It's a long weekend here in Cancun though in Mexico we call it a "puente" or "bridge" weekend. Whatever you call it, we've got Monday off for the Day of Revolution (which is actually Tuesday). We got up early this morning (no such thing as sleeping in for our two year old unfortunately) and decided to play tourist. We hopped on the bus and headed for Plaza La Isla, the fancy schmancy mall in the hotel zone. We had zero intention of shopping, there is nothing in our budget there (Bulgari, Ferragamo and Chanel don't really fit my lifestyle either, a two year old, a dog and a cat don't mix with designer clothing).
We headed for Casa de las Margaritas to see if they had their breakfast buffet, but they weren't open yet so we moved on. We saw a couple of McDonald's (I think there are three in the mall) but that wasn't what we were looking for at all. We ended up at Jugo de Limon, a sweet little outdoor restaurant that overlooks the dolphin pool at the Interactive Aquarium. Here was our breakfast buddy today.... (pics open in a larger format if you click on them, too big now that I see them but this took me long enough, I'll make'em smaller next time!) 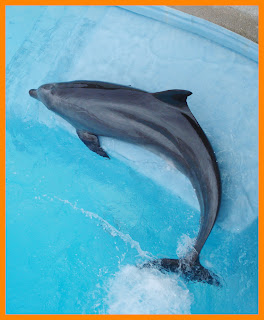 They had a decent breakfast special, hubby had a nice looking omelette and I had eggs benedict, coffee juice and lots of fresh fruit, nice to have something different for a change and 90 pesos for brekkie in the hotel zone ain't bad. The weather is nice and cool so it was great to eat outside, watching the dolphins play next to the lagoon.

Having fulfilled our dietary needs, we went to check out the Interactive Aquarium. We were happy to discover they had a really good discount for locals (regular rate 140 pesos per adult, locals rate, 60). Kids under 3 are free so Max was gratis. We showed our local ID, paid our 120 pesos and went to check out "feesh". As soon as we walked in Max started screaming "Wooooow! Loook! Mira!!! FEESH!" in his little Mexican accent. He was so excited, running from aquarium to aquarium and demanding "Mamita! Papito! VEN! Look! FEEEESH!". Here are some of the feesh we saw.... 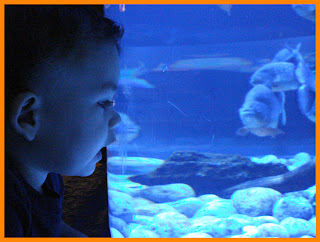 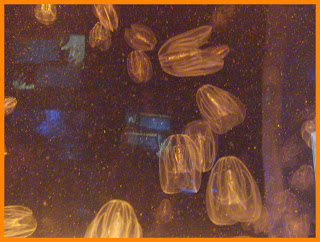 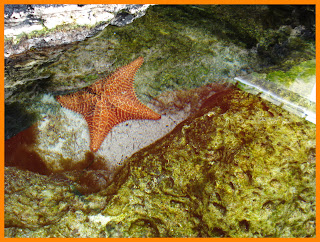 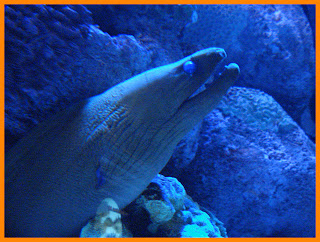 It's a rather small aquarium, just one room of tanks and a small outdoor area. After seeing the few tanks inside, out we went to pet a shark. There was a small pool outside with sharks, rays and turtles and the nice guide "called" them to us. He fed some conch to a turtle and the rays and got one of the sharks to come up to where we were. He held him (her?) gently and Max and Jorge gave her a pat (I was holding the camera, booo). 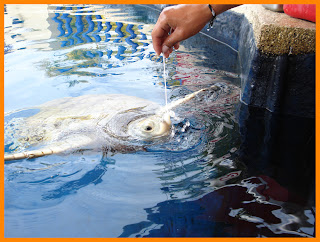 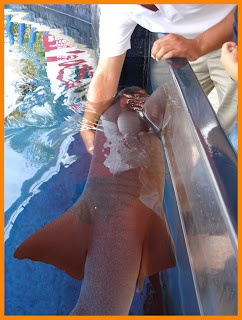 Next up was watching the tourists swim with the dolphins. However you feel about dolphins in captivity, it is really incredible to see these animals up close. When I first came to Mexico it was with the intention of swimming with the dolphins, but after four years I still haven't done it! It's definitely priced for tourists, $125 USD is a week's pay for me now. One day, one day, but it won't be at the aquarium or in a pool, I would prefer to do it in a natural space like on Isla Mujeres Dolphin Discovery. Even better would be the real thing, out snorkeling or swimming in the ocean and having them come to play, I have dreams about that! Here's a pic and a video, listen to them talk, there is no doubt in my mind that they have language. 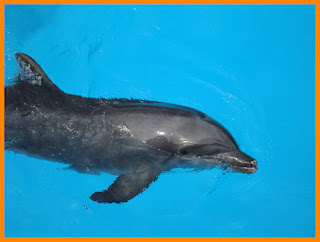 After the dolphins we ran quickly past the parrots (Max's one and only true fear is parrots, no idea why they are so scary but he could pet a shark). There was a huge shark tank with lots of scary looking, incredible creatures. I looooove sharks, some of my best snorkeling experiences have included encounters with them. There is something prehistoric about them and the beauty and calm with which they swim doesn't match their dangerous reputation. 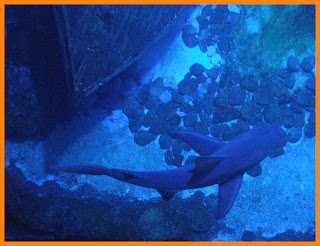 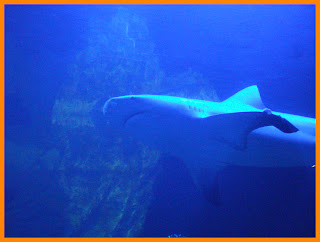 And that was that, short and sweet. It's a small aquarium, I've certainly been in more impressive ones, but it was a great Sunday morning diversion. We wandered around La Isla a bit more then headed back home on the bus. I guess the excitement was too much for Max, he crashed out as soon as we settled into our seats on the bus. 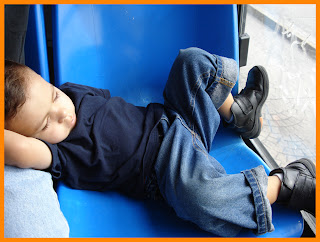 Max is just the cutest!!!

Hey girl i am tagging you but i already read you ....so dont worry you dont have to post again ...LOL
http://erlafontaine.blogspot.com/2007/11/8-random-things-about-erica.html

BTW love Max's pics......I wish i was just hanging out like that right now!

AND ...I cant believe you love sharks!!! I am terrified of them ....anytime i even go to freshwater where there are none i stay in the shallow end....even just looking at them in your pics make heart start pounding!!

Janie! Is that Janie oh goddess of trip reports from www.cancuncare.com? Yay, I am glad you found me, thanks for checking in!

Meaghan, we had a lovely time, thanks!

Oh Erica, sharks are amazing! It's very rare for them to attack a human, most of them just like to eat their little plants and fish, our flesh just isn't interesting to them. As far as I know, it has been years and years and years since anyone was attacked by a shark in this area of the world. The nurse sharks we often see while snorkeling are just beautiful (and their skin feels like sandpaper, too cool!)

Cool pics! I can see you had a fantastic time and that's a great pic of Max all tuckered out!

Hey, you should add swimming with the dolphins to your christmas list... who knows??? ;)

On a side note, doesn't it just piss you off how prices are in DOLLARS??? Last time I checked Mexico was a soverign country with it's own curreny, the good ol' peso thank you very much!

I returned to Cozumel this summer for this first time in years (big mistake! that place has become a tourist trap!) and my jaw just fell open when a vendor gave me a price in dollars! Joking (not really actually) I said I thought this was Mexico and I only had pesos on me and he just looked at me as if I had "pathetic" written all over my forehead and said that they only took dollars! WTF!!!!!!!!!!!!!!!

I had an uncontrollable urge to start hollering "Mexicanos al grito de gueeeeeeeeeerra...."

LMAO Fned! So true, so true. I HATE getting US money in my change (most often from taxi drivers) or having people talk in dollars. I think in pesos, my wallet has pesos (if I am lucky) and if I am going to think in dollars it's going to be Canadian, lol!

What awesome pictures! It looks like you all had a nice time. And a bigger aquarium doesn't mean its a better one ;) Sometimes more simple is the way to go, LOL.

I love that pic of Max sleeping. He is to cute!
~Jennifer