Brice has kindly reminded me of the most dreaded event of all things Canadian.....it's a four letter word, watch out.......S-N-O-W. Oh dear, I can't believe I actually typed that dirty dirty word. I hate it. HATE it. It's about the only thing that I actually HATE (ok, that and onions), but it is a serious revulsion. There is nothing good you can say about snow, nothing, zero, nada, bupkiss, it doesn't have a single redeeming quality, only horrible things come from snow. Hubby doesn't understand AT ALL why I don't want to go back to Canada, he sees pictures of snow and thinks it looks "cool". I say "cool schmool", it's fucking cold! (S-N-O-W is far more offensive to me than the word "fuck"). Here's some very valid reasons why I hate the cold icky stuff:
1. You have to wear clothes and lots of them. I prefer to let my skin feel the breeze and the sunshine thank you very much, I really don't like covering every inch of myself because the wind chill factor tells me that my nose will freeze in five minutes.

2. You have to wear boots, and not nice, sexy boots, you have to wear mukluks. These boots get wet and covered in salt and slime and sludge from walking the slushy streets. Snow doesn't stay white for long but boots turn salty white pretty darned quick. In addition to wearing boots, you must cart a pair of shoes with you wherever you are going, to the office, to a restaurant, a friend's house, who wants to carry footwear in their bag?

3. My glasses fog up. Walk inside, you can't see a damned thing and if it's snowing it's even worse, no windshield wipers on my lenses (though it's a fun thought).

6. You lose the use of fingers. Either you are wearing gloves or mittens which seriously inhibit the dexterity of the digits, or you have red, chapped, frozen hands that are good for nothing, not even picking your nose. Of course, you always have a runny nose so I guess having numb hands is good for the side wipe of snot.

7. Driving in the snow sucks. All the accidents I have had (only two thank goodness) have been as a result of snow and ice. People turn into bloody idiots driving in the snow too, it's like they are driving blindfolded while wearing headphones listening to Metallica and banging their feet on the accelerator and brake.

8. City snow is disgusting, I mean, really disgusting. Within minutes of a flurry, the snow is grey/black with oil and exhaust and dirt and grime and vomit from the drunks on the street and the flu-ridden. You can see where people (and animals I guess) have marked their territory in pee. Walking in city snow makes me wish for the power of levitation. When the plows go by and cover you in the yucky stuff, it's enough to make you vomit. Then you have to find a sherpa to help you over the piles of snow at every corner.

9. Snow TRAPS you. It's hard to do anything, you don't want to leave the house and if you do sometimes you can't! I have many memories of front doors being frozen shut. Or car doors. And windows. Nothing like having a car you can't use because the locks are covered in an inch of ice. There were a few months one winter where we couldn't FIND our car as it was buried in a blizzard.

10. It's really hard to go to the beach in the snow.
My old ugly snowy life in Toronto 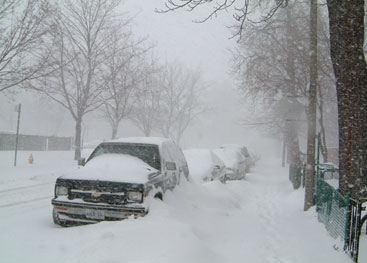 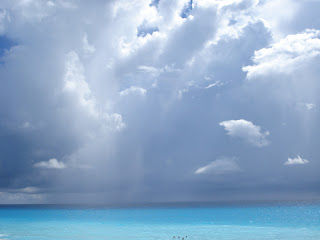 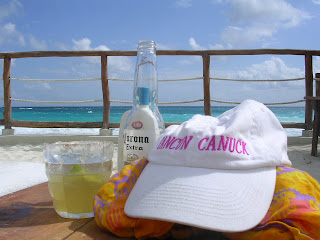 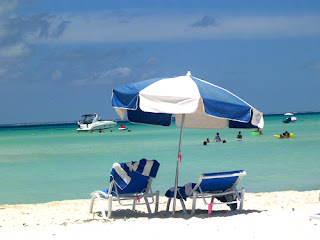 I suppose I do have one positive thing to say about snow, but since I am not a kid anymore, it doesn't really apply. SNOW DAY! Gotta love the days you didn't have school because the snow made it too dangerous. I could use a snow day without the snow please!

I think there might be some beach for me this weekend, just so I can send some sunny pics to my dear Canadian friends and family and say "Ha ha".
By CancunCanuck - November 23, 2007

I guess I must come from a different part of Canada (well duh I know I do) because a) not only do we not get snow like that, but b) I actually really love snow and snow activities. There's nothing like cross country skiing, snow mobiling, angel making, snow man making, snow ball fights, sledding, snow boarding and xmas lights just don't look as good UNLESS there's snow surrounding them. But I guess I didn't grow up in a city where snow was such a nightmare.

In Vancouver people flock to the mountains FOR the snow. You sure a snowman didn't attack you when you were a child or sumpin?

Now that's not saying I don't love the hot weather and beaches. I do. But I just love snow too.

Ahh, you are one of THEM, hahahahaha. Cross country skiing? A lot of effort to go nowhere in the cold. Snow mobiling is a form of natural selection whereby Canadians strap a 2-4 on the back of their skidoo and go looking for low hanging fences. Snow boarding is more craziness, strapping a piece of wood to your feet and throwing yourself down a mountain. I kind of like Xmas lights on palm trees. Snow man making is fun for about 20 minutes until all my parts go numb, then snowman turns ugly and grey and gets peed on the next day. Snow ball fights always ended up with broken glasses (or noses) for me.

I did grow up out on a farm, surrounded by nothing but white snow. But that meant I was trapped in my room on the second floor as the first floor windows were covered in snow. I remember my dad having to take a chain saw to cut a cave to get out the front door. I just realized I also have a pretty gruesome memory of a horse bleeding to death in the snow under my bedroom window after it was hit by a semi on the highway and had to be shot in our front yard.

So, pretty and white on the farm or dirty and grim in the city, still not convinced it has any redeeming values. But hey, whatever floats yer boat chica, you're not the only one who likes the insanity of winter! I just hope to never own a snow suit again. :)

Wow! I can really feel the hate oozing off the screen!

I remember the first time I saw snow. I was in college up in Indiana and when it started all the exchange students from the latin american countries were out in seconds! For a lot of us it was the first time we saw snow and we played in it for hours.

But I agree that a month later of walking on slippery ground (and falling on your face more than once), or having to bundle yourself up in sweaters like a tamale just to cross the campus or having to carry a pack of kleenex at all times for wiping your nose (messign up your makeup)... well, let's just say I was glad to come home.

I actually don't like the beach that much either... all that sand that gets in your hair, your eyes, your underwear... ergh! and that sticky feeling you get all over your skin when you come out of the sea... or the way your hair sticks to your back, all salty and sandy... or that heat that just makes you not want to step outside the air conditioned house, mall, car, etc.

I loved Puebla's weather... chilly in the mornings and evenings and warm in the afternoons.

Pretty hilarious post, there, Canuck! Living here in Portland we don't really get much snow (sorry to just throw that word around like it was nothin'), so when it DOES snow the whole city pretty much shuts down. We don't salt here, we sand, and that does nothing really for traction, and all the yuppies with their SUVs tend to drive like it's August even though there are 2 inches of ice on the street. Lots of wrecks but if you make it to work in time to turn around and go home, you still get paid. THAT'S winter to me. As for horrible very bad words, to me, that word is R-A-I-N.

I think the progression of photos just brought me to orgasm.

Make Hubby sit in a bathtub of icewater for 5 minutes. Then he'll understand snow. Or have a new fetish...

fned, you had to bring up hair sticking to you back, lol! Remember the hair phobia. :) I love the sand everywhere, nature's exfoliant.

JJ, you and your filthy mouth, haha. Rain (gasp!) gets to me if it's long term, but I can take the small showers.

Brice, glad I could liven up your morning. ;-) I think for now I will continue to bombard Hubby with pictures of nasty weather. The ice bath will be Plan B.

I too am one of those crazy women. I love snow. Although now that I have kids, and it means they are cooped up in the house and can't go out, so with each passing snow day my hate for it rises. I do love the warm weather though - swimming weather is always nice.

I love your pictures! The snow ones as well as the beach ones.

I love snow! For about 10 minutes. Then it pisses me off. But there's nothing like the coziness of being inside during a snowstorm.

Plus, people in this region tend to be assholes most of the time, but then once the snow starts, everyone is all chummy, Norman Rockerfeller style.

When I went to school in Maine, we got more ice than those did inland since we were on the coast. But after one horrible storm, it took me about 45 minutes to get the car ready to go. I spent a few minutes holding my lighter to the car door just to melt the ice to get the door open.

Oh man, you really do hate snow. The line about city snow being dirty with oil, dirt, grime and vomit did it for me. Yuck! Snow is a bad 4 letter word.