I was happily (if sleepily) teaching class this morning when I received a text message from Hubby telling me it was urgent to call him. When I see urgent now, I automatically think "something horrible has happened to my baby", total mama response. So, in hearing that nothing is wrong with Max, any other news pales in comparison and really can't be that bad. Hubby was calling to notify me that we had just been robbed. At 7:30 am, broad daylight, with people all around. The neighbours saw someone coming down the building stairs with their arms full of copper pipe and called the cops. The neighbour and the cops gave chase, but to no avail, thief and pipes gone gone gone. This might not seem like a big deal, and in the grand scheme of things, it's not, but copper is EXPENSIVE and we don't have water! I didn't quite understand why anyone would steal pipes, but discussing it this morning, turns out thieves can get 200 pesos per kilo of copper. I don't even want to know what it's going to cost us to replace those pipes. Since we won't have water til we do replace them, I guess I will find out pretty quick just how much. So, not a horrible tragedy, just a royal pain in the ass and a scary moment thinking something really bad had happened.
Being as camera crazy as I am, of course I have pics for you! (Not nearly as pretty as the vacation pics below, sorry, no making plumbing look pretty!)

The Roof (the arrow shows where he cut the pipe) 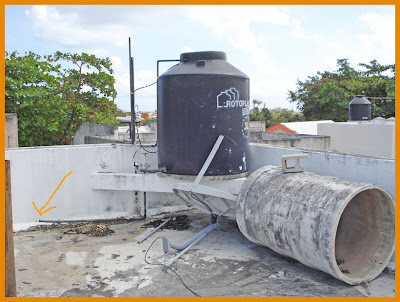 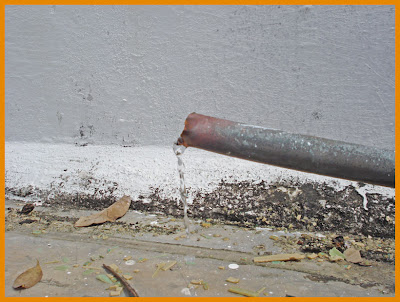 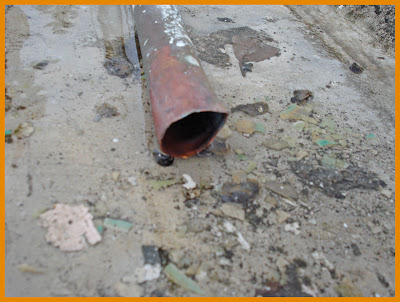 Ok, while writing this post, the lovely super handy man K showed up (thank goodness for local forums and cries for help). He'll be replacing the pipes with plastic, not copper, so it's not going to break the bank, thanks K and thanks www.cancuncare.com for the fabulous folks in the forum!!
By CancunCanuck - February 14, 2008

And that's when the global market comes and bits you in the a$$. It's good you are not going back to copper. You know that in Guatemala the cost of minting the $1 Quetzal coin (local currency: 7.50 GTQ = 1.00 USD/CDN) exceeded the $1GTQ and thus they went back to printing bills (made in Canada) and all because of copper.
Last year, somewhere in the GTA, up here believe it or not, a copper statue disappeared and the head of whoever it was showed up on a scrapyard.
Your pipes (that just sounds wrong) are probably on their way to China as we speak.

People suck!They are doing that here too in Colorado. They are stealing wire from the lamp posts. I too am glad you are going to plastic! It will be better in the long run

I'm glad it was just the pipes. Plastic is a good deal. Here in the state, most domestic water systems are now being done with plastic (PEX Tubing) due to the outrageous cost of copper.

I actually like the idea of plastic as it just seems cleaner. And cheaper and hopefully that won't get stolen. But you know....all kinds of shit happens!

Yep up in MN they will break into vacant houses or new construction and strip all the plumbing and wiring for the copper. So sorry to hear this. We will be in Cancun on the 27th yipee!!

So sorry to hear this has happened to you. It feels so awful and to think that somebody unknown was up. It still happens in Minnesota but they require all scrap dealers to photocopy ID of anybody selling copper. Of course, only as good as the scrap dealer!

Yup, the copper thieves are in Merida too! Not only that but apparently they still the water meters. The JAPAY (water agency) requires a police report before they will replace the meter. I think you still have to pay for it. My friend was thinking of replacing her copper pipe that got stolen with more copper but was going to hide it in pvc. PVC need s to be replace more often due to sun damage, but heck it's got to be cheaper than having them come back and still your NEW copper pipe too!
regards,
Theresa

Oh, before I forget, I can't make it to the blogger's conference after all. April 17th is the 15th birthday of La Hijita de La Muchacha, and I am helping with the food. My husband refers to her as his future daughter-in-law but I think she is too bright to marry my (kinda self centered but adorable) son.
regards,
Theresa

Oh man Kelly Im sorry to hear that....glad is getting fixed....but Karma will come back to that little &^%$## who did that!

Glad everything's okay. And replacing with plastic is cheaper and less likely to be stolen...

Crazy what people will do for money, huh? Glad your getting plastic this time!

Where are the days when people stole GOLD and silver people????

I thought that's why we made pipes out of copper, because it was the ugly duck of metals!!

Seriously though, sorry about this happening to you but glad it was only the water pipes.. imagine our house gas pipes were also made of copper (or are they?).....

Manolo- Amazing how often the global market hits home, isn't it? I love that the coin was going to cost more than it was worth, sounds like a very Mexican move. Perhaps my pipes are starting a new life as a statue somewhere in China. :)

Scott- Interesting that the whole water system is being changed by this, I hope that the shorter life span of plastic doesn't interfere with the clean water you are so lucky to have.

Liz- I like it too, when I think of copper, I think of putting pennies in my mouth as a kid and that flavour just doesn't scream "drink water from me". And hell yeah, if someone steals the plastic ones there will be some ass kicking. I will call you for help.

Wayne- It does feel weird to know that an unknown person violated our space, even though they didn't get inside the house. And oh yes, those reputable upstanding citizens known as scrap dealers...hahahahahahahahaha.

Theresa- They have been stealing the water meters on our street for a long time now, though no police report is required to get it fixed. I think Aguakan just cruises by every couple of weeks to see what is gone this time around. We didn't really have the budget to do copper, though sounds like your friend has a good idea. Sorry to hear you won't make the meet up, but please have a wonderful time at the fiesta with the possible future daughter-in-law!

Jennifer- Sucks is right. Definitely good to know that the neighbours are on board and that good friends came through to help us get it fixed fast.

Erica- Karma is a bitch, lol! He will find himself with a bad case of the runs and no toilet to get to one day. :)

Brice- Yep, we're all good. Cheaper is better and we've got water! Not the best water, but water.

Heather- Crazy people everywhere man, I'm sure you're hearing some good stories of that in Detroit, the real nut bars come out there! ;-)

Fned- Thank goodness they weren't after gold and silver, then they would have been in my house and sorely disappointed. And no, I don't think the gas pipes are made of copper. I was going to say thieves aren't so stupid to mess with gas, but that would have been an outright lie.

Gas piping is typically cast iron in the US, but I am unsure about it's makeup in Mexico. Cutting gas pipes would make for a shorter career for the thieves though.

I have never heard of ppl stealing this in DR, but sure enough I will hear about it in less than a month@!! You'll see!! LOL...
Im glad everything is fine, and plastic is great!!!