Once again, yes, we went to the beach on Sunday. Now that we've got the car, we have soooo much freedom to explore Quintana Roo and get out and see some new things instead of the same old boring beaches (haha, like a beach could ever be boring). This week we decided to check out Isla Blanca, a small peninsula located about 25 minutes away from Cancun.
Driving past Puerto Juarez, you'll find yourself on a beautiful street lined on both sides by lush plants and flowers, great to see undisturbed nature only a couple of kilometers outside of downtown cement Cancun. For the first part of the trip it is a paved road. When you reach the entrance to Isla Blanca, you are in for some off-roading fun on a sand road full of potholes! We bounced around and got very dusty, wheeee! (Though on our return, we did get stuck and needed the assistance of four burly men to dig us out of the sand). 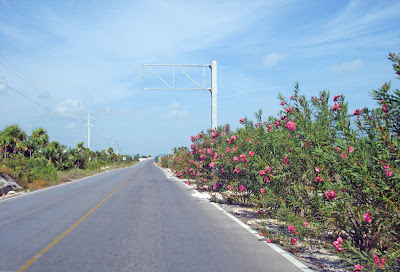 The Sandy Road of Isla Blanca 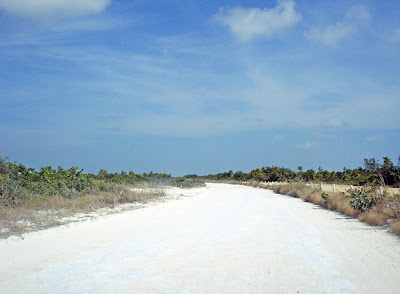 We drove for a few minutes in this luscious land until we saw the skull and crossbones, "Argh, ahoy matey's, this be the place for us". Ok, yep, I have a pirate thing. We had no plans about where to go, but this looked like as good a place as any to start. We pulled in the bumpy driveway and found ourselves in "El Refugio del Pirata Morgan" (Pirate Morgan's Refuge). 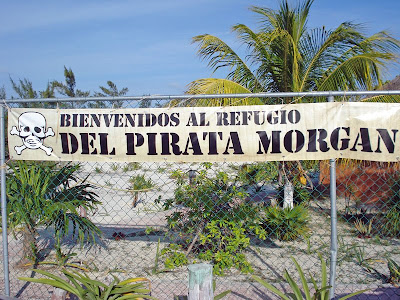 There was a small charge to enter (25 pesos per adult, 15 for kids) and that gave us use of the beach club facilities (bathrooms, shower, chairs and tables, loungers, etc..) There was a reasonably priced menu (the most expensive thing was ceviche for 80 pesos) and wait service on the beach. The service was slow, but we were in no rush. We could always have gone up to the beach bar if we felt pressed for time or were suffering unbearable thirst. There is a 150 peso charge to bring in a cooler or refreshments, they did check our cooler but let us go in with the milk and kid snacks for Max. They had kayaks, ATV's and jet skis for rent, though we didn't play so can't tell you much about that experience. There were a couple of groups of tourists there that had been brought from some all inclusive or another, doing a package deal. I overhead (um, listened in?) the owner telling them that their day included the ATV's, jet skis to a snorkeling spot and a full meal, though I don't know how much they paid for that. 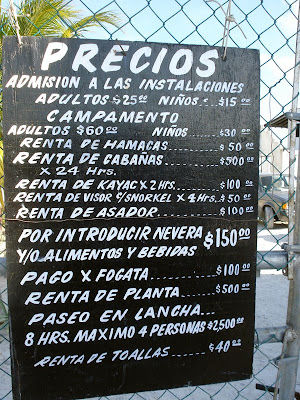 The place also had ten little cabanas available for rent. These are your no-frills, palapa-roofed, no electricity, you get four walls and a bed kind of cabanas, but the location is great. Renting the cabana is 500 pesos per night. There were generators running for electric in the day, but I don't know how long they leave them on. They've also got an area designated for camping, so whip out your tents and get a spot for 60 pesos. Here's the view walking past the cabanas toward the beach. 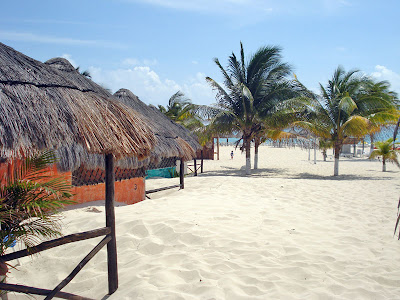 The Cabanas viewed from the beach 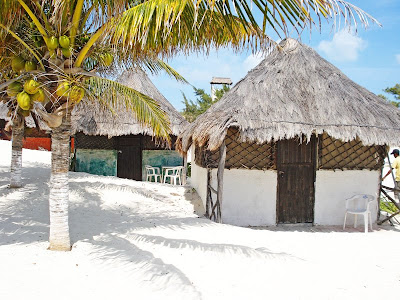 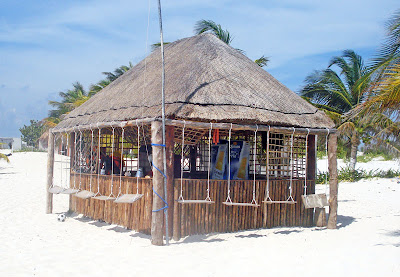 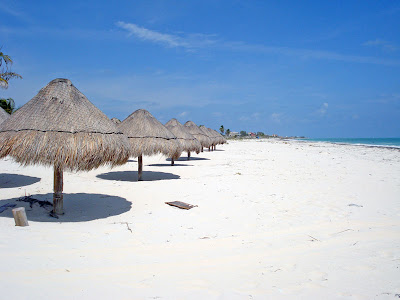 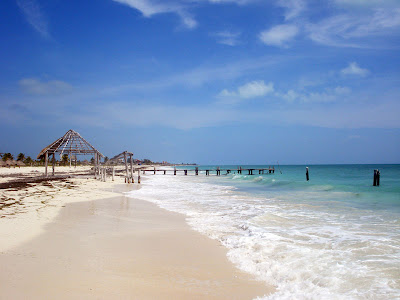 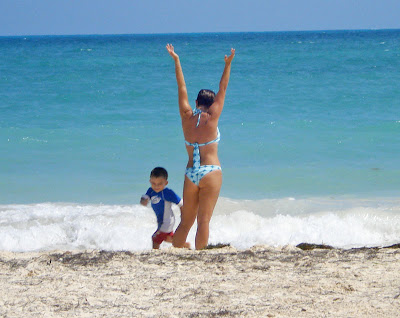 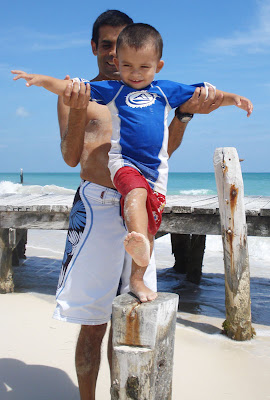 We really enjoyed our day and will go back to El Refugio. Can't fight the pull of the pirates! It was great to get out of the hustle bustle of Cancun and find a relatively peaceful stretch of beach. I think at the busiest point of the day, there may have been 60 people there, pretty darned quiet indeed. I've decided that when we win the lottery (yes, I said "when", I'm using my powers of positivity to swing those numbers my way), I would like to buy a piece of land on Isla Blanca or in Puerto Juarez. I'm loving discovering new parts of Quintana Roo, I hope you are enjoying the ride with me!

For 7 of my 8 trips to the Yucatan, I have stayed in Puerto Juarez. For me, at least, it can't be beat.

Hey Kel it looks like good fun! Do they have loungers to lie on?

Scott- If we had the financial means I think we would buy out there in a heartbeat, it's lovely and the prices are not as high as other beach front places. Lots of good things about Puerto Juarez, Playa Mujeres and Isla Blanca.

mexpat- LOL, thanks matey, glad to have ye aboard, argh.

Liz- Yep, tables, chairs and camastros. I saw a sign somewhere that they were rentals, but they didn't charge me for using the lounger.

I'm impressed. Last time we took a drive out to Isla Blanca (2006) there was not a beach to be seen. All the land was fenced off as private and you couldn't even see the water. We finally ran out of road and had to turn back. I think you may see us over there sometime soon. I would love to do an overnight. Thanks for turning me on to this spot!

Great pics as always. I love them. You are so blessed to be by the beaches. I hope I get to see some soon. Email me mama.

Wayne- We saw lots of "private property" signs for sure. El Refugio was the first (and pretty much only) place we saw that had a public entrance. We did drive down to the tippy tip of the island where there is a public beach, though that is where we got stuck in the sand so we never did find the entrance through the big fence. There obviously was a way in judging by the romping sun bathers and the plethora of cars (we were not the only ones stuck in the sand). Check it out again if you feel so inclined!

Susan- I am very blessed, I know! You'll be at the beach in no time mama, enjoy it!

hey everyone?
canukcancun i wonder if u have pirata morgans celphone or any number,
thanks alot!

Alan- Sorry, I don't have any contact for them, wish I could help! I'm quite sure they don't have a land line, they only occasionally have electricity. I'll try to remember next time we are out there to ask if there is a manager or contact info. Wish I could help more!

HELLO There as FEB 25 2013 - REFUGIO del PIRATA has LOTS FOR SALE - people interested can contact me in US via email dallasaltapatio@gmail.com thanks carlos