And the nausea and the heart palpitations. I woke up this morning thinking (obsessively) about my FM3. The FM3 is the visa issued by Mexican immigration that allows me to live and work here. Mine expires April 21 and I am already stressing out about it. The whole procedure should be so simple but of course it never is, we are dealing with a government agency here.

Last year was the worst experience I've had yet with the whole process. Two months to complete everything, something like 14 or 16 visits to the immigration office and more tears than I care to tell you about. Having done this a few times now, I have files of my past applications so I figure what was good last year is good for this year. Not! They always seem to find one more piece of paper (in triplicate) that they need. The rules and requirements change from week to week. They LOSE whole applications or parts of applications. I have learned to bring an extra copy of everything and have them stamp it as received and I get the person who received it to initial or sign it. That helped me out last year when they lost several pieces that I had brought them. The last straw for me last year was when I went into the office to pick up the (FINALLY) completed visa only to be told that I hadn't paid. Wrongo, I had paid and brought in all the necessary documents and photo copies of documents and luckily I had my own stamped, signed copy. Of course they wanted to fight with me, telling me they needed the original, not a copy. Ummm, I GAVE YOU THE ORIGINAL. No, you didn't, yes I did, no you didn't, yes I did, until I saw the man who had taken my proof of payment and he actually admitted it and admitted he had lost it. Grrrrr. And the circle goes on and on and on.

The month before renewal I am tense. They can (though likely won't) refuse to renew and I can be deported (been there, done that, twice). I've been told by people on the inside that they won't deport someone who has a child born in Mexico, but then again I have heard stories of them doing exactly that. The two times I was deported they gave me fifteen days to leave the country. So here I am living my life, working, taking my son to school, paying taxes and BAM, adios amiga! The thought terrifies me.

I know I shouldn't get all worked up over this, but it is my life at stake. This year I am going to take the advice of some friends and use a lawyer for the whole thing. He charges more than the FM3 costs, but I figure if he can save me all the aggravation, I am IN like Flynn. It's going to be a bit of a confusing year, I have to decide if I will make a change to an FM2 (and see if I am eligible to do so) or stick with the FM3 for one more year. I would like to apply for Mexican citizenship, in which case the new laws (they change frequently!) state that I must have an FM2 not an FM3. I'm open to advice from anyone who has done this or knows what this weeks rules are!

I have heard that the difficulties we experience in the Cancun immigration office are not found in other areas of Mexico. Some places seem to welcome foreigners and make the process a whole lot easier. I guess soooo many people want to come to Cancun to live La Vida Loca that they try to scare people away and make their lives miserable enough that they leave.

I don't want to argue about what should or shouldn't be, or whether I have the right to complain as I am in a foreign country, we get enough of that on the forums. I don't think I am really complaining as much as I am expressing my fear and anxiety about having to go through the whole thing again. If life treats me kind, I will become a Mexican citizen this year and won't have to go through this ever again!

My Beloved (though abused looking) FM3 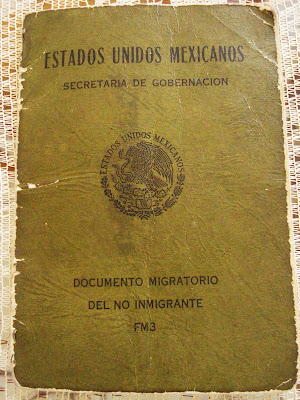 (And for those of you who missed the joke of the post title, you obviously didn't grow up with Frank in Rocky Horror, check out this classic video, the joke is close to the end but you shouldn't mind watching the performances!)
By CancunCanuck - March 11, 2008

Use Mauricio Mendoza's services, and please quit worrying. It will all be fine. I know it sucks, but it will be fine.

If you go for the FM2 then even if you don't become Mexican you are on the road to Inmigrado status which also means no more dealing with stupid INM.

Ok, a little salt in the wound. Last year was the easiest year ever for us to renew. We actually walked out of there smiling! Maybe because we live on Isla, not Cancun proper. Who knows.

My understanding is that you get your FM3, year 1. You have 4 renewals, years 2, 3, 4 and 5. Year 6 you must start the whole procedure over as if you never had an FM3 OR submit and go up to the FM2 status. You do that for the same amount of time on the FM2 THEN you can apply for the citizenship status. So ten years in total. I bet they won't even let you apply for the FM2 until you have exhausted all the FM3 renewals.

I would really listen to Rivergirl though. I agree that they will not deport you. (p.s. you could try taking Max with you and holding him in your arms at that counter. Now who in their right mind would be mean to that cutie's Mom???)

I've got no experience with the FM3 process yet, but I do have some Rocky Horror experience. I've seen it about 50 times. My whole senior year of high school (79/80)I think I went every weekend to the midnight show with a bag of stuff under my arm.

Good luck! Bonne chance! against the big bad bureaucratic mess ANY Latin American country has, and be ready to line the hands of some mid level officials... oh the joys of living in the tropics (that is pure envy talking after an "almost record breaking" season... I am talking the s-word, I tell you whatever it takes your papers are totally worth it ;-)

I just notice... that is quite the name of the little document: "migratory document of the non-immigrant". What the....?

As a Canuck in Patzcuaro, I am thrilled to say that our trip to the immigration office in Morelia is a piece of cake.

Including waiting in the office and the trip to the bank it took 45 minutes.
Back a couple of weeks later to pick it up and that it for this year.

Oh I hope it'll be nice and easy for you this time around. I know how it is like to be on that side of the fence. Trust me, it doesn't get any better here in USA. :S
Good luck!

I used to deal with this for myself but now I do it daily with hubby. I wish we could all just live where we want and all would be well, lol! Oh in the dream world how things would be different. GL chica!

Grrrr, I just replied to all your comments and lost it, stupid Mac! Here I go again...

Rivergirl- Yes, I will be using Mauricio's services. I know I shouldn't freak out, but my years of anxiety disorders (mostly recovered!) tend to re-emerge this time of year. ;-)

Wayne- Lucky you, I hope it goes as well for you this year! I know that there are some exceptions to the FM3/2 rules and have been told that I may be one of them. I can apply for citizenship as soon as I have my FM2 because I have a child born in Mexico, I don't have to wait (or pay for) the five years of FM2. Rivergirl is my resource on this, she knows her stuff!

Scott- Oh man, I STILL want to be Columbia, I think I could whip out a great tap dance and song from her repertoire right now if someone dared me. When's the last time you went for a midnight showing? :)

Manolo- Yes, it really is all worth it in the end, there will be some celebratory margaritas once the papers are in my hands! And yes, crazy title for the document. Technically I am "non immigrant", they consider the FM3 to be temporary.

Todd- Lucky you, lol! I have heard that it is much easier in other parts of Mexico. I think the Cancun office is swamped with applications, we get many, many Central and South Americans coming for better jobs and Yanks and Canucks and Brits coming for the sun and sand.

a.- Immigration is never a pleasant experience for anyone, in any country (not that I have heard anyway). Thanks for the wishes of luck! Y mucho suerte a ti, hay viene el bebe muy pronto, si? :)

heather- Awww, world without borders, dreamy! You've had lots of experience with borders and immigration, heck, you've probably lived in more countries than many people visit in their lives!

If you don't mind me asking, how were you able to re-enter the country after being deported twice? I guess I'm just thinking of the really restrictive US immigration law, where people are banned from returning for 10 years if they're deported (or something like that). Does Mexico not have something similar? Or if I go there, and, say, overstay my visa and get deported, can I just saunter back in as if nothing went wrong? ;-) I hope you don't mind me asking, I'm just curious how it works down there.
Jen

OH! I forgot to add, good luck with everything! I hope it all works out fine!
Jen

Wishing you good luck on fm3, can relate a bit here in Belize you can ask 5 people about going through a process and everyone is quite likely to give you a different answer as to how it happened.

Jen- I've had a few emails asking for details on the deportation, I'll be blogging it ASAP. Basically if you overstay or get deported (in SOME circumstances), you just have to leave Mexico for 48 hours. Most folks here just head down to Belize, which is exactly what I did.

tacogirl- Thanks for the luck! I don't think immigration is easy anywhere, I'm not surprised that Belize has the same inconsistencies. My two experiences at the border proved that they are just about the same as the Mexican officials. Money talks! ;-)

If it makes you feel ANY better, it is just as bad, if not worse, here in Playa. I have our corporate attorney handle it all. Last year, our "upcharge" for a family of 5 was $1000 bucks and a pizza. Hey, whatever, just give me my d@amn FM3!!