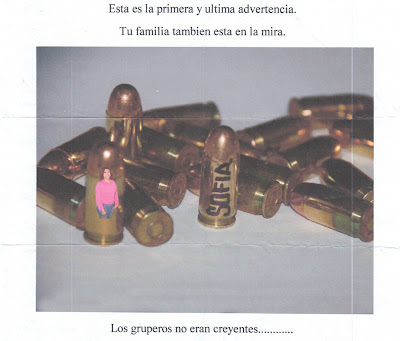 The picture above is a copy of a "letter" received by my friend/boss last week. In fact, she received two of them. For those of you who are "Spanishly challenged", it says "This is your first and last warning, your family is also in the sights. Los Gruperos ("the groupies", but someone said it's a specific group) aren't believers....".

Both letters were sent to our work address though they each had a separate return address, one from the U.S., one from Tamaulipas (another state in Mexico). Neither of them were actually sent from the return address, they were both stamped as mailed in Chiapas, on the same day. The work address is typed exactly as it is listed on the company website (and yes, her name is on the website too). She has reported this to the owner of the company and asked other directors to watch their mail, so far no one else has reported receiving anything similar.

My friend/boss doesn't know anyone named Sofia and she doesn't know the woman in the picture. She also doesn't know why anyone would go to the trouble of sending this to her from Chiapas. She has no known enemies and no known problems with psychos. She has not told her husband as she says he will go a little crazy. She has not phoned or reported this to the police because, well, we all know how effective that might be. No demands have been made, there was no request for money, nothing other than what you see above. SPOOKY and WEIRD. At first she laughed it off, but she showed it to enough of us who freaked out that we may have freaked her out a bit in the process.

My guess is that it is nothing to worry about, but there is that nagging feeling (yeah yeah, I know, lose the nagging feeling Canucka) that this is something she should be afraid of. I don't know what I would do if I received the same thing, (blog about it first, lol). I think I would go to the police, just because that's an ingrained Canadian habit, but at heart I know there would be nothing they could do. I guess I would just like it to be on file for when the bullets started to fly. At the very least, it didn't go to her home address, though knowing where she works is good enough to find her.

So there ya go. I'm creeped out. Any suggestions, comments, queries? Anyone know anything about threatening letter scams in Mexico? Should she be changing her identity and moving to Tahiti?

Although it just doesn't sound like anything valid, especially since they are not asking for anything, I would still not totally dismiss it. I think your boss needs to look a little deeper. Relatives in Chiapas? Zapitistas connections? Going to the police would just be silly and useless. Google that return address? Too bad it wasn't mailed from the States. They take terrorist mail seriously. It would have scared the shit out of me, having received threats myself. Keep us posted on this.

related or not related?

Last week a friend was one of what I heard were thousands in this area (Cancún and Riviera Maya) who received a phone call saying 'we have kidnapped your son'. He has no kids and laughed at them but what we have heard is that some people have actually paid money and others have been frightened. It was a hoax in that they had not kidnapped anyone.

It could be that this is kind of like spam in that they send out bunches of them and hope that they hit someone who responds.

I could be off base with this though.

hmmm that is not a very nice thing to do .....im freaked cuz my baby is SOFIA....but shes safe in jersey :)....anyways is there any mention of a name Sofia on your company site and maybe they assumes that was your boss????

My first instinct is that this is a hoax/prank/scam. I think that if it was real, they would have sent an actual bullet instead of a picture of some bullets.

But, on the other hand, threats can be scary regardless. If I was her, I would definitely tell the husband and keep your eyes open.

Sad that some people have nothing better to do with their time than putting unwanted fear in people.

I hope that the karma Police catch who ever is doing that and give them a taste of their own medicine.

Will send thoughts for your friend/boss's safety.

my first reaction was gobsmacked that MexPost made a timely delivery. Or maybe the letter was mailed years ago and meant for someone else.

I would TOTALLY trust your gut though. the gut is so much smarter than the brain. Stupid brain.

Is it at all possible this is related to your husband's work? (IIRC what he does)

I really hope you're wrong and if you're right I hope for calm and peace.

Yes this is rude.