For oh so many reasons we opted not to have a birthday party for Max this year. Instead we decided to take him on the Captain Hook's Pirate Ship dinner cruise. I know, normally you don't think dinner cruise for a three year old's birthday, but this one is definitely fun for the kid set. It's also a whole lot less stressful to arrange and pull off than a party for thirty three year olds, and super bonus, no Barney!
Max has been talking about this FOREVER and was super pumped about the whole thing. He was charming the crowd while we waited in line, running around saying "Argh!" and making his pirate face. He's really coming out of his shell with strangers, walking right up to people and saying "Hi, what's your name? My name Max." and holding out his little hand to shake. He blows my mind when he knows which people to speak Spanish to and which ones speak English, he's a smart cookie. Anywho, I digress.

Here's the pirate dealio. Two big ole boats, one red, one green, packed to the rafters with tourists. The pirates put on a show and run games and contests throughout the night. All drinks are included and I have to say that the service was great this time, a smile and a wink to the waiter goes a long way. There were lots of kids on board and they all seemed to have a great time, lots of smiles and laughter and dancing. I would say this tour really is fit for all ages, there were babes in arms up to teenagers. Adults can certainly enjoy it without kids, though I suspect the "late" cruise is a bit less family oriented (there is a 7 pm and an 11 pm cruise most nights). After heading out to sea and having a few drinks and a few laughs, they do a really great job of hustling everyone into the large dining cabin down below for dinner. You can opt for steak, lobster or steak AND lobster, plus salads, veggies, potatoes etc.. Food wasn't horrid, I've certainly had worse fare on tours. We had arranged for a cake for Max, and while we waited for what seemed like forever, it was worth it for Max when the Captain himself came down to deliver it and sing "Happy Birthday". We shared the cake with those left in the dining room, no way was I going to eat a whole delicious, sticky, sweet chocolate mess by myself!

After dinner everyone heads back to the upper decks for more drinks and more show. Then the big show starts. The two boats come together for a battle, pirates flying from ship to ship, fireworks, the whole shebang. Our boat was victorious, long live the green boat!

From there the boats head back to shore with the Cancun anthems playing (you know, "Follow the Leader", "I Will Survive", "YMCA") and people dancing their tequila soaked bums off. We were back on shore by just before 11 o'clock. Of course, Max fell fast asleep long before he could boogie to "The Electric Slide" so we just bundled him into the car and headed on home.

Overall a good time was had by all. I would have enjoyed it more if I hadn't started getting sick on Friday, runny nose and cough and cold medicine don't mix well with piña coladas and disco music. But, I laughed and had fun with my little pirate Max and seeing his smiling face made things a whole lot better. 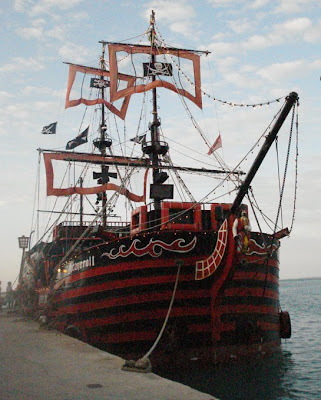 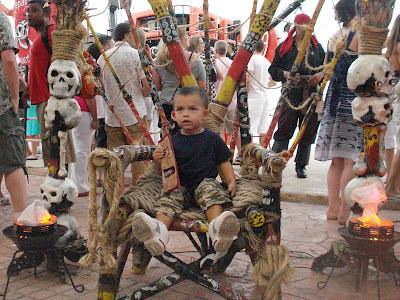 Pirate hanging out in front of the sunset 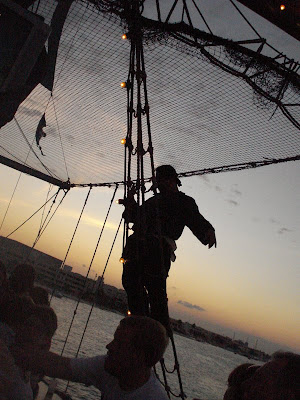 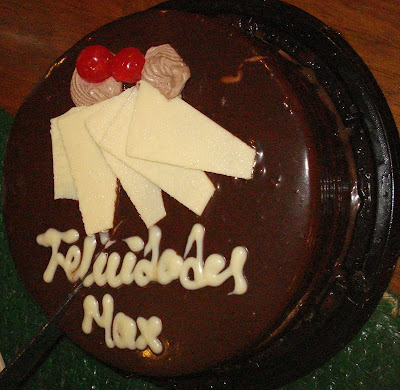 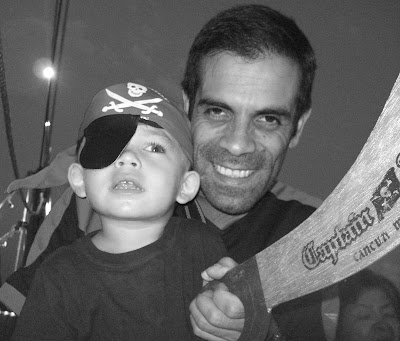 That is so great, better than a pirate theme birthday by far!! When we make it down there, im so going on that, lol!

I didn't do the Pirate Cruise when I was there, but other tourists said they loved it. Knew it would be right up your alley!
:)

Sounds like Max had a the coolest birthday! I mean wow! Pirates!!
I'm sure he loved every second of it .... oh! and the chocolate cake looks yummy!!!

Looks like fun was had by all! Happy Birthday Max!!

Max is such a cutie!

AWWW i want a party on the boat so i can dance my tequila soaked bum off too!!! LOL anyways Happy Bday Max!!!!

yumm pirates lol wheres the pics of em lol....glad to see max had a great bday