Oy vey, what a day of witnessing STUPID and irresponsible parenting! I "rescued" two, yes two babies from drunken idiot parents. Don't get me wrong, I am not condemning people for drinking, but sheesh, when you've got a small child in your care, PUT THE BOTTLE DOWN or pass the child to a non-drunken idiot please.

Rescue Numero Uno
We were getting in the car at 9:00 this morning to go to the beach. Hubby got a call on his cel phone and I just heard him say "Ahorita voy" ("Going now" or "On my way"). WTF? Where could he possibly have to go at 9 am on a Sunday morning? Well, we have some "friends", not even really friends, just a couple with a small child who have glommed onto us and actually moved into an apartment half a block away to be close to us. The male half of this "charming" couple had called Hubby to tell him that they had just had a big fight, that the female half was drunk (9 am???) and he had left. He wanted us to go and see if their 9 month old baby was ok as the baby's mama was trashing the apartment. Sigh. Again. This is not the first time we have received this type of call from them. So, we went to check. Hubby went in and two minutes later he was walking out with the mommy and the baby and getting into our car. She was drunk and sobbing with a black eye and split lip. The fight had gotten violent. Again. I feel so bad for this little baby. We drove her to her mother in law's house to drop off the baby (I couldn't even let her hold him in the car, I didn't trust her booze soaked arms). We got to the suegros' house, she got out, threw the baby in the father's arms and screamed obscenities as he told her never to come back and that she would never see the baby. She said, don't worry, I won't ever see you again. Ugh, talk about early morning drama! We drove her home so she could clean up the broken windows and tchotchkes and the mess their fight had made. We haven't heard back from either of them today, we'll see what happens tonight once the booze starts to flow again. It's such an ugly situation that Hubby has actually talked about taking the baby and raising him ourselves, poor little guy shouldn't have to live in a house like that.

Rescue Numero Dos
We decided to check out Playa Tortugas today, it's been years since we've gone, the last time it was a mess of drunken fools but someone had told me that it was different now. Uh huh. 11:00 am and there were plenty of borrachos to go around. Hubby had gone to the Oxxo to get us some drinks and I saw a little baby sitting on the edge of the ocean with another little boy. The baby was probably seven months old, the boy about three or four years, no adults around. I was looking around for parents, that baby could barely sit up by himself and he was right near the water. I hoped they were right behind them, but you never know. Out from the ocean like a zombie walked a very very drunk man. He fell down a couple of times, could barely walk. He went right over to the kids, sat down and picked up the baby. I was really on alert now, I didn't even know if he knew the kids, drunks do love their babies! I was watching closely when suddenly he dropped the baby, FACEDOWN in the ocean. His reflexes were way too slow for my liking, so I jumped up and grabbed the baby, ready to face the consequences of an angry drunk. I cleaned off baby's little face and he buried himself on my shoulder, crying his little heart out. I kept asking stupid borracho if the baby was his but he could barely speak. I asked the other little boy where the daddy was and he just shrugged his shoulders. I asked where mama was and he pointed...at the whole beach. Drunkard just kept saying "Estas mejor con ella bebe, estas mejor con ella" ("you're better with her baby, you're better with her"). Well DUH, at that moment of course he was better with me, you just about killed him you freaking dumbass! FIVE MINUTES LATER the baby's mother finally came, took the baby from my arms without a word and went back to her table and HER BEER. Unfreakingbelievable.

Here's the drunk and the kids moments before the rescue.... 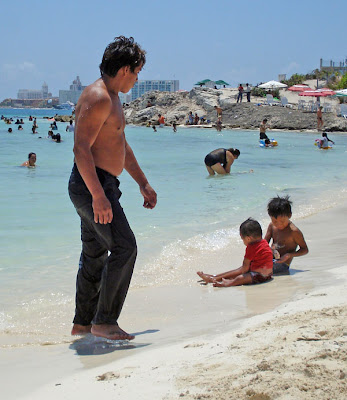 We won't be going back to Playa Tortugas any time soon, there were more caguamas than beach towels. For a place teeming with families, having the drunks outnumber the sober people was just absolutely appalling. Go get your groove on, we all need to tie one on SOMETIMES, but leave the kids with a nanny please!
By CancunCanuck - May 18, 2008

I'm glad you were there. Drunks are definitely the worst part of Sundays at the beach. Here it is the same.

Whoa... what craziness. What a good thing you were there for these kids! I can't believe the drunk man dropping the baby... That's so scary! Take care!

This just reinforces my belief that some people need a license before becoming parents. You will most likely be remembered as that childs guardian angel and they are blessed that your hubby and you were there when they needed you. So scary!

aggghhh pinche viejo!!!! and the lady too... they should be locked in jail! ugh... spooky story :S

mega urgh!!Good thing you were there on both accounts, but seriously, how did you meet your drunk-violent-stalking ("moved down the block to be closer to us" WTF?!) vecinos???

What would you do without some telenovela-style drama in the morning (and at lunch and at dinner)?
On a slightly more serious note the first story reminded me of Tracy Chapman's "Behind the walls"... oh the soundtracks of our lives.

The sad part of this is that it's totally not uncommon!!! Yikes!

Isn't there CPS (Child Protective Services) in Cancun? actually I think it's called DIF in Mexico. Sistema Nacional pare el Desarrollo Integral de la Familia. http://dif.sip.gob.mx/
Normally, I am for the family taking care of their kids, but obvousily your neighbors need professional intervention.
You did a good thing,I bet a lot of people saw what was going on but didn't have the cojones to get involved.
You rock!
regards,
Theresa

Can you tell us about Max's birth and what your experience was like giving birth in Mexico as a Canadian? (maybe you already did, can you point me to that post?) I read a post on another mexican expat mama's website and it was really interesting/informative for those of us who may be considering the whole baby thing-a-ma-jig whilst in Mexico.

First off good for you amiga and a long hola to an old friend. ;-)

One day I watched in amazement as one drunken mother berated the lifeguard at the GR Solaris for telling her two under ten children to get out of the red flagged Caribe.

Jonna- We've been very fortunate to avoid the really drunk beaches, where we usually go is actually nice and calm and civilized. We avoid the crowds whenever possible because where there is a crowd, there is beer and fools.

elsueno- I'm going to get myself a cape and become the "Crusading Canuck", off rescuing small children from drunken idiots, lol!

my3ros- I'm with you on the license! Too many people popping out kids that don't know how to care for them.

ale- Sometimes I think jail would be too nice for bad parents, they should suffer what they put their children through. Grrrr, makes me angry!

Fned- Oh if I could go back in time and not meet them! Another friend was roommates with the woman a few years back and she decided she really wanted to be our friend too. She's American, husband is Mexican, they have a baby and voila, she thinks we are just alike! I have managed to NOT give her my cel phone number over the last three years, but she's got Hubby's so he gets stuck sometimes. At least she has stopped just showing up on my doorstep, I stopped answering the bell when she did and she got the hint.

Manolo- Sure, I like a little drama, just wish it didn't have to involve the innocents, you know? Funny you mention Tracy Chapman, for me it the song that rings through my head is "Luka" my Suzanne Vega. Same thing, different singer.

Mexico Way- Double yikes again. And yeah, how sad is it that it is so common? I'm sure it happens everywhere, but not really going to "family " places in Canada (I avoided children, lol), I don't remember witnessing the same behaviour.

Theresa- Yes, DIF is a good organization, but from what I hear they are really overwhelmed and understaffed. If we did report them, they would put the baby in an orphanage most likely, that thought scares me too. I'm really honestly not sure what is worse.

Mexpat- Your request has been added to my list of things to write about. Are you in a hurry, something we should know? Teeheeeeee

Dangers- Oh my dear old friend, how lovely to have you here! A big giant "Shame, shame, double shame" to tourists acting in the same manner. If you come on a "family" vacation, act like a family. If you want to let lose and party, leave the kids with grandma. And dear Dangers, if there were ever a person who would be an excellent blogger, it's YOU, get writing and I will read religiously and spread the gospel according to Dangers.

Oh the soundtrack of a previous life... I youtubed it and here it is the link:

What a GREAT song, if I play it one more time I might bawl my eyes out.

That beach is madness. I ran into some friends from high school in downtown Cancun that were down there selling timeshare and they lived in the apartments across the street. I ended up hanging out with them for about 6 weeks and I spent a lot of time drinking cervezas at that beach. There's definitely a lot of borrachos on that beach.

Wow thats just scary! but sad its the reality of today worlds. You can only do so much! pat yourself on the back, hug max and call it a day!
-h