All weekend long I was thinking about all the great things I was going to blog about Isla Holbox. But those wonderful things will have to wait as I relate our big adventure of a not so great sort. Today just before noon we were wandering down the beach shell hunting. I looked up for a second and saw flames. Big flames coming from a palapa down the beach. Down the beach near our palapa hotel. I took off running and realized very quickly that it was not our hotel, but one not too far away. I grabbed the camera and took off running again. I got to the scene of a flaming mess. Isla Holbox is a tiny little island, no roads to speak of, everyone just scoots down the beach on their golf carts. It also doesn't have a municipal water system, sprinkler systems or......a fire department. People were running out of the hotel with their belongings, chairs, tables and gas tanks. Children were alone crying on the beach. Britfamily wasn't far behind me and BritMama did the good mama thing and got her kids out of there and back towards our hotel. I took a few pics and was just in awe of the power of the flame and the strength of the wind that was pushing the fire towards other palapas and towards town. People inside started screaming for buckets or coolers or anything they could use to gather water from the pool, the only source aside from the ocean. I sprung into action and started hoofing it down the beach, asking everyone for help and containers. At this point Hubby joined in the fray and jumped into the action, running into the hotel in only his bathing suit, no shirt, no shoes, but full service. He had had Max with him but shoved him into my arms and ran into the pit. Max got very upset, wanted to help his daddy put out the fire and I could barely hold onto him so off I ran again to leave him with the Britfamily daughters and son. They took him to their hotel (further away) and set him up with movies and us adults ran back to help some more.

For two and a half hours we and the whole town used toy sand buckets, pots, pans, tea kettles and eventually some bigger containers and some small hoses to put the fire out. There were four whole police officers there and no one in charge. Once the biggest flames died down it was just fighting to stop the smoldering and cinders from flying and to try to prevent the two story structures from collapsing. Kids were in the pool filling the containers with water, passing them to the women who passed to the strongest men who could really toss a tea kettle of water. The bikini brigade to the rescue! It was amazing to watch people do whatever they could to help out, even the crazy men who got up to the second floor and really risked their lives to put out the flames. There were some scary moments when the roofs started to collapse, I saw a beam on fire coming down and SCREAMED as it came within inches of hitting Hubby. If I hadn't screamed, he would have been hit.

Thankfully, no one was hurt. Four buildings were destroyed and probably some vacations ruined. And there will be one little boy who may never smoke a cigarette again. Apparently the whole thing started with a little boy sneaking a cigarette, burning his fingers on it and throwing it out of his hands. I'm sure he feels horrid and I can only imagine how his parents must feel. In talking with some Holboxeños (residents of the island), they were quite upset by the lack of resources or plans in place on the island for an event such as this. I tried to stay positive and pointed out how the whole community came together, but understandably they were concerned about a government that doesn't deem it necessary to provide at the bare minimum a PLAN. Obviously something needs to happen, a plan, a pipeline, a water source and pump or heck, a volunteer fire department. If a stray cinder had gotten free, this fire could have swept down the whole island which is just chock full of dry palapa roofs.

All in all, an interesting adventure today! Max is so proud, he is telling everyone that his daddy is a fireman who helped the police when the building bwoke. Here's some pics of the big event. (Tomorrow or Tuesday I'll get on the dreamy part of our trip, Holbox is a place that we will definitely be returning to).

In the beginning, about five or ten minutes after it started 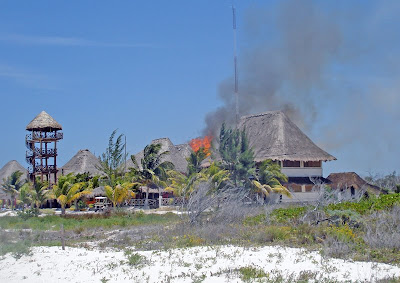 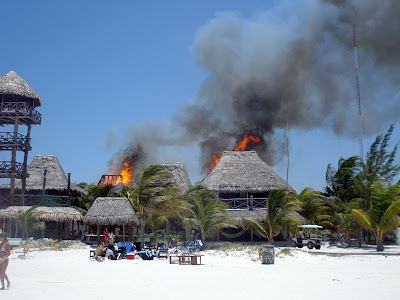 Now that is HOT and FAST 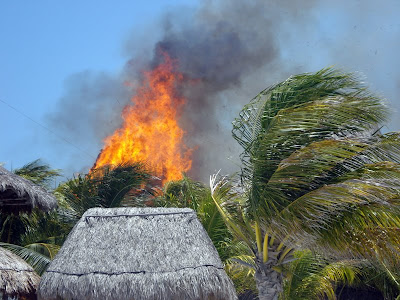 Brave policeman, those burning timbers
were falling and the floor was going to collapse 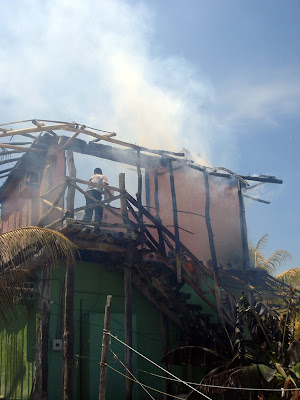 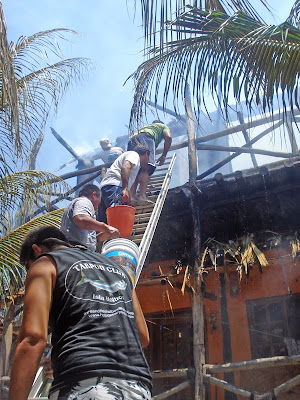 Hubby running in to the burning building! 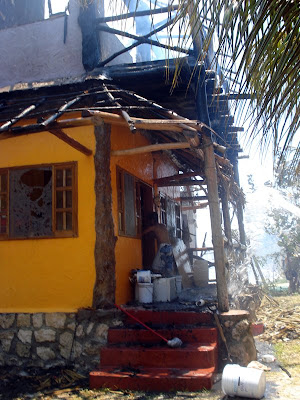 The women and kids really helped out 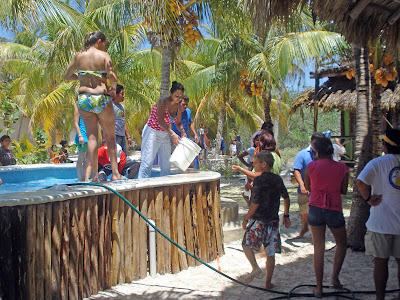 The community and their buckets and pots and pans 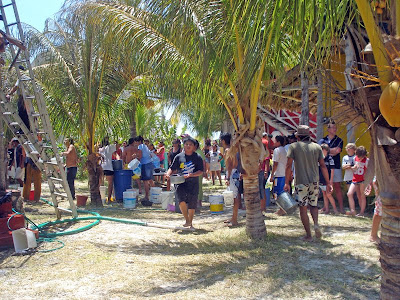 Holy crow! I didn't expect such a dramatic post!!! I'm so glad everyone is ok and that the fire was put out. It really could have been worse if everyone didn't spring into action like that.

This weekend was hot. I don't even want to know how hot it was by the fire. Glad the outcome was a happy one though!

So bad the first thing that came to my mind with this post was that Arrow song: "Feeling hot hot hot"

My heart stopped for you. I am so glad noone was hurt and you are all safe. It is nice to see a community coming together instead of hating on each other. There is still hope for this world.

Holy crap! Glad you're all okay.

Wow... how dramatic!! I got chills reading your post. That's awesome and amazing that everyone got together like that to help put the fire out!!

Sitting on the beach it may seem that the island is 'chock-full' of palapas, but it truly is mostly just the beach hotels. The houses in town are mostly concrete structures with concrete or lamina roofs. That is particularly true since the destruction of Wilma.

Even the beach hotels rebuilt since Wilma are often concrete, such as Villa Flamingos. There are palapa roofs, but the walls and floors are solid concrete block.

I don't see government providing fire trucks anytime soon. The islanders are still waiting on an island doctor and/or ambulance on the mainland.

Wow!!!!! That was quite an adventure!!! Glad to hear that no one was hurt!

Hello everybody, thanks for the story and the pictures. My name is Adriana and I am married to Juan Carlos and we are the owners of the house. God blessed us since nobody got hurt, and he has sent us so many volunteerhelpers!!There was nothing destroyed that cannot be replaced, and the dad of the boy will respond for his son;s actions, so soon the house will be filled with love and harmony and parties with the best people again, thanks to all holboxenos, and tourists for helping to put the fire out. The rebuilding has allready started today, this was nothing compared to Wilma the hurricane, here in Mexico we say anything bad happens so some good can come out of it. Love to all, may God bless you all and thanks for all support, Juan Carlos and Adriana

Is Hubby nuts or what! Brave(?) thing to do with wife and son right there. I have been to Holbox more times than I can shake a stick at. Have not wanted to go since Wilma. Looking forward to updated photos and story.

Mexico Way- It was a dramatic day indeed and holy holy HOT.

Manolo- LOL, that song was going through my head all day. :)

my3ros- I've seen more instances of neighbourly love here than I ever have anywhere else. The community support is great.

Brice- Thanks man. We're sore and tired and have a little cough, but that's nothing compared to what could have happened.

Liz- It was heartwarming to see everyone getting together like that. :)

Anon- Even though a lot of the walls and structures are concrete, it seemed like practically every hotel did have palapa roofs. They go up in a snap and take everything inside with them. I just flipped through all my pics of the island and saw a palapa in almost every one of them. Not saying you are not correct, just that there are more palapas there than in many places, it's just the island nature.

Beth- Truly amazing that no one was hurt, and oh yes, an adventure indeed!

Juan Carlos and Adriana- Thanks so much for stopping by the blog. Your positive attitude is incredible, an inspiration. We wish you all the best, let us know how it all comes out and if we can do anything further from here.

Wayne- Hubby scared the crap out of me, lol! He is the type of guy that jumps in whenever help is needed. I love it and hate it about him, lol! I'll have "happy" pics up tonight, I really fell in love with Holbox in my short time there.

OMG!! How frightening! I'm just glad noone was injured or worse. Bravo to all the folks who pitched in and helped bring the fire under control.

CancunCanuck, you will see in my comment that I did refer to the hotels as having the palapa roofs and those of the houses in town being more of concrete and lamina. Even with palapa roofs, if the walls are concrete, it is much easier to rebuild. Basically, only the roof and furniture have to be replaced, not the entire structure. Many of the 'charming' hotel cabanas have walls made of chicken wire covered with plaster, and they collapse easily under any number of conditions.

the first time i was on isla mujeres there was a fire. we were amazed at how the entire island came out to help. our hotel and all the other businesses took their men and their fire extinguishers to the fire and we have beautifully dramatic pictures of the men on the adjacent roofs passing buckets of water from one to the other and pouring them on the fire to put it out. the fire was contained and extinguished in a very short time with minimal damage to the neighboring buildings. meanwhile all the women were keeping the children away and safe. we were so impressed by the show of community support and amazed that so small a community could accomplish something so remarkable in such a short time. there was a bombero truck but once its water supply was exhausted it couldn't help any further. this was on a monday-our first full day on the island. the building that burned was the restaurant we had breakfast in not 2 hours before. reading your account of the fire on holbox and the fact they have no bomberos shocks me. it also makes me appreciate isla mujeres all the more since they do have all the essential services including firemen and medical assistance yet they are a very tiny island. given its size it's hard to believe holbox doesn't at least have a fire company. do they have police?