All is calm in Kittenlandia right now, Ziggy and Buzz are sleeping on the couch, Max is in time out for pulling tails and I managed to get a couple of ok photos of them to share with you. I feel like the paparazzi trying to get a decent pic, they are constantly on the move and the lighting in the house isn't that great. 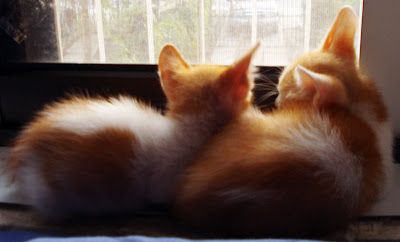 The two babies may look alike, but they are quite different in personality. Ziggy is much smaller than Buzz, but he is the aggressor in the kitty lucha libre! He won't leave poor Buzz alone, always jumping on his back and biting his ears. It forces me to sing "Kibbles and Bits and Bits and Bits" watching this teeny tiny kitten attack his much bigger brother. Buzz is totally chill, he just wants to relax and kick back. Ziggy is very vocal about needing love, he cries til he is snuggled, Buzz really couldn't care less during the day. Buzz does sneak into our bed at night after we are sleeping to cuddle up on our heads. Ziggy is too small to make the jump, thus he must wake us up to let us know that he is lonely and wants to join us on the bed.

Teeny Ziggy on the left, Big Buzz on the right 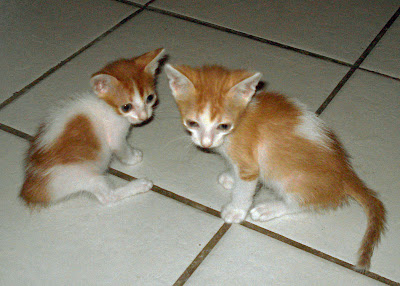 They do love to eat! They're getting Vital Milk and some delicious natural dinners prepared by moi. I'm really torn on the raw diet, it seems for every page that recommends it, there is one that says it's dangerous. I stuck to it for a week, but yesterday I actually cooked their dinner. I think it seems logical to give cats raw meat, it's how they eat in the wild, bones and all. But with their worm situation (which is well under control, their stomachs are far less swollen and no critters have exited any orifices), I decided to cook. This is what I made for them:

Ground chicken, chopped chicken livers (chopped by me, oh blech was that nasty), rice, shredded carrots, a spoonful of canola oil, some cod liver oil, natural unflavoured yogurt and a sprinkle of acidophilus all fried up in a pan and served "dead mouse" temperature.

I know, I know, they sell kitten food in cans but I like the idea that they are getting natural foods prepared with lurve. I think I am trying to ease my guilt about Changa dying, I'm doing everything to make sure these kittens are healthy, happy and loved, and no, they will never go outside. I recognize that even with all the chicken livers in the world that they are not immortal, but a girl can try, can't she? 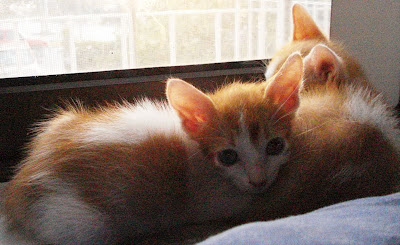 The last photo is my favorite. They sure are lucky little kitties to have you as their new mom.
regards,
Theresa

Thanks ladies, we're all in lurve with the babies and I think they like us too!

While they have grown, they are still tiny! lol!
-h