One of the downsides to living in Mexico is the certainty that at some point you will have some new neighbours, close neighbours, little teeny tiny neighbours living in your intestines. Amoebas and parasites are just part of life here. They build up gradually, sometimes you don't even realize you've got them, starting off with some minimal discomfort, growing into a love affair with the toilet. Most folks living in Cancun eat and drink a LOT of yogurt (blech) or take acidophilus tablets to help promote the growth of the good flora and fauna of the digestive system, but even still they'll getcha, they always getcha in the end (pun intended).
Even taking all the precautions in the world can't prevent these little critters from throwing a party in your pants. You can get them from the water, under-washed fruits and veggies, undercooked meat, bad hygiene, touching someone else who is infected or even just breathing in dust that might have the eggs of the parasites attached.

So, what's a girl to do? De-parasite, that's what! There are several brands of pills and liquids on the market that will destroy the invaders (or so they say). Some are taken over a week, though I prefer the one dose wonders. It's very common practice to take these medications once or twice a year to "clean the pipes" so to speak.

Last year I got kind of lazy about the whole thing and let it go for too long. I actually got used to having the Big D and spending a lot of time in the loo. It started to seem "normal". Until the dizziness and nausea and vomiting started and I ended up in the ER on an IV to replenish the desperately needed fluids. The tests at that point showed that I had amoebas AND salmonella and that they had moved into my kidneys. Yum.

Fast forward to the last month or so of not feeling quite right. At first I attributed everything to stress and the emotional crap in my life manifesting itself into, well, crap. I gave me head a shake and realized that I haven't been taking care of myself and that the parasites had taken over. So off to the local pharmacy where I purchased a couple of doses of Vermox Plus (the "Plus" is for amoebas!). They recommend that if one family member is de-parasiting, that everyone de-parasite so Hubby and I both dosed out last night. Max hasn't been showing any signs and just had a clean fecal test for school so I opted not to give it to him this time. So we should be clean and bug-free soon, yahoo!

I had to share a picture of the Vermox Plus instructions with you, the little cartoon parasites are just too cute! Click on the pic for a larger view of these happy little critters. 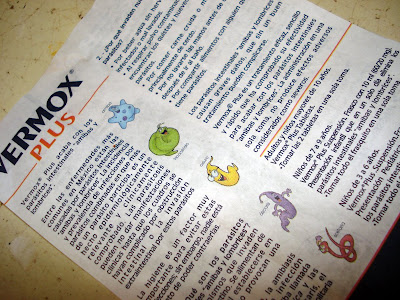 And here is a charming commercial for Vermox, doesn't everyone look so joyful and at home with body bugs? Almost makes the parasites look like friendly playmates instead of the life-suckers they are, I think the little girl is really going to miss them in the end. I on the other hand, will not miss them one microscopic bit.

LoL, ewww, those big old bacterias in that commercial were nasty!!! :)

I have a question, though, and you may or may not know the answer. Does a native Mexican not get infested with such things? Just curious... I'm going to ask DH when he gets home and see what he says. :)

heheh what a tv commercial!!!
The bug problem could be a big one if you don't take care of it :S
We never had parasites because my mom was psycho enough to wash and even bleach all veggies and whatnot and we never drank tab water :S My husband looks at me funny when I suggest to "wash" the lettuce here.. but hey, you never know!
Thanks so much for your comment on my blog, I sent you an email (maybe it is in the spam folder?)
Cheers!

That Max is one smart cookie! How long do you have to study for a fecal test?

hi teacher (i am daniela, last course, remember?)
yes these horrible things suck
and i haven't desparasited(???) yet!!!
i didn't know about fecal test...

Looks like you and I are on the same cycle of parasites. I am in the middle of my treatment right now except I'm taking Daxon. I heard that it kills more of the parasites that you have than the Vermox does. You have to ask for it at the pharmacy. It's about 100 pesos and you take 1 pill every 12 hours and there are 6 pills. PS. DO NOT DRINK WHILE ON DAXON!

elsueño- The bugs affect everyone, foreigner or born here. It's the nature of the climate among other things (like lack of potable water).

ale- I could learn something from you mom, lol. I do take care as best I can, but it's just bound to happen (I do enjoy mis tacos de lechon y carnitas en la calle).

brice- LOL. Yes. I guess I thought they did that everywhere, this is my first time with a kid! I didn't even think that it was just a Mexican thing. Twice a year, if you don't bring in a clean test you are not allowed to enter the school. Sounds good to me, keep the sickies at home!

Scott- We ran drills, I had flash cards, we worked very hard to pass that test. ;-)

Hi Daniela!- Thanks for commenting sweetie, glad to see you here. Now I am wondering if the fecal test is just a preschool thing, you don't have to do it for your high school?

Liz- Hey, we're the parasite twins, haha. Oooh Daxon. I took it last time and I had HORRIBLE nightmares, got really dizzy, bad reaction to it. So it must be good, right? How you feeling? Is the world spinning (more than usual)?

i have never heard about that fecal test so i think it is only on preschool...

Have you heard of Amenox (the US made version is Anfi-something and about 2x the price)? It is prophilatic, one dose every 3 months. Now I'm going to google your stuff. We've been going through non-stop tummy stuff and I've been wondering if it is the cheap water (at the plant vs the Cristal or Electropura at 2x the price)...

We have had confirmed amoebas though and they are NASTY and no question when you have them.

Daniela- Love your new avatar, you're just too cute.

Harvestmoon- I haven't heard of the Amenox brand. I did Daxon last time (see comment of Mexico Way), but the side effects were pretty strong for me. So far so good on the Vermox, no side effects and I am feeling pretty much back to normal, I even noticed a change in my energy level. And oh my goodness yes, amoebas are the worst! A coworker got nailed by them a few weeks ago and ended up hospitalized for over a week, they thought they were going to have to remove his kidney!!

We take Oxal, one pill, one time and you can drink! Seems to work. We treat it like we did the batteries in our smoke detectors NOB. When daylight savings changes, we take our pill, twice a year. Seems to work.

Just got back from Cancun and our driver told us that all Mexican citizens take a parasite pill every 6 months. Every one in the family takes it. It cost very little ($10) for a family of 4. He was shocked that we in the U.S. do not have these worries or take any precautions at home. I had never heard of this either. Interesting...eh?

Dosages are given to kids in Mexico's schools every year. Free of charge.

Hi! Did you say Vermox is available over the counter in Mexico? No doc's scrip needed? Thanks!Got a bad case of these critters and am thinking of traveling to Mexico to get a supply of Vermox in! So awful.