Part two you say? Yes, part two, cause part two of our father's day road trip rocked and it deserves to go first! Part one will come tomorrow, I promise, and you really won't miss the story without it.
When we finished baking in the sun near the rocks of Tulum (oooh, foreshadowing part one), we thought we might like to check out Akumal as we had never been before and were up for some beach time. And hey, wait a minute, we actually know someone in Akumal who might be able to give us a tip on where to find some beach! I whipped out my magical cell phone and called the lovely Mimi of Jonna and Mimi fame. Instead of getting directions to a public beach, we got an invitation to visit them at their private beach, fab-u-lous! Into our trusty Tracker and off down the highway to Akumal we went.

What a beautiful spot, I have total beach-living envy. Jonna and Mimi were more than welcoming and Max was charmed immediately by gifts of cars, parachute men and a Slinky. The dogs were sweet and Tito the Super Macho Cat was toooooo cute. We headed out to their beach and Hubby hit the sea for some snorkeling. He forgot to take the camera out so gee whiz, I just HAD to have a go at it myself. I was glad I brought the underwater casing for the camera, even just steps out from the beach there were fishies and small coral formations. I had been out for maybe five minutes when I almost had a freakin' heart attack. Right in front of me the BIGGEST BARRACUDA I have ever encountered alone. I've swum with others, smaller and in schools but this bad boy was huge and giving me the evil eye. And DUH, I had gone in the water with all my shiny shiny jewelery on, a beginner's mistake and I should have known better, barracude love the shiny things. I flippered back to shore fast fast fast, my heart racing. I did get a quick shot of the cuda, but it didn't really turn out so Hubby went back looking for him. Not only did he get a good shot of him (let's call him Big Moe), but he got the ultimate father's day gift, an encounter with a sea turtle! Mimi had told us they often came in at that time and I was desperately looking for one, but it was Daddy's day so he got the prize.

The clouds were rolling in and Mimi and Jonna had to head off to Merida, so we packed up and headed for home after a great day on the road. They've kindly extended the invitation to visit again and we will most definitely take them up on it.

Jonna, Mimi and Max
(if you look closely you can see a big
goose egg on Max's head from a little
hammock accident) 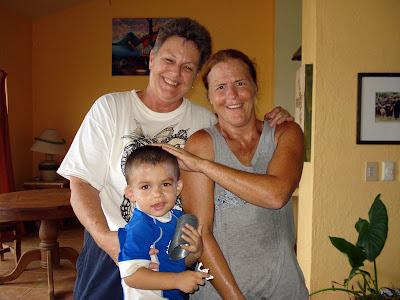 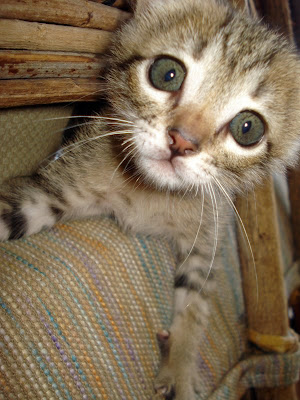 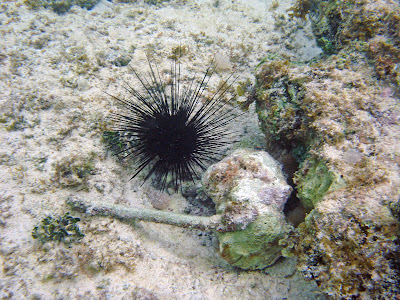 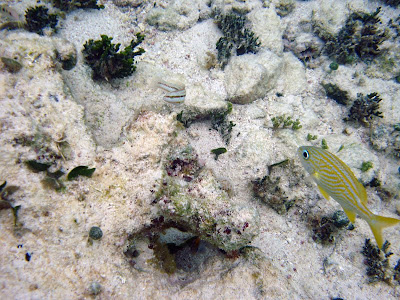 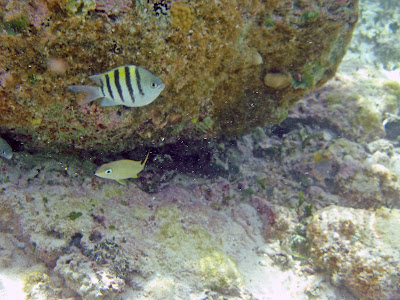 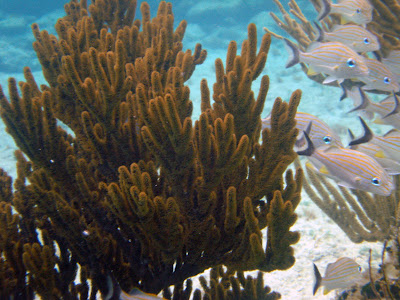 Do I need to title this one?
Ok, fine, Fishies and Coral 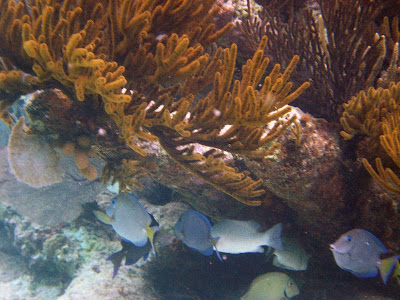 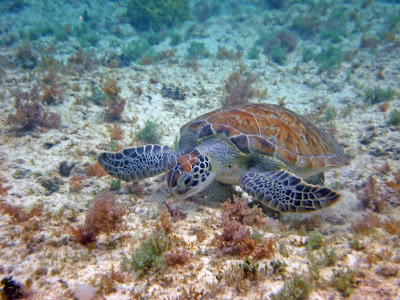 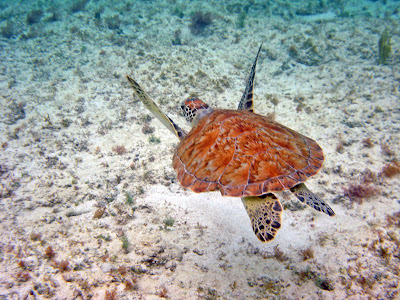 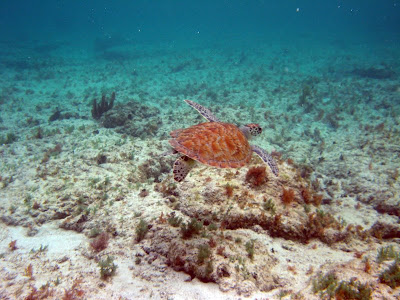 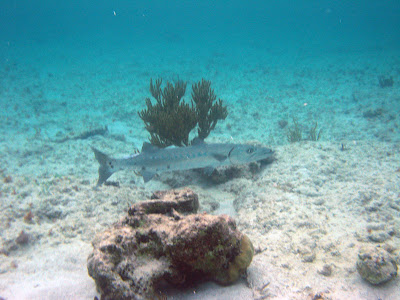 And the ATM? Thanks for the perfect day.

Hey, no giving away part one! Glad you liked your day Papi.

What great underwater pictures. What was the depth of the water in the pictures? Hubby wants an underwater camera, but is still trying to find "the best" one. I think he is holding out for the "most expensive" one.

Trixie- The water was super shallow, to the point where I had to suck in my stomach at times to avoid hitting the coral. I don't have a special camera, it's just my regular digital, but I do have a special casing that is good for up to 10 feet underwater. Great for snorkeling, wouldn't work for diving. I've got a Sony camera and they make a casing especially for my camera, here's what I've got ..... http://www.pccana.com/product_info.php?products_id=241931&ref=1&currency=USD . I think a lot of companies are coming out with sport packs for their digis, check it out if snorkeling is your thing! I did a couple of adjustments in photoshop to clean them up a bit, but I am really happy with how they turned out.

Kelly the pics are beautiful. I scrolled down first to read part one, only to realize it was not there yet. LoL. I am glad you had a great time and that barracuda looks scary.

We had a lot of fun, you guys are welcome to come over anytime and bring The Incredible Max! He is a blast. Mimi still feels bad because he fell off the hammock 'on her watch' and got the egg on his head.

I loved the underwater pictures, your camera did a great job.

Off to see the house, Tito slept all the way over here and then leaped on our heads all night.

I'm jealous! I've seen turtles craling up beaches, I've released babies into the sea, but I've never swum with one! One day...

Great underwater pics .. now I'm waiting for the playa pics. Max is such a cutie.
KW

What a good photographer! Send him to Natgeo...lol

Nice pics! I love Akumal, the turtles are awesome and the beach is so nice and clean there! Sounds like a really nice Dad's Day!

There's no animal on this planet that I love more than Sea Turtles.

What beautiful pics!! I have yet to see a turtle in all our snorkeling expeditions - you are so lucky!! Tito is a little cutie and so is Max - goose egg and all!

If I can ever tear myself away from Isla, Akumal it is!!

My3ros- LOL, sorry for the tease on Part one. The cuda is scary looking and they occasionally attack, but now that I am not in the water with him I think he's pretty cool.

Jonna- Tell Mimi not to feel bad, he's three and a professional faller, lol. He didn't even shed a tear, he's fine! Sorry Tito kept you guys up, lol, he's such a cutie!

Gary- I've had the pleasure of swimming with a few turtles and it really is an incredible experience. You'll just have to take a wee trip down here to do it yourself!

KW- I'm working on getting some playa pics up, blogger is killing me today!

Anon- Hey, you only took half the pics, but yes, good job honey. TQM tambien.

Mexpat- It was a really nice day, we'll be going back to Akumal again for sure for more turtles.

Marque- They are truly incredible creatures, I hope that people continue to respect them and their habitat, they are in danger.

Joanne- I guess you just have to have some more snorkeling trips, oh the sacrifices, lol. Akumal is definitely worth a trip off the island, totally different feeling.

Next time come to our house. We don't have sharks that swim in our bay (did Mimi tell you? I bet she didn't! :)) and our coral is much prettier. Also, you can swim right to the reef. And we'll make sure Max gets NO goose eggs! :)

Oh, and our baracuda is FRIENDLY!

Oh, and we have about 10 nidos on the beach!

Oh, and did I mention the lack of sharks? :)

I heard about this on an episode of Dan Rather Reports on HDNet. Google Video "New Rules of the Game" to see it. I just find it hard to believe that any waste water let alone untreated waste water can be released into the ocean. They have a segment on how the corral have been effected off the coast of Florida and all the reasons and consequences related to it.

LOVE love the turtle pixs! That would be a dream of mine to see a sea turtle in the ocean. seen a lot of seals and dolphins and so on, but no seat turtles in cali, lol!
-h

HarvestMoon- We did see the pics of the shark and talked about it before we went in! Mimi laughed afterwards saying "Oops, forgot to mention the barracuda". We will definitely take you up on your offer of a visit soon, we'll be in touch! Would love to meet your family and I know Max would have a blast.

Marque- It's really unbelievable what is happening, isn't it? That first turtle pic was so sad! Thank you for sharing, it's important information.

Heather- Seal is one I haven't seen,at least not outside of a zoo or aquarium, but I would love to see them in the wild. Swimming with turtles or rays or even sharks in the open sea is an amazing feeling.

Oh and Harvestmoon! Pretty big promise on keeping Max goose-egg-free, he's pretty good at letting them sneak up on you! :)

Hi, Kelly. I am moving to Cancun in a few months and was wondering if there is any sort of community/social club for Canadians living down there? My concern is that my 10 year old meets some friends as he speaks almost no Spanish yet, and he is very fearful.

Hi ChasingaDream,
I know kids tend to worry, but once he starts school he'll have a lot of friends (many kids down here, especially if in a good school, do speak English). There is a Canadian Expat Society and they have meet ups, though I have never been, here's a link http://www.meetup.com/The-Canadian-Expat-Association-Cancun/events/14390545/. Social circles tend to develop through school and work more than anything. There is a great local forum where I have met lots of great friends, good advice there too. www.cancuncare.com/forum, go to the Life in Cancun section. :D Good luck!