The Kid's Got a 'Tude 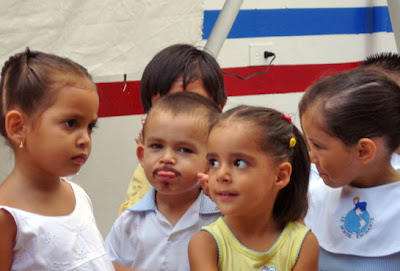 So first, notice the Pancho Villa moustache and beard they painted on him at school. Second, notice his utter disdain for everything going on around him in this photo. Max has an attitude. Max may even have an attitude problem. My best little buddy is doing his utmost to cause a tiny MexiCanadian revolution in the house, attempting to overthrow the powers of Mommy and Papa and become El Jefe de la Casa. He's a stubborn little burro, and he is working his manipulative little campaign of terror with the determination of a bull. He's facing a tough battle against the dictators currently ruling the house, he's done some hard time outs and had to endure some dinners without dessert, but he forges on.

His rallying cries of "Nooooo!" and "I don't want to" and "No quiero" reverberate through the neighbourhood. The snorkel has become his weapon of choice, he wields it with skillful hands and a shout of "Bang bang". Using his devilishly clever mind, he attempts to play mommy and daddy off each other, occasionally succeeding in outwitting them, much to their chagrin.

You've got to give the kid credit, he's got guts. And energy. Lots and lots and lots of energy. His age and vigour just might put him out ahead in the game some days.

But then, between skirmishes, I will hear him laugh uproariously for no reason or see him do a cartwheel or hear him say "I love you mommy" or watch him draw an iguana or feed the kittens or play air guitar or scarf down three big tacos with hot salsa and a liter of jamaica, and then the victory is all mine. Worth every sweaty, weepy, back achy, headachy and occasionally bloody day.
By CancunCanuck - June 05, 2008

Forge on Mami! and remember, when he is 14 you will look back on this time with fondness.

Girl, you better keep this blog going for the next 30 years or so...

Max is so going to love going back and reading all these posts when he's older. ;)

ah, those were the days, my friend! Forge on, he will grow to be a wonderful young man! I say this from experience... my baby will soon be 29, but was very adept at playing me when he was Max's age!

That is the cutest picture!! LoL, I love the look on his face!

"Gee", Wayne said, scratching his head, "I wonder where he gets his 'tude from?" LOL!

Ah, motherhood. Don't worry, it only gets WORSE ;)

Wayne took the words right out of my mouth!!

Your 'tude is still bigger than his- you still have the advantage!! LOL!

fned- Thirty years? Oh man, lol, that sounds like a job or something. He'll either love reading this or be dreadfully embarassed by his stupid mom.

Joanne- Is your child still adept at manipulation at 29? It does get better once they hit 18 right?

elsueno- That is a common look these days. He's lucky he's cute, teehee.

KW- Man, I wish it was easy to let him know, too bad he screams "You not the boss, I THE BOSS, YOU go to time out". Cheeky cheeky monkey.

Michele- Oh gee THANKS, that makes me feel soooo much better, lol.

Lisa- Moi? Yo? Attitude??? No manches cabrona! I'm easy, breezy, beautiful girl, like water off a duck's back. :)

Canucka, my son was a terrorist as a toddler and pre-teen, but no real problem as a teenager. My two daughters were such delightful and easy little ones that I was not prepared for the chaos mi hijo caused. Then the girls became teens, ah caramba! So it's been my experience that boys are harder to deal with as young children and girls are harder as teens. Given my choice I'd pick having the dominace wars while they are still shorter than me.
He is a doll, so cute.
regards,
Theresa

Theresa- Good point on the height advantage, teehee. I appreciate hearing from someone what has been here, thanks! Glad to hear there is a chance that I am not raising demon spawn. ;-)

Oh boy, does that bring back memories!!!!

If it makes you feel better, and as others have said, boys are harder as little ones. My son turned 18 today, and he's been a great kid all the way through. There's been some attitude, and "Mom, you don't understand" moments, but all in all, it's been a breeze. My daughter on the other hand, is going to be the challenge!

Anyway, enjoy all these times with him because before you know it, it'll be him turning 18 and you'll wonder where the time went.

Awh! He is the cutest little guy!

My 20 year old was kicked out of day care at the age of 2 because they said he had a mind of his own.
We thought our 16 year old would go to college with a bottle and diaper bag. We once bribed him with his choice of any toy from Toys R Us, if he would just poop on the toilet instead of in the neighbors sand box. He just looked at us like us like, "why would I take this bribe?" Pooping in the neighbors sand box make you both look bad and it's what I want to do right now." (He now poops in the toilet)
Both have turned out to be law abiding fine young men.
I think boys just have "stronger wills" (or "tudes) at young ages, but hold your ground.
It could be worse. Girls get the "tudes" in their teenage years!!
Love the picture!!

Max is very very cute! Love your blog! I am in cancun for the next month. You should bring Max over for a playdate. I have an almost 3 year old daughter. We have a condo right next to Cancun RIU and the public beach access. I will have a frio cervesa waiting.....
email for my # if you want.
charmelle68@yahoo.com

Beth- Thanks for the encouragement, I really do feel better hearing from mom's with boys that turned out ok! Good luck with your daughter. :)

Trixie- LOL, once again, thanks for sharing your experience. All you moms are making me feel better and giving me a good giggle.

Diana- Hola! Nice to "meet" you. I'll send you an email and maybe we can hook up a play date, sounds great.

Heather- Oooh, saying "no" has become a full time job! It is harder when he is putting on a really cute face, much easier when he is just melting down like a gremlin.

That Kelly, is YOUR face during one of many boring dance history 101 lectures! ;)

Christine- LMAO, ok, I've been busted by an old friend, teehee. I guess maybe I might have influenced him just a tiny bit. :)

If you would like to set up a play date that would be great! We are here for two more weeks then come again in October. I have the time...just hanging out with the kiddies. our # 998-883-5161 or charmelle68@yahoo.com.
no pressure but i think it would fun! enjoying every minute of beautiful Cancun! diana