The last few days have been pretty heavy in my blogosphere, writing about a tragedy has taken its toll on me, I've spent so much time reading news, forums and answering emails that my brain hurts. Hubby and others have mentioned they are concerned for me with the attention on the blog, especially after reading a report linking the governor of Quintana Roo and my blog in an article about fighting bad publicity for Cancun. Hubby also heard my blog mentioned a few times on the radio today. I won't stop writing about the sinking of the Sea Star, but will only post when something ground breaking comes to light. For now, with all due respect to the people involved in the Sea Star, I am going to move on to something a bit less serious. If you are looking for stories on the sinking of the ship, scroll down or look to the left bar for previous posts.

And now a walk on the lighter side with kittens! Buzz and Ziggy are growing like weeds, causing havoc, learning how to climb the stairs (clumsily) and how to climb the bamboo curtains (with great skill). They are very healthy now, no more worms, just an occasional flea and they really do have some lovely soft fur. I'm still making all their food, I swear they eat better than we do. I am cooking their food, but at the vets recommendation they get a raw meal once or twice a week, he says it is the best way for them to get essential taurine. They do love Max, though when he is at full steam, they are in hiding. When he settles down, they love to snuggle up to him and purr, he thinks that is da bomb. They are developing a bad habit of attacking feet in the night, Hubby can't take it and heads downstairs to sleep. Doesn't bother me too much, they're my babies after all, they're just wittle. 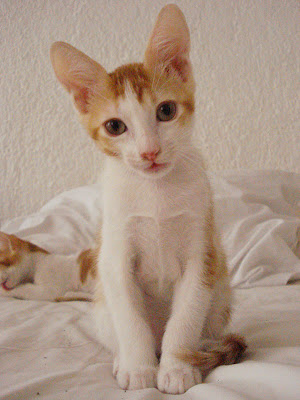 Buzz in front, Ziggy chillaxing in back 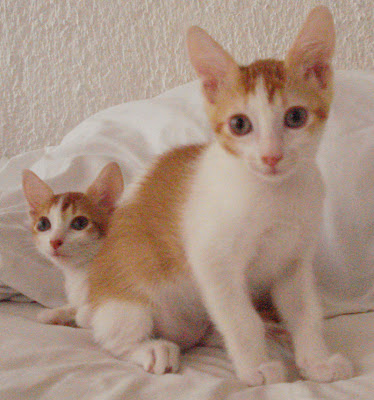 Once again Ziggy is the lazy one in back,
Buzz the curious one up front 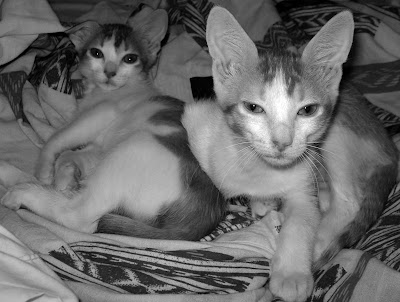 Is that an optical illusion or is Buzz twice the size of Ziggy? I made cat food for awhile,the only thing that I remember about it is drying egg shells in the oven and then crushing them for calcium and adding cat vitamins for the taurine. I don't even remember what taurine is but the name stuck in my head 'cuz it sounds like taurus.
regards,
Theresa

Glad to see a kitty update, was wondering how they were!

I was getting a little concerned about you too - especially after reading one article - it kept quoting your site over and over and over.

Glad to see a kitty report too. I SO wish we didn't have allergies.

CC, I've been meaning to comment on how wonderful you are for the posts on this tragedy. Can you imagine your child, newly graduated from high school and off on their own, perhaps for the first time, in a foreign country and something like this happens? Terrifying. I think your compiling information and doing some translating for them was wonderful but just as important was having you as someone they could relate to, that they felt comfortable with, and that was comfortable in the culture and was here. As an American, I just want to thank you for doing this for these parents. As for the Mexican reaction, it's always a little scary to be noticed by the powerful ones. You've been here before and I think you have the guts and the honor and the light touch to pull it off.

Oh, and the kitteh's are gorgeous and they still have those huge ears. I think that is a breed trait, like those Egyptian cats?

Oh. My. God. They are just the SWEETEST little angels!! They're getting so big, and those EARS!! I love me my kitties with big ears!! Cover them in kisses for me, will ya Kelly? Thanks so much for the kitty fix!

It will be interesting to see how this Sea Star thing shakes out. I feel your discomfort with the attention. Remember the stories that I can't tell anymore?! We had two of them this week and I can't even mention it. The kitties. I agree with Jonna. Must be a little Egyptian or maybe Abyssinian in there somewhere. Sure are cute little things.

So CUTE .. love them. Glad you are changing gears. I've read the papers and don't like seeing your blog out there. Be safe ..
KW from Michigan

OMG they are so cute Kelly. Be careful I always worry about you. Stay safe.

Yep the kitties look great, and you be careful. See you next Feb. with the crackers.

Ditto Jonna. Thanks for all that you do. The kitties update is a much needed post!

Argh, I swear I replied to these comments, so sorry everyone, apparently it didn't stick!

Theresa- Yes, Ziggy is half the size of Buzz physically, but he dominates him in every other way! Buzz may have the size, but Ziggy eats first while Buzz waits, he's such a bully!

Heather- All's good in the hood mama, thanks for checking in!

Harvestmoon- Awww, sorry to hear about the allergies, I think after all these years as a cat lover I would suffer through them if they ever developed, I really don't think I could live without my feline friends.

Jonna- Bless you sweetie, you're so kind and lovely. Hmmm, Egyptian huh? Well, maybe somewhere way back in their ancestry, teehee.

Joanne- Kisses have been delivered, more on the horizon for sure.

Wayne- I do remember the thing we can't mention (haha) and it came to mind this week. I am curious to see how the Sea Star thing plays out as well. Right now I am keeping it to emails of the people who ask for info, though I will blog it if something definite happens.

KW- Hola amiga! I am staying safe, playing it cool, laying low, don't worry about me! :)

My3Ros- Thanks for the concern mami, we're all good here!

Tom- My mouth watered reading your comment, some sort of Pavlovian response I think, lol!

Kelly- Thanks for the support, I figured everyone needed something light and fluffy after the tragedy of this past week. Can't get much lighter and fluffier than kittens. :)