The Most Beautiful Flag in the World 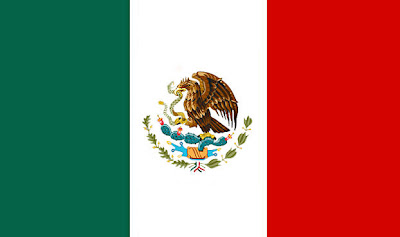 An online poll to determine the most beautiful national flag in the world has ended with Mexico as the winner by a large margin over Peru. The Spanish website "20minutos" reports having over 7 million votes throughout the contest which included flags from 104 different countries. Mexico garnered 901 627 points, with second place Peru earning 340 901 and third place Guatemala 272 541.

The Mexican flag is not only beautiful to behold, but it has a lovely sense of symbolism and history. The green stripe is said by some to represent the hope of the independence movement, white is for purity and peace and red for bravery, valour and for the blood of the national heroes who defended their land against Spain. According to legend, the Aztec people were told they should establish their city in the place they found the "caracara" holding a snake in its mouth, perched on a cactus and thus the central design element of the flag captures this piece of mythology/history. The flag was created in 1821 after the battle for independence was won, though the current version was approved on September 16, 1968. "Dia de la Bandera" or "Flag Day" is celebrated across Mexico on February 24th.

I love the HUGE flag on the hotel zone. Glad to hear Mexico won.
KW

And I just thought it was pretty because I love Mexico so much! Turns out everyone likes it!

KW- I love that flag too, I wish they didn't take it down so often, I guess it's hard to keep it intact in the salty windy air.

Mexpat- They liked it, they really liked it, lol! I think it's a beauty myself.

I love the Mexican flag -- the feathered serpent (Quetzalcoatl) represented in the middle is symbolic throughout Mexico (for Aztecs and Mayans). I was visiting Chichen Itza a couple months ago and it was so amazing to see how the Maya depicted Quetzalcoatl.

Mexico is a country with such a rich cultural heritage, so I am glad that the Mexican flag won. I don't think I could ever get bored discovering all of Mexico, as there is so much to see and explore.

Jeff- Thanks for jumping in and welcome! Mexico truly is an amazing and diverse place, I can only dream of discovering all it has to offer.

Could you mention until 4th place???? :p

I have always loved the meaning and design. My grandma always had a big religious pix with the the bird and snake in it, so to see it on the flag always meant to so much. But i love brasil's flag too with its words on it. anyways congrats!!
ps- sorry anelys, lol!
-h

NO DOUBT,THIS IS THE MOST BEAUTIFUL FLAG IN THE WHOLE WORLD.sooooooooo BEAUTIFUL

I was a bit surprised the Union Flag didn't make it, even if it was a Latin based poll! Everywhere I look in the DF and elsewhere in Latin America someone is wearing it - it seems to be a fashion statement. My Mexican family keep buying me clothes with it on - whether to remind me of home, or as a 'Return to sender' type thing, I don't know!!!

Why is the Union Flag used so much do you think? The only thing I can come up with is music - Brit pop and rock is incredibly popular.

*Disclaimer! I am from the UK, but I'm not harping on about my flag as a patriot! I'm just curious...

Heather- I love that you have the family moment in your mind when you see the flag, that's lovely! Brazil's flag is great, always makes me think of a party, lol!

Anon- I agree, thanks for stopping by!

Gary- Interesting question! I am leaning towards the pop culture theory, Brit bands are super popular (and always have been really, I see folks here with Sex Pistols t-shirts and wonder if they really have any idea what they are wearing, teehee).

they couldn't of chose better this is the most beautiful flag in the world no doubt about it!!!

EVERY NATİON'S FLAG İS BEATİFUL. CONTESTS CAN'T DESİGNATE THE MOST BEATİFUL FLAG. THİS İS A FAULT. ı think the most beatiful flag is Turkish flag. if you want take a look.

Anon- You've contradicted yourself, first saying there is no "most beautiful flag", then naming Turkey's flag as the most beautiful. Yes, it's a beautiful flag and there are many, I think the contest was all in fun, don't take things such as this too seriously.

Indeed is one of the best looking flags out there.


Someone posted something about how often do they take the flag down.

Well I don't know if its some sort of rule/law but the Flag[at least the Mexican one] has something similar to "work hours". It's lifted up early in the morning[6am] and pulled down 12 hours later[6pm].

Remember the Mexican flag is almost sacred for us Mexicans. It's against the law to have a mexican flag on your shirt for example unless you're with the military, law enforcement or a government agency.

Mauricio- I can never understand the ups and downs of the hotel zone gigante flag, some days it's there, other days it's not, I think that's what the question was about. I know there is a law about the flag, but it doesn't seem to be followed much, saw a guy yesterday with a uniform on for a marina, nice big Mexican flag patch on his arm (no, wasn't coast guard or anything official). Love the flag, thanks for stopping by!

It is just an Itilian flag with a crest in the center. I'm not from Peru, but I think it is more beautiful. Ballanced and proportioned with colors, shape, and design.

Correction in English: The flag we know was used by the "Ejército trigarante" (Three Warranties Army) who won the independence revolution by signing the "Plan de Iguala" after the mythical hug in Acatempan. Each warranty the army fought for is represented by a color: Green for independence (freedom and hope); White for religion (purity); Red for unity (in opositon of the existing social division by skin color imposed by the absolutist monarchy). Nice blog, cheers!

It is the "Plan the Iguala" signature what we really celebrate on February 24th. ;)

I think guatemala flag should've won because its beautiful colors that represent liberty and willingness of the people to fight for their country and also the quetzal a beautiful bird so colorful and it long tail... Just saying..