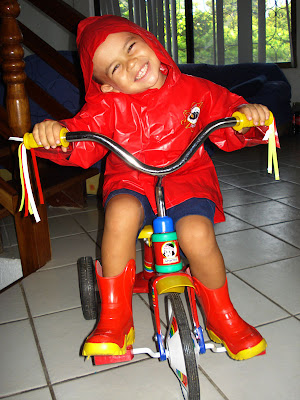 I've been tagged by Momto3Flowers in a meme about Max! So, here's Seven Facts About Max that you may or may not know.
1. Max is an Aries child, his birthday is on April 12th. Before he was born I checked out some baby horoscopes and was terrified to read that he would be "the Rambo of the play group". Well, so far no steroids or machine guns, but he is rambunctious and definitely a leader!

2. Max is obsessed with superheroes. Superman, Spiderman, Sportacus, you name a hero and he will pretend to be that hero. Our pretend games and made up story times are all about saving someone who is in trouble. He flies around in his Superman cape calling me "Lois", rescuing kitties stuck in trees or kids who fell down holes. He can go full days without calling me "Mommy", I am "Lois", "Lady in trouble" or "Stephanie" (from Lazytown), but not "Mommy". Superhoroes are closely followed by policemen and firemen, his tricycle doubles as his fire truck.

3. He's a real softie. If he sees or hears another child crying, he wants to help them. He'll approach a crying child and stroke their head saying "No llores bebe, no llores" ("Don't cry baby, don't cry"). If he can't see the child or get close to them he'll say "Why's he crying? He wants his mommy, where's his mommy? Can you find her?" I love my little sentimental fool. I wish he would stop asking for a little brother though.

4. His current conversation game involves asking me what something is, then asking if he can eat it. He'll ask "What is it mommy?" even if he knows what it is, because he needs to get to his "Can I eat it?" punchline. For example, "What is it mommy?". "It's a garbage can Max, you know that". "Can I eat it?" he says with a gigantic smile. "Guacala Max! Yucky, no you can't eat it!". Followed by hysterical laughter rolling on the floor. Fun.

5. He is sooooooooooooo excited to be starting "Kinder Uno" (Kinder One) at his school. He knows that the Kinder kids are the big kids and he is really proud. When I ask him who is going to go to Kinder Uno, he says "ME!", with his chest puffed out and a huge smile, he's very proud of himself. He loves his school, getting him to leave is more of a challenge than dropping him off, he doesn't want to come home!

6. He has a great arm for baseball! Who knew? Neither Hubby nor I are very "sporty" and I really don't have any great expectations of an athlete in Max, but a few weeks ago we got a cheap plastic bat and ball set and the kid is whacking them out of the park! He's got a pretty good pitching arm too. As an "artsy fartsy" girl, I would prefer that he embrace dance or theater or visual arts, but if he's got some natural talent at sport, who am I to scoff?

7. The kid's got a temper. He's normally a nice, polite little boy, but when he's mad, boy is he mad! That's certainly something he got from his Daddy, Mommy is cool as a cucumber. When Max is mad, the first scream is "I'm not going to talk to YOU". Followed by "You're not my friend!" and "Don't look at me!". These simple phrases are the preamble to "AAAAAAAAAAAAAAAAAAAHHHHHHHHHH NOOOOOOOOOOOOOOOOOOOO" and a return to the cycle of "I'm not going to talk to you", but in a screaming, high pitched tone. It's never the highlight of the day, nevertheless, he's still cute as a button, even if it is a red-faced, loud-mouthed button.

So, there you are, seven random things about my crazy three year old. I'm not going to "officially" tag anyone, but if you are a parent and want to share, I'd love it if you would play!

Oh, Max is so cute, I could just smush him! (gives Max a big ol' grandma hug)
That sweet,"softie" part of him is what reminds me so much of my grandson (MDBB) when he was that age. They can just melt your heart.

I'm an Aries too. Maybe he'll just end up a latino manslut?

Max is what he is .. and he is such a cutie!! Can't help but love that face.
KW from Michigan

I have gone through raising two boys. One, my artist, was kicked out of daycare at 2 years old for being too independent. He has turned out just fine. Max is a real cutie. Bet he even looks cute when he's throwing a tantrum!! I may have to do a tag blog about both my boys. They have many similarities, but many differences. I am so thankful they have turned out to be very close as ages 16 and 20.

I love that picture of him in red on his trike. He's such a handsome kid, in pictures and in person. He's going to be heartbreaker, I think that part is true. My son is also an Aries, April 16th, and he is athletic and confident but he still has that sentimental side that I loved when he was a kid. I think Max will always have empathy for others, that's a wonderful trait.

Sandye- Hugs have been passed along, thanks! They are amazing at this age, aren't they? He does melt my heart, I just worry about the day when he breaks it. :)

Brice- "Latino Manslut", isn't that just redundant? Ha, just kidding of course. Well, sort of. If Max turns out anything like you, I will be the happiest mama in the world.

KW- Thanks, he's lucky he's cute cause he sure is a handful!

Trixie- I would love if you would take the tag, drop a comment if you do! (You're on my reader so I will see it anyway, but others may want to check it out). Glad to hear your independent one turned out ok, I am not too too worried about Maxito, but I tell you, he can really push the buttons! The worst is when he is doing something naughty that should make us mad, but all we want to do is laugh. If he sees us laughing, he'll do it ten more times, we hide our faces behind our hands a lot as we say "No Max, that's bad!". :)

Fned- Thanks amiga! When are you going to produce offspring? (Don't you just HATE that question?) :)

Jonna- Thanks, I love hearing from experienced mommies, and if Max turns out as well as your son, I have nothing to worry about. He says "Hi", lol, when he hears your names (you and Mimi of course), he asks when he can give you chips again, HA!

Yesterday my daughter told me that not one but two of her friends dreamed about her having a baby. Shheesh! They just got married a few weeks ago. Tara has a middle name picked out that would work for either boy or a girl. It’s Aaron/Erin after Elvis Presley.
Anyway I cannot wait to have a little person around again. They say and do the darndest things. It is hard as an adult not to laugh at a little one when they are being bad or just plain nasty. Especially if it is someone else’s child.
Max is so cute in that raincoat on his trike. Of course his trike is his fire truck. What else would it be?

Jackie- Or should I say "Grandma"? Aaron/Erin/Aron (as it's spelled on the King's grave) is a great middle name, boy or girl! I really can't believe how much I am enjoying Max even in his bad moments, this whole parenting thing is incredible, what a trip! Oh, the "fire truck" is occasionally a police car or a pizza delivery motorcycle too, lol!

My boys are still playing super heroes at 6 and 8!

He's so adorable!! I can't imagine that sweet face having a temper! Love the red slicker and matching boots - looks like a super hero to me!

when my granson was Max's age, i gave him a native american name
NOISE, WITH DIRT ON IT
need i say any more:-))

I'm not sure I can do 7 things about aach one of mine, but maybe I can 4 about each one. I'll try anyway...

Great to read 7 facts about him... He is just a fun little boy full of energy and it gives me the impression that he will have a huge passion for life and for being succesful.... You guys are doing a great job!!!