I've had a lot of ex-pat friends traveling "home" lately, going back to the States or Canada or England for a vacation or a visit and it got me thinking. I have only been back to Canada once since arriving in Mexico in 2003. I don't feel the urge, I don't get homesick, there's not much that I miss. My family comes here, for them it's a treat to come to the beach and to visit/spoil Max so I actually see them almost as much as I did when I lived in Toronto and they were in Windsor. Sooo, why go back??
In pondering my lack of return visits, it got me thinking about the one visit I did make in December 2004. I was six months pregnant and really wanted to show my folks my expanding belly. Hubby wasn't able to get time off work so I was traveling by myself. Well, I guess I wasn't really alone, Max was kicking up a storm inside but he was no help at all with the luggage. The flights were booked and off I went to the airport for a quick five day trip, coming back in time to spend Christmas with Hubby. I had a connecting flight in Miami, then to Detroit then driving over the border to Windsor. I was excited to see the family but sad that Hubby couldn't come with me.

I knew that my connection was tight, but the airline insisted that I would have enough time to get through immigration then board the flight to Detroit. Well, I should have had enough time, but leaving Cancun was delayed (big surprise). Flying while six months pregnant was no joy, I had to get up to pee a million times, irritating the heck out of everyone, myself included. We landed in Miami and I hoofed it to the immigration line. And encountered a sea of humanity, there must have been a thousand people there from every country in the world. I waited and waited and waited and waited and crossed and uncrossed my legs in my desperate need to pee again but I was NOT going to give up my spot in that line to find a bathroom. I finally made it to the immigration agent, put on a happy face and hoped he wouldn't give me a hard time. I got through immigration ten minutes before my next plane was scheduled to depart and took off running.

Yes, running with a big ass belly and my carry-on and my purse, flying through the airport like a pregnant OJ Simpson. Huffing and puffing and really needing to pee, suddenly my stomach clenched and cramped and I realized I was having contractions. But I kept on running. I got to the gate, only to see the plane pulling away. I collapsed on the floor and started to cry. A kind airline employee came over and helped me up and asked if I was ok. When I said I was pregnant and having contractions, they got me a wheelchair and a bottle of water and helped me to calm down. I was so upset at missing the flight, it was the last one of the day and there was no chance I was going to make it home. The airline set me up in a hotel room for the night, with complimentary dinner and breakfast and rescheduled my ticket for the next day. I managed to contact my family and let them know what happened, thank goodness they hadn't left for the airport already. They told me that my cousin had been going to surprise me at the airport, but alas, I didn't get to see him that trip as he was traveling himself the next day.

I managed to get off early the next morning with no troubles and no more contractions and an aisle seat close to the bathrooms on the plane. (Normally not an ideal seat, but for a woman with a child sitting on her bladder, it was a gift). I remember quite clearly the SHOCKING SLAP IN THE FACE of winter when I walked out of the Detroit airport, it literally took my breath away. The time in Windsor with the family went too fast but it was lovely to get to see them and to show off my belly bump and ultrasound photos and to shop for some decent maternity clothes.

So you would think that coming back would be easy? Ummmm, NOPE. But that's a story for another time..... 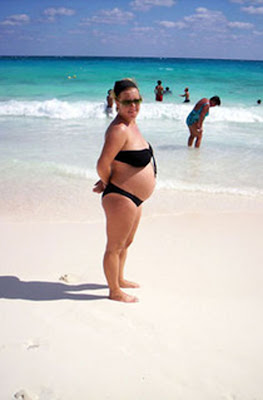 I tell ya, Canuck! I just love reading your posts. They're always like a quick adventure!

You're friend in LA.

The next time I miss a flight, I'm going to lie on the floor and start crying too, saying "I'm just an old man. Help me!" All I've ever gotten for a missed flight is a seat in the waiting room! BTW, I would never have thought that was you in the photo.

What an experience, glad it all worked out to your advantage.
Cute pic .. I see women at the beach looking like that in a two piece and they aren't even preggy.
KW from Michigan

That's a sexy pic.
And you're not kidding about the WinterShock. Coming back after my honeymoon, we went through a 60 degree temperature drop between Costa Rica and Ontario! It hurts.
Don't try it now, after so long away.

I finally had to bookmark your blog. I was finding myself reading it every day! Love your adventures and photos. Makes me miss Mexico more each day.
I know how bad a feeling it is to be racing through an airport only to miss a flight, but I can only imagine being preggers and trying to do it.
Can you spell S-T-R-E-S-S?
Keep up the ever awesome writings!

As an ex-pat who (1)did the trip backwards than you and (2) just came back from the motherland where it rains cats and dogs these days I appreciated your post. As a friend keeps telling me, "coming back is hard, but it has to be done" I guess your approach is more like "let the mountain come to me".
What an adventure, I will never fly pregnant! (well, actually I can't ;-) )

When I was pregnant I don't think they made 2 pieces in the maternity section. Everything had bows, stretch panels and ruffles!! That was over 16 years ago!!

What a trip. You made me feel a bit better about not visiting Canada enough. :)

John- Thanks, hope life is grand and the earth ain't quakin' in L.A.. No worries on the grammar, lol.

Gringo- I think everyone should throw a good tantrum in the airport now and again, teehee. I must have looked realllllly pathetic for them to fork it all over.

KW- I love seeing belly bumps in bikinis, but you've got to be careful who you congratulate, as you say some have the belly without the baby. The next part of this story is about immigration in Detroit, boy that was fun. ;-)

Brice- Thanks sunshine! Those big temperature drops are part of the reason I stayed here, I'd just rather not have the shock to the system. I won't be doing it anytime soon on purpose. It will be bad enough if we go to Puebla for Christmas, it's downright chilly there at 50 F/10 C!

Cdn Cat- Well, I'm glad you bookmarked, welcome aboard! I was pretty stressed, I wouldn't recommend it, lol. Thanks for the kind words!

Manolo- I guess you do have to go back, I know I will one day but it's just not a priority. Sorry bout the rain you got, hopefully the family brought some sunshine to your days. (Sappy huh?) :)

Trixie- I'll confess, the top is a tank top and those are just big bottoms (and so was mine). The tank top used to cover my belly but uh, er, it became more like a bra very quickly. I hated maternity clothes, I'm so not a "bunnies and bears" kind of girl and so many outfits were just too damned cutesy for my tastes. So, tank tops and loose cotton pants were it!

Tacogirl- Life is good down our way, why go back? The internet allows us to stay close to the family and in my case at least they come to visit, so all is good in the hood!

Girl that happens to me every few months, lol, jk!
-h