Our trip to the beach today has been delayed and delayed. We were heading out when we realized we had a flat tire. We started off to get the tire fixed when we saw HUGE plumes of smoke so of course, being the roving reporter/chismosa that I am, we went to see what was burning. The Mega Comercial Mexicana (a large grocery store) had piles of black smoke pouring out. As we were driving past we saw more and more firemen, police and ambulances arriving. My heart goes out to the brave folks fighting this fire, it's a bad one. Hubby just said the radio announced a complete loss of the store and that people in the area should close their windows as the air is very toxic. Here's some photos, hot off the press. 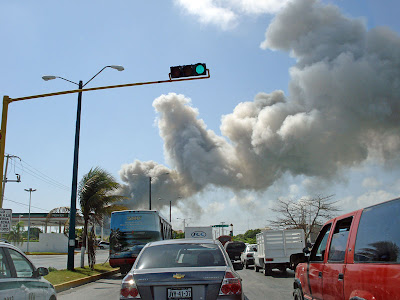 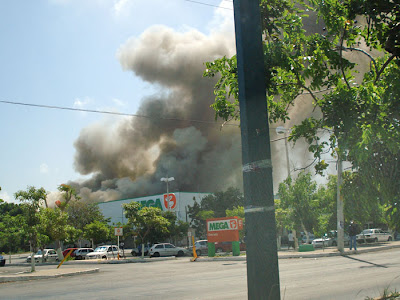 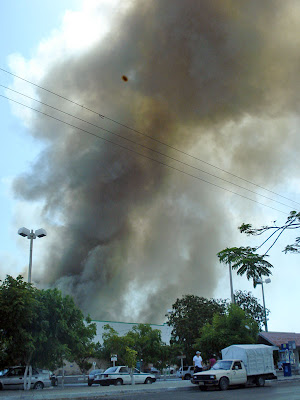 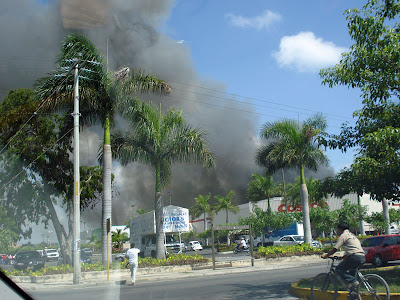 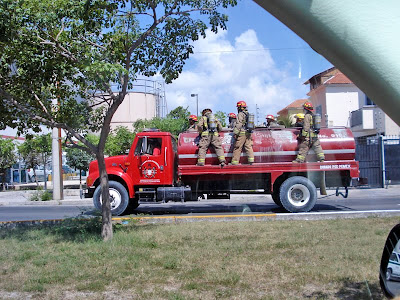 Edited to add: More pics and the story in Spanish from Noticaribe here

Holy cow! I spent every day of my last three months in Cancun at that store. And I do mean EVERY DAY.

Good karma-thoughts to the firemen fighting it ~

I have an apartment beside cosco and woke up with the sirens, looked out my window and saw the huge black column on smoke. We have it on video and waiting for them to upload, it takes ages! We've already walked down there and all the employees from la Mega were there, sitting outside, eating a snack. Fortunally no one got hurt, and the fire is completely gone now. Thankfully my house was on the opposite side of cosco and the smoke didnt get to us, or else we've been out of here sooooo long ago heheh.

Wow, you were there almost as soon as it started. The smoke seemed to go on for a couple of hours and I'm sure was very toxic too, as you said. It looked very bad even from the Chedraui parking lot across from Soriana. At least no one was hurt and it didn't spread to CostCo or anywhere else. Good pics.

Wow, fire just is the last thing I even think about here in the land of cement and limestone. How did it happen? How frightening.
regards,
Theresa

We were on our way out of Paseo Cancun when the fire started and drove past it before the fire trucks got there. The back ob Mega was really going up in flames. We went out to the hotel zone to have breakfast with friends and you could see the smoke from the Avalon Grand. When we went back to the Costco area after, the police had the streets blocked and fire trucks from Playa del Carmen were pulling up to assist. What a shame, Mega is my favorite store. Tom

JJ- Every day? I guess it's cheaper than running the AC, haha! And I am sure your bitterness had nothing to do with this fire. Well, pretty sure. :)

Arianne- Thanks for jumping in, glad to hear that all is well on your side of the street. The radio was saying that people should be careful breathing (oh sure, sounds easy!) as the air was toxic. Hope you are breathing easy tonight!

Jennifer- We could see the smoke from Isla Blanca (when we finally got there), it was a doozy. We listened to the radio on our way out, there was a lot of concern for the firemen and for the toxic air. As I said to Arianne, thanks for commenting and sharing and I hope you too are breathing well tonight!

Theresa- No word on how it started, just glad that no fire fighters or emergency crews were hurt. This is not the first fire in a commercial area, the Comercial Mexicana downtown had a big fire less than a year ago, as did the big mall, Plaza las Americas. Sadly, there were deaths in the mall fire, at least one fire fighter lost his life in that one. You can see by the last pic that bomberos are hardly state of the art here, look at that old truck! I am quite relieved that none of them were hurt today.

Tom- I think you guys live pretty close to there, glad to know you got out of the downtown area and got some fresh hotel zone air! Thanks for jumping in!

Wow! I hope all was well with the bomberos.

When you guys coming down south?

I don't get it. A year ago the other one went up in flames. I smell something fishy.

So glad there were no injuries. I liked shopping a Mega and so glad it didn't spread to Costco. I agree that something smells fishy.
KW from Michigan

Harvestmoon- No one was hurt, all the firefighters are ok, thank the goddess. And yes, pinche llanta, flat for no reason according to the tire guy! I missed your invite to go down south (and can't find your email address), but yes, we must get down that way soon! Not sure if we can do it this weekend, will let you know.

Mexico Way- Awww, the conspiracy theorist, LOVE IT, thanks! I think Comercial Mexicana just has some bad voodoo or karma, I don't think these were deliberate. But I like your style!

KW- I'm sure Costco is pretty smelly and may have some smoke damage, the stores are right on top of each other. Mega will rebuild, hopefully bigger and better (and smarter and faster?). Not sure if there is anything fishy with this or not, there is no indication of arson as far as I have read.

OMG! Is this the Mega next to CostCo?

yikes! guess the beach wasnt meant to be that day.
-h

IslaGringo- Yep, it's the one that used to be next to Costco. Today's news says that the building needs to be demolished. There are a lot of videos of the fire on youtube if you want to see some shaky cel phone camera action, it's quite impressive actually. Guess you'll be heading to Soriana next time!

Heather- Hey, who said a flat tire and a devastating fire could get in the way of our beach day!? We made it out there, just a little later than expected. :)