Famed tenor Placido Domingo is set to perform a concert at Chichen Itza on October 4th of this year. He will be performing with the Yucatan Symphony Orchestra in a show entitled "The Concert of the Thousand Columns". Señor Domingo will be premiering a composition by Mexican composer Ramon Inclan, "Chichen, Chichen Itza" which was written after Chichen Itza was named one of the New Seven Wonders of the World.

According to some reports, the concert received criticism as federal law prohibits activities that generate a profit on historical sites such as Chichen Itza. INAH, the government agency for the protection of historical areas expressed concerns to the federal government of Mexico about possible damages to the famed archeological site, asking that the concert be denied permission to move ahead. Their concerns were dismissed and the concert will proceed as planned. Ten thousand tickets will be sold through Ticketmaster, the cheapest being 500 pesos, most expensive 10 000 pesos.

I was really interested in checking this concert out, Hubby's birthday is September 29th and I thought it would be something special for a celebration. Unfortunately, those prices are waaaaaay out of our budget, I am not about to fork over 1000 pesos to sit in the back row that should probably be reserved for mosquitoes! If this were a concert for charity, I may not be quite as aghast at the prices, especially since it is supposed to be a celebration of Chichen Itza and its inclusion in the New Seven Wonders. It would be lovely to think that at least a portion of the proceeds would go to support further protection of the site or exploration of "new" ruins, but it looks like it is purely a for profit venture. Too bad, I think it would be an incredible event. If money was no object I would be there in a flash just for the experience (an ancient operatic Woodstock?). 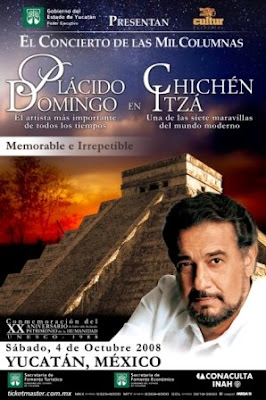 I've been seeing these huge billboards all over Merida for this concert but I couldn't find anywhere on them that said where the tickets were sold. Thanks for including that part.

I am very tempted and probably will buy tickets. I wonder how bad the cheap seats could really be? We could bring our lawn chairs and sit on the grass. It is such an incredible site for an incredible singer and I feel like it is a once in a lifetime event that I don't want to miss. I've heard it will be in front of the column of warriors or whatever that batch of columns is called to the side of the big pyramid. There is a lot of space around that and if the sound system is decent then a lawn chair and a pair of binoculars should do the trick.

I've no idea how to contact Ticketmaster in Mexico, got any clues?

As for INAH, they get no respect from me after they allowed the mormon church to destroy blocks of old colonial buildings that are within the historical centro of Merida and had to have INAH permits to even paint them a different color. INAH allowed the mormons to bulldoze them and build some ugly office buildings. Ya think they are crooks? I do. INAH has zero credibility in my book.

Jonna- I would love to go, it does sound like a once in a lifetime event! Take lots of pics and video if you can (and don't try the brown acid). Here's the link to the tickets...

Darn Kelly,, I just failed the 'ARE you a HI BROW ?"test..The Video was very nice..he has a great voice . but my subconscience kept yelling .."Yea It's Nice but it wouldn't be a Jimmy Buffett Concert!" No hope for Me.

Heh! I'll watch out and no 'extra' enhancements brown or not.

Thanks for the txmaster site. I just can't imagine paying more than $500p. I did pay twice that for good seats to see Vicente Fernandez but maybe not for Placido. Argh! I will think on this some more. I wonder if we stopped there on our way back to Merida if they have a map of the seating areas? I couldn't find one on TM. Did you know that hotels in the area have quadrupled their rates for that date? We are planning on taking the RV and parking it in their lot or in Piste.

Barry, I'd pay to see Jimmy Buffett too! I think he would be fabulous in concert in the Tulum ruins! Can you imagine? Our new (and broke) municipality of Tulum should get right on that.

Sounds like a lovely event, but the ticket prices - OUCH!!! That beautiful music set to such a beautiful background, I imagine would be incredible. We just can't afford most concerts these days. Seems everyone thinks they're worth $100 USD+ and most of those asking prices like that are multi-millionaires, some billionaires!

I've always wanted to see Paul McCartney, but there's no way we can afford his asking price. I say shame on him - doesn't he have enough money??? Or did Heather really break his billion + bank that badly?

Just gotta say this... i clicked on the video, but then scrolled down as I listened, thus getting to hear PD rendering his passionate, stirring version of la golondrina as I read about your harrowing situation with gang robbers (or what would you call them??) Tears were brimming from one eye for the beauty of PD's voice, and in the other for your plight!!! Whether you go or not to the concert, thanks for posting the video. I don't listen to that kind of music enough!

Barry- Aww, you made me giggle. No high brow test here at all! To each their own, whatever floats yer boat, KWIM?

Jonna- Yeah, it's pretty pricey. I don't know if there is anyone I would pay that much to see, but then again I'm a cheap bastard, LOL!

Joanne- I can't remember the last concert I went to that I paid for. In my youth (oh so long ago, haha), I always managed to get free tickets to big events, it was the nature of my job and the people I knew. Man, the good old days, teehee.

minshap- Aww, the multimedia extravaganza that is my blog, lol! Glad you enjoyed it and it had an emotional effect on you, hope you didn't cry for too long. :)

You could write and ask for press passes on behalf of your blog. Can't hurt to try maybe they will comp you a couple.