How to Disappoint a Three Year Old

We had one very sad little boy on our hands last night, and two disgruntled parents trying to make him feel better. We had gone down to Playa Marlin to participate in the sea turtle release program. We'd read that the event started at 4 o'clock on the beach and in typical Mexican fashion we went late, just before 5 o'clock. There didn't seem to be any events happening, but we saw an "official" looking guy and asked him what was up. He said he was just waiting for the turtles to arrive and we could just hang on. There were quite a few of us on the beach waiting, and waiting and waiting. Lots of families were coming down and speaking to "official" guy and he kept telling everyone to hold on.
We had prepped Max for what was coming, teeny tiny turtles who needed to be handled very delicately and helped back into the ocean. He was beyond excited, kept asking when he could help the turtles, where are the turtles, when could he see the turtles.

Around 6:30 the action started. "Official guy" started setting up some poles and ropes on the beach and brought out the megaphone. He THEN announced that this was a "private event"! The Boy Scouts (who weren't even there) would be releasing the turtles first and if there were any left, those of us who had been waiting hours MIGHT get a chance to release a baby! He told us to form a line and wait. By now it's dark and Max is really getting antsy. Suddenly we see the Boy Scouts, at least a hundred of them. We were jostled around, pushed around and continued to wait. The first line of Scouts finally got their turtles and away they went, though I couldn't see a darned thing for all the people in the pitch black, no lights allowed. When the clock turned 7:45 and more and more Scouts were coming, we realized that we were not going to get our chance and we had to somehow get Max out of there without having a meltdown.

Poor, poor kid. He thought he was there to do something good, to help the turtles. He was crying and saying he had to help them, they needed to go home and find their mommies. He was saying it was HIS turn. And in my mind, he was right. We got there early, checked in with an official and three hours later we left with nothing except the feeling that the whole thing was very poorly organized. There were a lot of disappointed little kids on that beach. If the official had told us right from the start that it was a "private" event, we would have enjoyed the beach for half an hour and then gone home. Instead, we had to explain to a sensitive little three year old why he couldn't help but all the kids who showed up at the last minute could. Poor guy.

Anywho, always looking for the silver lining, we did get to enjoy the beach at a dusk. We are usually early birds so don't often see the sun going down with all it's pink colours or the moon reflecting on the water. The turtles were released and able to find their way to the ocean (or so I was told, I couldn't see a thing). The turtle rescue and release programs are invaluable and I applaud their efforts, I just hope we get a chance to contribute in the future. 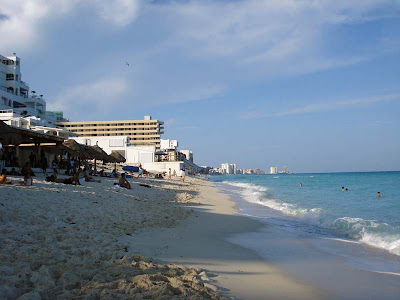 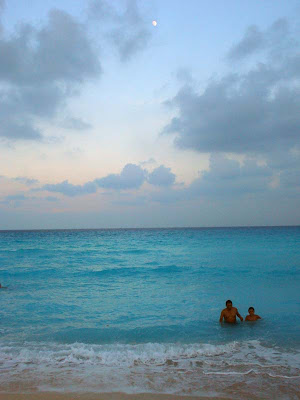 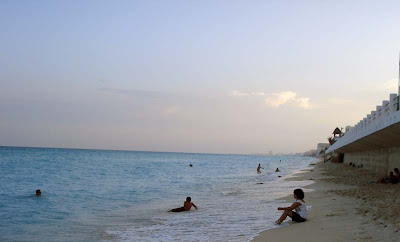 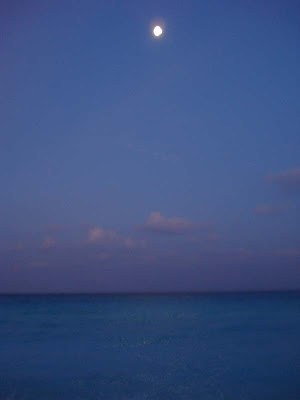 I wish I could have captured the moon's
reflection on the water, it was lovely
By CancunCanuck - October 12, 2008

As a mom, I feel your pain. Maybe you can take Max to The Turtle Farm on Isla and let him see how they raise the turtles to release. Just a thought for the poor broken hearted little Max!! If you want, you can bring him when I am on Isla the end of the month and I will take your little cutie to The Turtle Farm!!

Poor Max. I like Brenda’s idea of taking him to the turtle farm over on Isla. Max can see how the babies are cared for prior to being released.

And we can all have lunch!

Oh mannnn - my guys would have been heart broken!

Though - these kinds of experiences are what help our little ones learn how to handle disappointment. Important life lessons. I try to remember that each time my kids have a life disappointment.

Poor baby! He wanted to help the baby turtles find their mommies and then he couldn't. What a PITA!
I agree that it was very poorly organized. They should have told everyone that only the Boy Scouts would be allowed to release the turtles. :(

Give Max an extra hug from me and try to take him to the turtle farm.

Poor Max and poor you. I think they were not organized at all. They are teaching those poor kids great lessons. Being patient is not important. Not. I hope they feel real nice breaking your boys heart like that. Karma will get them mama. Dont you worry. Give max a big hug for me.

awww. poor Max, I feel your pain too. :(
I don't know, but if you guys could get down to Akumal some Sunday, you might contact the CEA down there and organize something for Max to be involved in.
http://www.ceakumal.org/

Well maybe you know how I feel about turtles...I would have been devastated, enraged and unable to make this comment due to the fact I would still be in the middle of a 5,000 word blog post, condemning the Scouts to eternal hell!!! I know...it wasn't their fault, but I've never felt the need to indulge in logic or reason. :)

I did release a bucket of baby turts into the sea in Sri Lanka once, and it was a truly memorable moment.

Trixie- I do look forward to taking him to the turtle farm, good idea!

Jackie- I like it, I like it, I'm just afraid he's going to want to set them all free, lol!

American Mommy- Yes, everything is a lesson these days, he doesn't walk away from anything without learning something. Same goes for me, I'm learning so much through his little eyes!

Sandye- The hug has been given, he's been getting a lot lately. I know he'll get another chance at it, it was just so hard to see how much he wanted to help and then not be able to! I'm glad I've got such a big hearted little guy though. :)

My3ros- Aww, Max is a trooper, he's going to be just fine. We've got some more adventures in the works coming up, he'll have new things to get excited about!

Laura- Thanks for the link, I will check that out. We'd love to get down to Akumal to visit fellow bloggers Jonna and Mimi. Last time we were there we did see a turtle in the sea, it was spectacular!

Gary- I so desperately wanted this to happen, partially because I knew it would make YOU happy, lol! And yeah, phooey to logic and reason, pshaw even! Sri Lankan turtles, how exotic and lucky you are! HOpefully I'll have some turtle stuff for you soon.

Would have, should have, could have but didnt. Thats sucks, sorry! I cant imagine how sad max must have been but what a great thing to try and have him do. I hope we both get to be a part of a program like that in the future.

ps- i went to the beach today and totally thought of you.

Aw, I'm so sorry for little Max. Fortunately or unfortunately, we live in a turtle reserve and while my kids have seen turtles make their way (naturally) to the sea, they've also found them dead (flattened by a car) back by our palapa (instead of the sea). Pike has found the most - 4 - back by our palapa that he has taken to the sea. I wish there was some way to ensure he'd see one but our nests are not managed and the tortugitas come out on their own accord.

Heather- I'm pleased that we can talk to Max about conservation and the environment and I hope we can give him many opportunities to put theory into practice. We WILL help the turtles one day! Hope you had a good day at the beach!

Kathy- Oh man, seeing little smooshed turtles would be horrible! But, how lucky you are to see them in their natural habitat. We're keeping our ears to the ground for another organized event, hopefully this year, if not, there is always next year and Max will have an even better understanding of what he is participating in.

Gosh, this post brought back memories of when Tulum used to be a small fishing village and we'd go out and camp right on the beach and us kids (yep, I'm talking about 15 years ago!!) would sometimes find a mother turtle on the beach laying her eggs. There was always some one from he government of from green peace making sure we didn't disturb the turtle but they'd let us kids stick around and watch and touch her and be a part of it ....

What a long way from today where you have to stand in line and wait for hours to even have a chance to touch a turtle... only to be told sorry but this is a "private event"....

I can totally understand Max's disappointment.

Fned- In some ways I think the changes are good. Children are being educated on the conservation of animals and are interested in the whole process, that's a good thing. It's a good thing that there are groups set up to protect the eggs and the moms, especially with so much new construction and so many people on the beaches. It would be lovely if we could just leave it to nature to do as it has been doing for thousands of years, but with the continuing construction, it's just not possible. So while yes, we were really disappointed personally, overall it was a good step for the future of the conservation and protection of the species.

Did that makes sense? LOL