So there was a little mix up on Thursday and the kitties did not get their manhood removed until Saturday. The people at RAP were lovely, can't blame them for a little misunderstanding with all the animals they were taking care of last week! So, when we took them on Saturday afternoon, I was able to observe the surgery on poor little Ziggy! I LOVE biology and have no problem with blood or guts, though it was hard to look in his little eyes and watch him kicking while they were cutting. They had to give him a little extra "goofy juice" to calm him down and complete the surgery, but all went well. I had to ask to see their little testes afterwards (yeah, I'm a sick puppy but come on ladies, I think we've all wanted to see some balls removed, oops, did I cross a line?) Little kitty testes look like pinto beans, in case you were wondering. And no, I didn't take any pictures, though I wish I had.

I was supposed to go to a party on Saturday afternoon, but because of the unexpected operation, I had to stay home with the fur babies for their recovery. Poor kittehs, waking up from the goofy juice had them very confused and disoriented! Their first steps were reallllllly wobbly, Buzz fell over a couple of times and almost went down the stairs, glad I was here. Ziggy had the extra juice so woke up a couple hours after Buzz, one eye shut and his head on crooked. Poor babies needed lots of love and comfort but didn't appear to be in any pain. I snuggled up with them on the couch and just kept them quiet and calm while the never quiet or calm Max went to the movies with his Daddy. Two hours of peace in the house? Whoohooo! Almost unheard of around here!

The next day they were back to their normal funky selves, jumping all over, eating like champs and purring up a storm. Love my (used to be) boys (kidding of course, they don't lose their boyness)! And now, some recent pics of the furry little brothers. 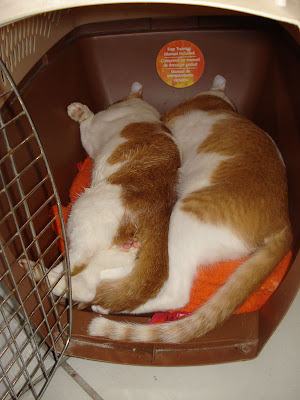 Zonked in the "Recovery Center" 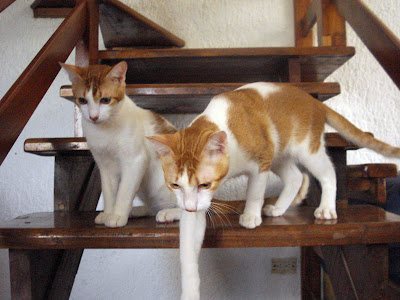 I TRIED to get a nice pic of them together
IMPOSSIBLE. This is as close as I could get. 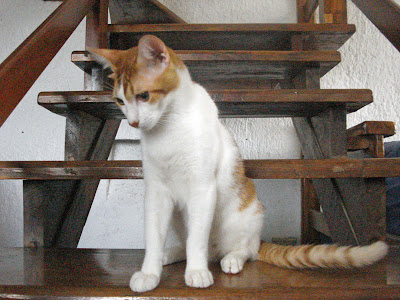 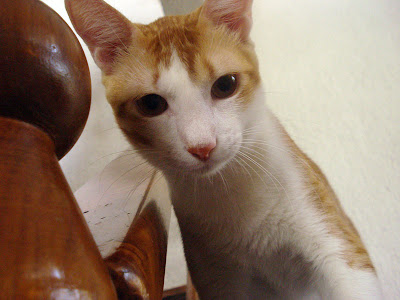 A Strange Shot of Buzz. I swear he is not an alien. 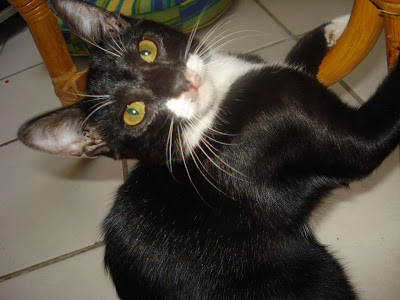 And who is this you say? Guest Kitty!
Guest kitty is the neighbour's cat named Mimi
who seems to spend more time in our house than
her own. The furboys like having a lady around. Thank
goodness they are all now fixed, it was like living in a
"cat house" of ill repute here, I was constantly preventing
kitty "love" for a few weeks! I felt like a real party pooper. :)

Oh my gosh .. Mimi looks just like a cat I once had only HIS name was Acey. Ziggy and Buzz so cute. Glad they are all better.

so sorry we didn't connect (can you believe it's a month today we came home?) I would have loved to cuddle the boys that have gottent so big, not to mention little Max Man!! Maybe next time!

You know I love you to pieces, but I just have to comment on this. You know that a major reason that Mexicans do NOT spay or neuter their pets, especially the boys, is that they believe that they will no longer be boys. You have just helped promote that myth. And you know better than that or you wouldn't have neutered them to begin with. I hope you can find some way to retract this or let people know that you were only joking.

You can get fake balls put in their little sacs there if you want...like fake boobs...

I think the mix-up happened because I brought the kits in the first time, I think they never got processed properly, even though I thought they had...or something. Well, I'm glad it got straightened out. And I'm glad they are ok now.

They look so big laying in the carrier, not as big standing up though. That Mimi is a cute one, but you knew I'd say that :)

It's a good thing you did for "the boys." Especially with that Mimi coming around being a little temptress!! Like Mexico needs more kittens!

Ale- That pic is so weird, he doesn't really have vampire eyes, lol, but in that photo he is pretty evil looking. :)

Joanne- Next time, next time! Has it been that long already? Man, time flies!!

IslaGringo- It was fully intended as a joke and I think I was pretty clear that I support the sterilization of animals. I've never heard anyone say that they wouldn't do it because of anything "macho", most if not all the cat owners I know do indeed sterilize their animals. It's the street cats and dogs that are neglected. I'll add a "just kidding" to make you happy, but I don't think I was doing any harm with the joke. The vet was joking with me, he asked "Son machos?", I said "Si", he laughed and said "Noo, ERAN machos, ahora son gatos" (joking about the past tense of their machoness). Sorry if I offended, certainly was not my intention, just a joke!

Rivergirl- Fake balls, teehee. I think they are doing just fine without. It all worked out in the end, little mix up, no biggie, all is well! Thanks again to you and RAP!

Trixie- Cats are always happier and healthier after being "fixed", it's the fair thing to do. They don't feel compelled to go out looking for "love" so they are much safer, they don't spray on the furniture to mark their territory, it's better all the way around for sure. Oh yeah, and they can't make any more kitties in a city that is crawling with unwanted animals! I was really happy that the neighbours got Mimi spayed last week too, they're all in recovery together, awwww.

I know my comment came across as bitchy but you know me better than that. Maybe the attitude is different in a larger city. I can't tell you how many times I have heard a Mexican here say they will not neuter their dog because he would no longer be "macho" and that is just not acceptable. Street dogs are a different story. Nobody cares what happens to them so they are the ones that get rounded up for the clinics. Thank God. Plus there is the problem of people thinking they have the best pit bull in the world and allow him to run wild, impregnating whatever he encounters. We could just go on and on about this, couldn't we!

Glad all is well in Kitty land. Buzz is not an alien, lol!
-h