We rarely ever get out to the hotel zone of Cancun. We never really spent a lot of time out there anyway but since Hubby changed jobs and doesn't work in the zona, our trips to TouristLandia are few and far between. We can't afford the restaurants, the night clubs just don't hold that much appeal and the beaches in the zone can't hold a candle to our secret little places out of town.

For those of you who don't know, Cancun is divided into the zona hotelera (hotel zone) and centro. (downtown) The HZ (as we often refer to it) is actually an island, a sand bar if you will, covered in hotels, restaurants and night clubs. There are a few residential areas, but they are mostly for "da rich folk" or folks richer than us anyway. Centro is where most of us peons live, residential areas for almost 700 000 residents of varying degrees of income and mall after mall after mall.

On Tuesday evening as we were very early for the Delgadillo concert (at Teatro Cancun in the HZ) we wandered around the party center for a while to kill time. The party center is an area chock full of bars and nightclubs, where all the spring break type action takes place every night of the year. We were there early while most tourists were still taking advantage of their all inclusive bars so it was pretty quiet, but I did snap a few pics of our little Vegas. 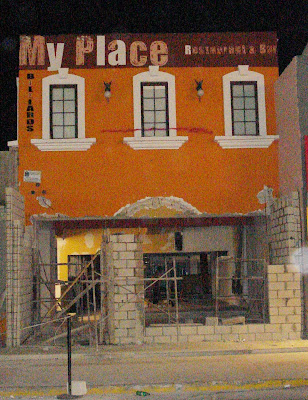 My Place R.I.P.
For old friends Joe and Janet
This was the friendliest bar in town
Wonder what's going in next? So sad to see
it like this after all J and J put into it. 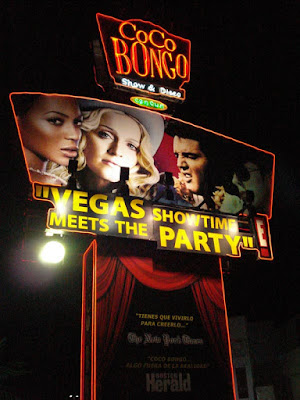 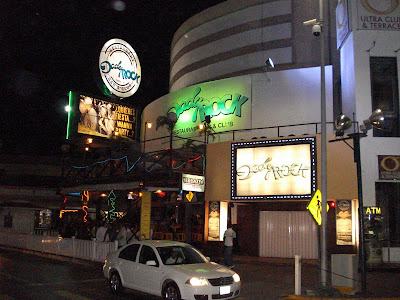 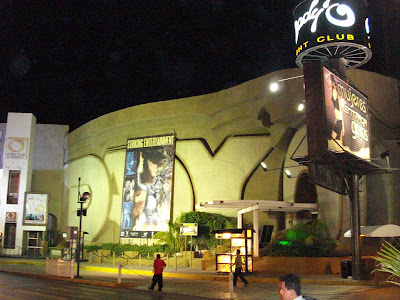 Dady'O
Famous for male hard body contests
and bikini contests
(Nope, haven't been there either!) 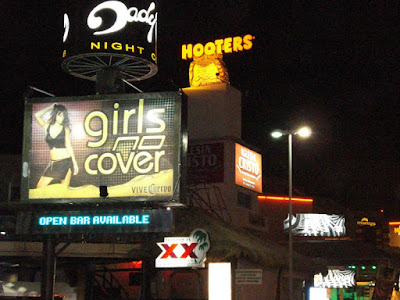 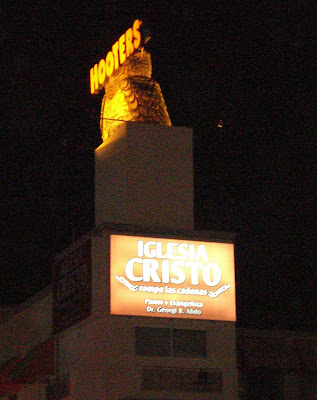 The Church of Christ has a tough job, trying to compete with
Hooters and hard bodies
(I can't believe I had never seen this sign before, it
cracked me up all night)

And there you have it, a brief look at a part of Cancun I rarely show you. I think I prefer the natural side of life here, all that neon hurts the eyes and all that booze hurts the head. I am glad it's there though, jobs and income from tourists is a vital part of life here, but I think I'll leave it to the tourists to enjoy. Salud!

Eegads, Canuck, look at My Place. Thanks for posting the picture - what, they ripped out the fountain and are building out to the street? But where will all the people park for Oxxo? I too have never been to the big clubs either(except one brief lap around Dady Rock), totally not my style. Living in the zh for three months as I did was beyond nightmarish.

When Northwest Airlines gave me a hotel voucher earlier this month for the Omni, in Hotel zone, I chose to not use it and go back to quiet Isla. I did take the free van ride through hotel zone and could not believe all the NOISE!! Clubs, rocking with disco style music!! All I could think of was "The Strip" in Vegas!! I did get an two nights on Isla without a change penalty since I didn't use the hotel voucher!!

Haven't been to Cancun since 1978 when it was just developing. There were few hotels - no clubs or bars and EVEN then, I thought it was too fake. Maybe I'll never get back there.......

Yep looks like the clubs in (TJ) Tiajuana which is 20 mins from my house and i spent way too many weekends at growing up, lol!
-h

I may be playing the "devils advocate", but I still like it (yes i know, tisk tisk)NOT that I go there, but it's kinda cool... In a way. I used to work there, for 2 years, and when I was 20, believe me - best time of my life...I have to admit, I never go anymore, but it is what it is!!! Soooo neat to see the pics you just posted, and how much it's all changed!!
Can't believe Laboom/Tequilaboom is still gone!!! (yes, I know it's not in party central, but still!!! was the coolest!!! I think that just aged me....Hehehe - again, thank for all the pics!!!!

JJ- I was thinking of you when I posted the pic, I wasn't sure if I should, kind of like the Por Esto photos of car wreck victims, KWIM? So sad, so sad.

Trixie- For some people Cancun is the "starter vacation", a safe place to check out the lay of the land in Mexico. It's a good center for exploring other parts of the state, there are a lot of conveniences and it's "easy". I am with you though, if I had to recommend a place to stay, it would probably be outside of the hotel zone, though for some people it provides what they are looking for in a vacation.

Babs- I can understand wanting to skip Cancun, but the rest of the state of Quintana Roo is well worth checking out again. Isla Mujeres, Tulum, Puerto Morelos, Akumal, Isla Holbox, some of my favourite places offer some very relaxing and educational trips without the glitz.

On Mexican Time- I think as we get older the hotel zone discos lose a lot of their appeal. One of my last visits to Pat O'Briens (not party center, but still a popular joint) I had a teeny bopper and her friends turn to me for advice. They said "You're old, what do you think?" And then I left and haven't been back, LOL!

Of all my trips to the Cancun area I can count on one hand the few times I went into the HZ. My very first trip to the area I stayed two nights at the downtown Holiday Inn because it was packaged with my airfare. I took their shuttle bus out to their beachfront hotel. 2nd time was when my sister wanted to leave Isla and go to Cancun to parasail. The other two times were unintentional as the shuttle to the ferry went through the HZ.
I liked your comment about Cancun being a “starter vacation” however I don’t believe that the people who only stay in the hotel zone and never leave it are really seeing the real Mexico. Why not go to Hawaii or Las Vegas???

Jackie- You are correct for sure, staying in the hotel zone you may as well be in any big city in the US. I ALWAYS recommend that people get out of the HZ, at least come visit the downtown area or do a ruins tour, otherwise what's the point of coming to another country? The die-hard Cancun tourists insist that it's the creature comforts, the high end restaurants, the luxury, the convenience combined with weather and ocean and beaches that keep them coming back. Personally, I need a bit more than that. I always say there is a big difference between "vacationers" and "travelers", "travelers" get out and see new things, "vacationers" just want a break from their lives. Both are valid, I just tend to fall into the "travelers" category.

JJ is lying. She went to La Boom with me and quickly houdinied!

He, he, he. Two of our best friends live RIGHT THERE on the beach. What a zoo!! Total chaos!!

My Guey- Teehee, busted JJ! I like the phrase "houdinied", can I steal it?

Michele- I can't imagine living there, it really is like a circus all the time. I bet they've seen some crazy drunken antics!

Hahaha - can you believe what comes out of some ppls mouths!! "your'e old"...uhhh..thanks! Reminds me of a time I was working at the city and a jovenes group came up and I think originally intended to hit on me... Until they asked my age , I said (at the time) 22 and he said "eww gross" no word of a lie! He was 18!! Can you believe that!!! LOL. Ahh..what I'd pay to be the ewww gross age again!

Hey Canuck,
So the Over 30 Club was destroyed by Wilma and My Place is closed now. Have you heard from Karaoke Joe? Have they opened or do they have plans to open another "Place"?

Oh, and where else would you recommend for us 40 somethings?

Hi beentravelin,
Last I heard Joe had gone back to the states with no plans of returning. I don't get out to the hotel zone much these days, but I really like "Yesterday" downtown (the band is amazing, total 80's music) and Roots Jazz Club. I think a lot of us "old" folks are finding they enjoy the smaller clubs in the HZ, Slices, Congo, etc, and some of the clubs havce 80's nights going. :)