A few weeks ago we were driving along when Hubby saw a sign for a concert and sighed deeply saying how much he would like to see the show. I had never heard of the singer but since I lurve Hubby so much I went out and bought tickets for the concert as a surprise. I searched Youtube for videos to know what I was getting myself into and I fell in love. Fernando Delgadillo is a "trovador" (troubador), a folk singer from Mexico who has been performing for the last twenty years. His music reminds me so much of my "good ole days" in Toronto when I worked with a lot of folk singers, I listened to a few songs and got a little misty to be honest.

Tuesday night finally rolled around and Miss LisaLoveLoca took the role of niñera (babysitter) f and off we went for a (shock gasp!) couple's night out! No three year old? Whatever would we do? I was a bit of an idiot and thought the concert started at 7 pm so we were two hours early for the 9 pm start. Ahem, oops. We went to the party center in the hotel zone for a walk around and a couple of drinks at the Black Pearl, killing time til the concert started. (Will have a post soon about the party center) then drove back to the Teatro Cancun for the show.

The theater was packed! I people watched and acted as fashion police while Hubby went for snacks. I was amazed at the range of wardrobe, from ripped jeans and sneakers to high fashion gowns, Mr. Delgadillo obviously appeals to all kinds of people, rich, poor, young, old, this was not just for us middle aged folk. When Fernando finally stepped onto a very bare stage, the crowd went crazy, it was very exciting! And then I fell in love with him. Really, his repartee was so easy going, calming, warm and funny. His songs really struck a chord with me, several pieces about the ocean and love and life, I was mesmerized. In between songs he would tell stories or read some of his poems. He read a poem about sea shells that I am desperately trying to find online but alas, no luck! I had goosebumps while he read it, I really connected to his words (in Spanish no less). At one point Hubby leaned over to me and whispered "He's a genius", and I must agree. We had a lovely time and would like to thank LisaLove for her help in child wrangling, it was nice to get out just the two of us, I don't remember the last time that happened! 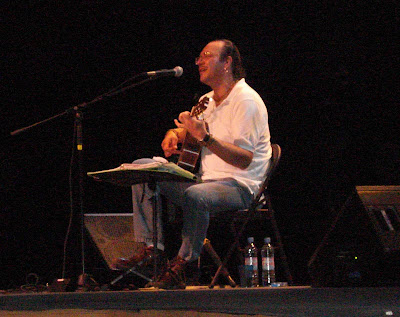 Here's a couple of performance videos. I wish I could translate all of it for you, he's very funny and has such an interesting and warm view of the world. A true poet, a fascinating trovador and a beautiful musician. I chose clips where he was telling a story to introduce the song, his tales were a highlight of his performance. Enjoy!

You are MORE than welcome!!

As you know, I feel it is VERY important for parents to have me AND us time- it helps maintain mental sanity so no one kills the active 3 year old!! I'm pro- no- child- killing! *giggles*

Anytime you need a Tia Lisa to hang out you just lemme know!

Congrats on getting out alone! Husband and I had date night last weekend too and had a great time.

OMG, "Hoy ten Miedo de mi" is one of my absolute favorite songs!!!! I'm so jealous of you guys! The concert sounds like it was awesome and I'm glad you and Hubby got to have a great date night!! :D

OMG, Fned!!!!! You beat me to it!!!! Hoy Ten miedo de mi is one of my favorites (all time, just not Delgadillo) and Entre Pairos y Derivas is a close second.

I'm soooooooooooo jealous, but glad you had a wonderful time. I love, love, love this man.

Dear amiga! I am always lurking around. Fernando Delgadillo is really a genius. What a poet! I downloaded one of his EPs free online and his music help me through some interesting times... particularly "no me pidas ser tu amigo" (although that is a lesson I keep avoiding to learn, me being such a friendly person ;-) )
I hope you have also heard Silvio Rodriguez, and in a lesser extent, Ricardo Arjona (my paisano, btw).
Saludos desde Toronto, la nieve dice "hi" :-p

Tia Lisa- When I asked Max who he loved he said "Mommy, Daddy and Tia Lisa (and T.K.)", you did a fab job. He came back only slightly damaged, you rock! :P

American Mommy- It had been far too long, we must remember to do it more often. Glad you got out with your hubby!

Fned- Ah, I just listened to it again, it's great. We had a fab time, thanks.

Melissa- Wish you could have joined us! (Can you be here December 11th to see Air Supply?)

Manolo!!! So great to see you here old friend. I'll check out those musicians, thanks! I really did fall in love with this man, trova reminds me of so many folk performances I saw in Toronto. I'm sure you've seen your share on campus. :) Hola back at the snow, tell it I won't be seeing it soon! Glad you chimed in, you've been missed.

Oh goody! I clicked in on this post when I saw it was about Delgadillo, and was hoping you'd have a video of his best-ever "Hoy ten miedo de mi" and you did! Loved listening to the videos and lucky you getting to see him!

Manolo's right! YOU GOTTA listen to Silvio (I did a post on him a few weeks ago)... he's like one of the greatest living Trova singers/performers/writers of all times!!! And Ricardo Arjona was my ultimate teen idol when I was growing up. I haven't listened to his latest CDs but "Si el Norte Fuera el Sur" and "Historias" are permanent Albums on my iPod Playlists!!!

Minshap- Phew, glad I put up the right video, lol! I am really enjoying learning more trova artists, it's definitely a genre that makes me happy.

Fned- I'm on it, listening to some Silvio right now, FABULOUS!

Thank you for the great night.
Love u.