One of my favourite things about living in Mexico is the posada season. It's much like Christmas/Holiday party season, with a few uniquely Mexican rituals thrown into the mix. For office posadas, of course there is the typical "drink til you say too much to the boss" aspect, but add into it the ponche (Christmas drink of Mexico, plays the same role as egg nog in other countries), the piñata and the "pidiendo posada" song and it's a different matter.
Saturday was our first posada of the year, this one without any fun alcohol as it was for Max's school, but I'm telling you, a little rum in the punch would have gone a long way. We arrived at the "jardin de fiesta" ("party garden") around 4 o'clock and set Max free with his friends to play in the bouncy house, the climbing equipment, the soccer field, the basketball court and to just enjoy the general chaos that forty kids under 5 can create. We set about chatting with the other parents, soothing the owies that happen with the inevitable collisions and waiting for the big show. I do love Max's school in this respect, they always have the kids singing and dancing to real choreography, costumes and the whole shebang. It's like bonus education in the entertainment industry. Max's class did two songs, "Navidad Rock" and "Feliz Navidad", rocking it out in grand three year old style. I took some video, but won't be posting it as Max decided to take a nose picking break in the middle of one of the songs which really ruined the beauty of the moment. Well, not ruined for me, I thought it was hysterical, but I'm guessing no one else really wants to see that.

After the big show, the winners of the piñata contest were announced and the kids commenced with whacking the crap (candy) out of the best ones. Once all the candy was collected and the tears dried of the kids who weren't aggressive enough to collect fistfuls of sugar, it was time for Santa Claus. Of course, time for more tears for the little ones who were completely terrified of the white bearded guy. Max has no such hangups and loudly announced to Santa (and everyone else) that he was "un niño bueno" (a good boy) and that Santa was going to bring him "un camion de bombero" (fire truck). Gifts and commercialism out of the way, candles were distributed and we were split into two groups for the "pidiendo posada" portion of the event. Basically it's a recreation of Mary and Joseph asking for shelter with baby Jesus, the "no room at the Inn" thing. As is the custom, half the party goers were sent outside and half stayed inside, all holding candles and the lyrics sheet. This is one of those songs that is familiar to everyone, though no one can ever remember the words (or sing it very well, it's a tough song!) Once the "peregrinos" ("pilgrims or travelers") were welcomed in again, we set about eating a fine (though child like) dinner of spaghetti, hot dogs and tamales. The kids were still running wild, now pumped full of sugar and treats, tired and hyper and certainly not willing to leave. Of course the parents were more than ready to go so the exodus of screaming, crying, sticky faced kids began and the night was sadly (blessedly) over.

Here's a couple of pics from the grand event.... 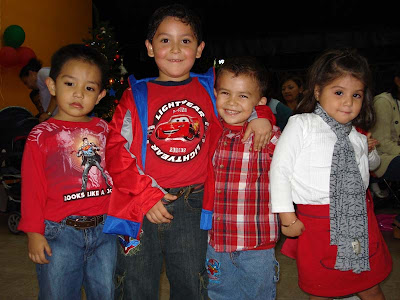 Max and His Best Buddies and His Girl 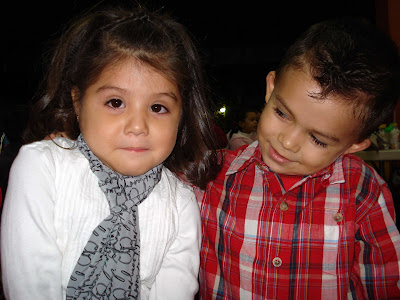 Max and His Novia (girlfriend) Karyme 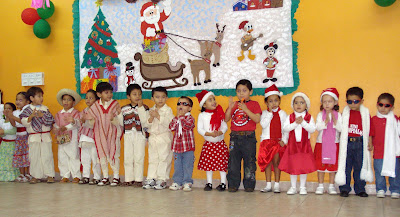 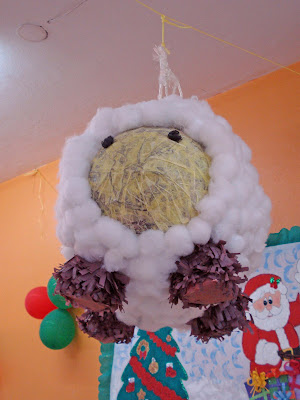 The Winner of the Piñata Contest 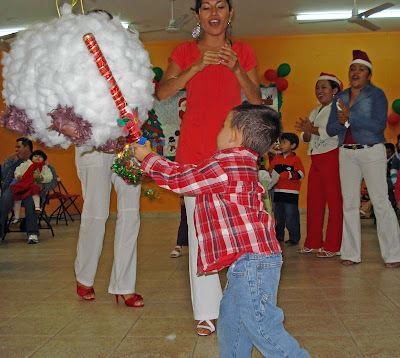 Max at the Bat 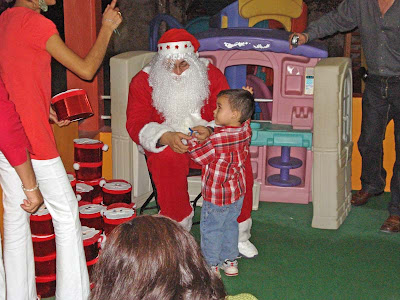 "I've been a good boy Santa, now where's the goods?"

So, one down, several more to go. Tomorrow is the posada for Hubby's office, spouses not invited, booo. Saturday is the night of the big event for my work, it's ALWAYS a good time and I have no doubt that this year will be no different, we're off on a pirate booze cruise. I'm sure there will be a few more impromptu posadas, we seem to always get invited to some in the neighbourhood. Here's hoping that your holiday parties are full of laughs, good food and egg nog. Don't drink and drive!

Maaaaannn, you're really making it hard to enjoy the holidays in boring old Paris where there's no Posadas!!!

Max looks sooo cute in these pics.. you can see he's having a ball!!

Almost makes me want one !!! LOL

Thanks for the commentary and the pics of Max's Posada. Pictures of Max always cheer me up, and they were just what I needed today. :D

LOL, make sure you keep that video to show his wife when he get married....snicker.
Thanks for the Max update!
regards,
Theresa

Thanks for the blog and pictures, they are great. I too love the pic of Max and his girlfriend, it is just precious.

Sounds like a good time. Im so excited about our first posada here. Please post about the others you go to not sure if we will get to go to ours due to my husbands crazy schedule.

Man maybe i need to go back to work just for the holiday parties, jk! Loving Max's school, just perfect mix of education and performance.
-h

I think you missed the boat by not posting the video. We love nose picking in public! And what kind of posada is that at Hubby's office with no spouses invited? Cheap bastards. But cheer up. It's Alguinaldo time again!

Man, I have not heard about any posadas here in Tulum. Probably because we do not know anyone here yet. Next year will be better. Oh well. With kids as nuts as mine it always feels like we are surrounded by hundred of hyper kids. :)

On Mexican Time- Don't let the cute fool you, it's covering a whole lot of trouble! :)

Sandye- Glad Max could cheer you up, hope you are having a better day today!

Amy- Glad you liked them, I think I should print that picture out and share it with la novia's parents.

Amanda- Have a great time at your first, jump in with both feet and embrace the moment! I worried so much about not knowing how things were done at my first one that I missed the fun, just go with the flow (and the tequila!)

Heather- Heck yes, work parties can be a blast (or a horror, heehee). I am really digging Max's school, I love the performance stuff they bring to his education.

Erica- Oh no, don't show Sofi, lol! No need for jealousy, lots of Max to go around and apparently his little girlfriend has more than one boyfriend, so sharing is in with the preschool set. ;-)

Wayne- Cheap bastards indeed!!! It's ok, I'm not bringing him to mine either, bwahahaha. Spouses were invited to mine, at a cost of 510 pesos per head. His head ain't worth that much. ;-)

Rosas Clan- It will come, I promise! My first posadas were all pretty casual, in the neighbourhood, walking by and having neighbours say "come in and join us". Especially with kids in tow! I bet you are surrounded by little munchkins, teehee. And hyper? Oh, I know hyper!