Are You Ready for Some Futbol?

Futbol (soccer) or "fut" (pronounced like "food", not "hut") is to Mexico as hockey is to Canada. Kids here are soccer crazy, getting their first kicks in as soon as their little legs start moving. It's the great equalizer, something that everyone can share from the poorest to the richest, youngest to oldest, find a scrap of bare land and something to kick, and game ON. From neighbourhood pick up games to full fledged official tournaments, everyone gets in on the action, I've even seen abuelas (grandmas) out-playing their grandkids in the park.

Not only is it a game that is played by everyone, but the professional league is a daily topic of conversation. In Cancun we've got the pro team "Atlante", new to town just last year and already a success. I may not be a soccer lover myself, but I'm always happy to support the local franchise, Arriba Potros! (Potros is the team nickname, means, "young horses"). I don't know all the ins and outs of the season or the tournaments, but I at least try to know when Atlante is playing so I can participate in the inevitable soccer conversations I encounter. And I certainly know that Mexicans consider their national team to be a joke, no one expects them to win anything, let alone a World Cup. If I even mention the national team, I get a sarcastic grin and a "Oooh si, son muy buenos", (oh yeah, they're really good) followed by an eye roll, but they love them and cheer for them when they play, knowing that most likely they'll be disappointed in the outcome.

On Saturday Hubby decided to take Max to an Atlante game as they were playing his hometown team, Puebla. We hit the ticket office in the afternoon to see if we could get some seats and voila, 100 pesos for Hubby, Max in for free. Unfortunately, the game was not until 9 pm, so of course our almost four year old had a nice little hissy fit that he couldn't go into the stadium NOW. Thankfully a good-hearted security officer saw what was going on and waved us over to the gate. He let us in to have a look at the empty stadium and Max was temporarily appeased.

Here's a peek inside the Atlante stadium in Cancun...... 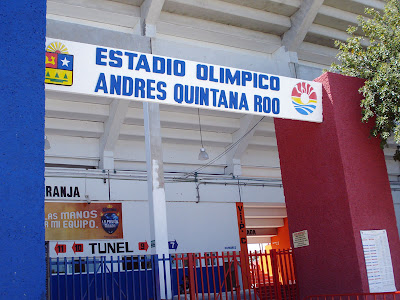 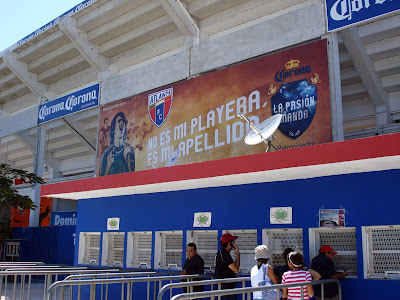 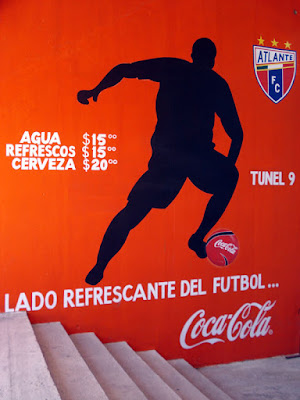 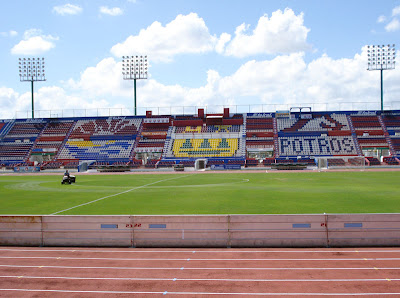 The boys went to the game that night (I gracefully declined and went to an ex-pat party instead) and they had a great time. Puebla won, Hubby was happy and Max came home singing all the soccer chants (and not using any bad words, phew!). I've hidden the EXTREMELY LOUD HORN that Hubby bought for him, we'll save that for game days and not hangover days thankyouverymuch.

I think I'll go with them for the next game, with some cold beer, stadium food and enormous amounts of people watching at my disposal, I would keep myself entertained. As long as you don't ask me what's going on in the game! Here's how I call a soccer game: "Red guy has it, the other red guy has it, now he lost it and the blue guy has it, blue guy has it, blue guy has it, blue guy lost it now red guy has it". And so on for 90 minutes. If you're lucky, I will scream "GOOOOOOOOOOOOOOOOL" once or twice in that time, but only if you're really lucky. I admit I have a hard time paying attention to a game where nothing ever happens, who wants to watch 90 minutes of back and forth and end up with a tie score of 0-0? I love soccer for all the things it represents to the community, but as for the game itself, it's just a big yawn for me. But, on that note, Go Cancun, Arriba Atlante, Viva Potros!
By CancunCanuck - March 23, 2009

I used to play soccer and used to love watching it. It's a lot more entertaining when you know the game very well and have a passion for it. And 0-0 games are usually some of the most nail-biting ones. Going to a futbol game in Mexico should be... interesting. The vast majority of the world seems practically obsessed with the sport, and it shows. :)

How cool to see the stadium empty.

My son played futbol with Canadians for many years and loved it. When Max starts playing you'll learn the game.

Have you got Max a hockey stick yet? He's a good portion canuck, and if you get him playing both sports, he'll be like a gretzky and turn out amazing in one of them!
I guess rinks aren't very common down there though...

The new field is great. I was at the old field where the guy changed the score by hand climbing up the ladder!

If nothing more, it's a dozen fit men in shorts...

Jajajaja - Soccer/Futbol happens to be one of my GREATEST joys in life! LOL! My grandpa played professionally in Europe, my brothers played in Spain for a few summers, and I played on the Alberta team for 9 years! If it wasn't for a battered knee, who knows where I'd be! LOL!! I'm OBSESSED!! The only reason this canuck is not headed to the next World Cup in '10 is because it's in Africa, a little far away, and from what I have heard DANGEROUS! Oh well, '14 is in Brazil!!!

We joke - Futbol is a religion to most of the world, except Canada and the US!

My husband is a Pumas fan (I can sing/chant the Pumas little cheer) so I am forced to watch it. I have a couple "crushes" on some players (Oswaldo Sanchez is hot even though he doesn't play as well as he used to). But I still don't get the details of the game.

We went to our first Atlante game in February where we lost to Chiapas 0-2. Oh well. But I had a great time people watching. The owner of the Chiapas team was sitting in front of us and there was lots of drama with his body guard keeping people away from him.

I think you'll have a great time.

Hi,
We daily confirm that Cancun Mexico has everything for entertainment and fun and for sport. Good photos of the stadium. Thanks for sharing.

These games are the best. Ruben and I saw Mexico play Bolivia a few years ago when we lived in the USA. It was INTENSE!!! I have never seen anything like it. Ruben bought Akilean little tiny soccer cleats. He looks so cute.

Amanda Lynn- I used to play as well, but it was never my favourite. I want to see some action, scoring, crowd going wild kind of stuff. Basketball is much more my style. :)

Calypso- I think Cruz Azul is popular everywhere, there are a lot of fans here as well. Pumas and Chivas are the others that are popular, but it's widely known that you must hate "America" (the team folks, not the country).

Gaelyn- I'm kind of dreading becoming a soccer mom. We go to watch my friend's son play and I get crazy every time a child gets kicked in the shins, oh the violence! (I know, I'm too soft!) It was very cool to be in the stadium with no one else, glad to have met the nice security guard.

mare ad mare- Oooh, no hockey for my boy! I grew up in small town Ontario and learned to HATE hockey pretty fast. If you weren't a hockey player, you were a puck bunny, sigh. Far too much violence for me! And no, not a lot of rinks around, lol. Hubby did play a bit of hockey in Puebla growing up though. I sometimes joke that I was kicked out of Canada for hating hockey, haha.

K.W.- This is just the temporary field, Hubby tells me they are going to be building an even bigger one. I think I would have liked to have seen the old one, sounds cool to me!

Brice- True true true about fit men in shorts, but I have big issues with their hairstyles. :)

On Mexican Time- Wow, you are a fan, do you ever play in any pick up games around town? I'm sure a nice looking girl like you wouldn't need to throw a hissy, just bat a few eyelashes, heehee.

Dichuy- Oswaldo Sanchez is a handsome, handsome man indeed! I used to get the details of the game, but I kind of stopped caring (sorry fans!). I really do prefer a higher scoring game. I'm of the mind that these guys are paid to score but they never do their job, lol!

Rosas Clan- You'll have to get up to Cancun for a game sometime, get the kids screaming together, lol!

Glad the boys went and hopefully you make the next one. I get the best of both worlds with being able to understand the passion for the game and sitting in the stands people watching and eating popcorn. Please tell me what stadium food they serve there. Even in NY im shocked at the stadium food compared to San Diego or even Canada. lol!
-h

Heather- I know you love the game and I totally understand why, it's a big part of your life! Mmm, stadium food, let's see, they have the regular hot dogs and popcorn, arracheras, tacos, kibis, marquesitas, raspados, todo eso! And the beer is cold, cold, cold, lol!