I think it's become quite obvious that I am a beach lover, obvious at least if you've followed the blog for oh, five minutes. You may have noticed that though we live in Cancun, we rarely visit the beaches here, we go out of town when looking for sea and sand. There are a number of reasons for that, number one, calmer waters in Puerto Morelos and Isla Blanca are better for Max, number two, fewer tourists (no offense intended!) and number three, the beautiful beaches of Cancun have taken quite a beating since Hurricane Wilma in 2005. The beach erosion on the east side of Cancun island is noticeable and sad. When I first arrived in 2003, I was blown away by the huge spans of sand, soft and white and seemingly endless. Wilma did her number on us and took it all away, leaving the ocean pounding against sea walls and exposing rocks and boulders all along the shore. While the government and hotels spent millions of dollars to recover the beaches in 2006, they ignored the advice of the company doing the rebuilding and didn't take precautions to prevent the sand from being washed back out to sea. Shortly after the recovery project ended, the beach was gone again.

Cut to March 2009, over three years after Wilma and we still see some badly eroded beach. Oh it comes and goes, nature takes away and gives back depending on the weather, but it is far from what it used to be. The government has a plan in place and is taking bids from companies wishing to rebuild not only the beaches of Cancun, but of Playa del Carmen and Cozumel as well. I've been following the back and forth and the blah blah blah of the plan in the news, a lot of round and round of who is going to pay for what and where and when and all that jazz. Right now it seems that the plan is to start the project in April or May (ummm, I'll believe it when I see it) and take several months to complete. When things really get rolling, I'll be sure the share the details.

In the meantime, I have been taking some beach strolls this week, to get some air, some exercise and have a look at how the beaches are faring. I went out twice this week, on two very different weather days and here's what I saw. These were all taken between the Ritz Carlton and the Gran Melia, some on a beautiful sunny day (Monday) and some today while it was very windy, rough seas and occasional rain. 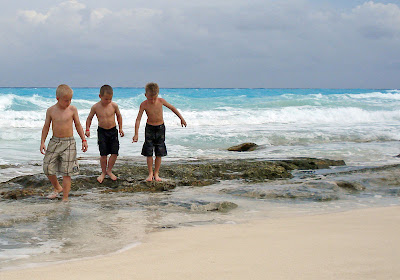 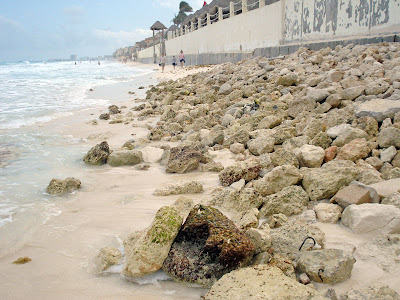 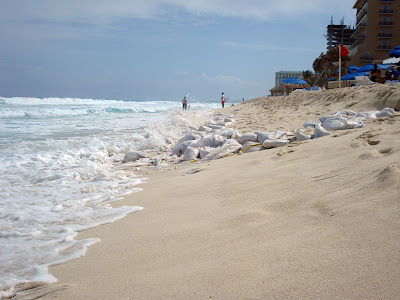 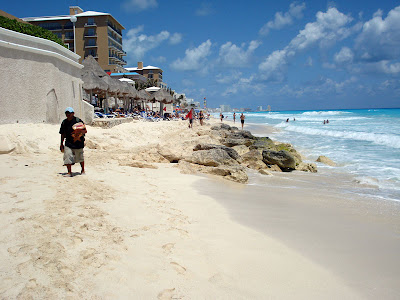 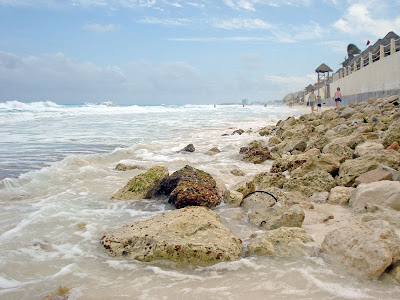 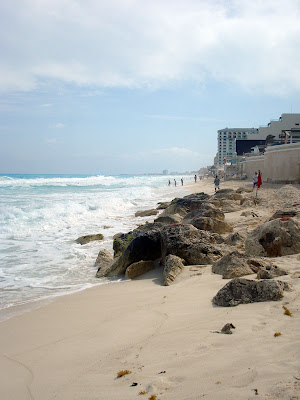 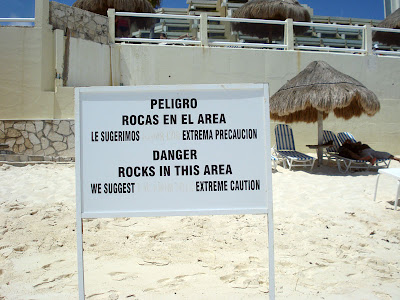 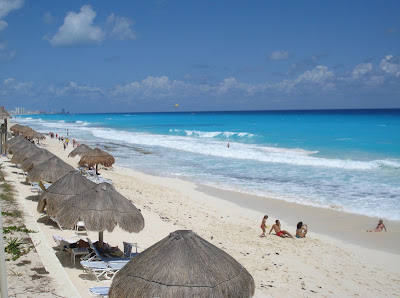 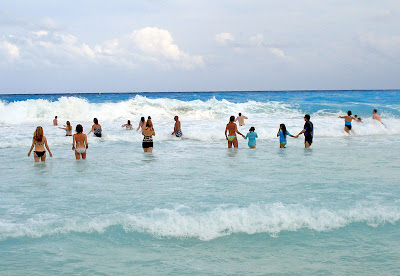 As you can see by the last photo, the rough seas and rocks are not stopping people from enjoying the incredible Caribbean. The red flags were out and the life guards were certainly on their toes today, I heard a lot of whistles and saw the guards directing people away from particularly rocky places. For once, Max had no interest in going swimming, he was screaming "Stupid waves!" every time we got hit by the crashing surf, it was just a bit too rough for his tastes. Spoiled, I tell ya.

So bring on the beach recovery, let's hope they do the job right this time and don't throw another bazillion dollars out to sea. I'll keep you posted when something definitive happens, it's still a lot of "yada yada yada" right now, I'll be happy when they've hired a company and set a start date. In the meantime, we've always got Puerto Morelos.....


p.s. Big huge thanks to jimincancun, regular contributor to Cancun forums and a wealth of knowledge. He's been keeping up with the "blah blah blah" of the beach recovery for all of us and sharing it on CancunCare with fantastic summaries and translations. Thanks Jim!

What beach? OMG. Hope it can be replaced correctly, but you are in manna land. I was at Playa Del Carmen in the early 1990s and enjoyed wonder beaches. At that time maybe not quite so much developemnt. Will be interesting to see what happens.

Wow! Its amazing! I still keep in my laptop the pics of the sea in front of Melia Cancun (taken in 2003) and comparing both pics it looks quite different...

Sad .. I was in Cancun during the last beach recovery and the sand just wasn't as soft and fine. Thank goodness the beach at my timeshare is still the same. (you know where) But with hurricane season coming, who knows what will become of the recovery! Hubby is at the Krystal, he said NO beach, so he went to the Sands yesterday.

I hope they are able to have as much success as there has been on Playa Norte in Isla Mujeres. It has made such a dramatic difference - well worth the cost involved! And not to mention an amazing process to watch!

Thanks for the update.

When I was at the Royal Solaris, I didn't mind the short beach, but the rocks were a bit of a pain.
Still, the east beach now is better than Temptation's beach was 4 years ago...

I knew that you were going to say you wanted to get away from the tourist. There is nothing wrong with that. I vacillate between wanting to be super friendly and helpful with them to wanting to duck and hide so they don't ask me questions.

I was going to go to Cancun in 2006, but because of the hurricane we couldn't and we went to the DR instead. It was lovely, as well, but I missed Cancun. It's sad to hear that it still hasn't been fixed. Sounds like another case of Latin American slow inefficiency.

Wow, the beaches really have changed! I've noticed it in Playa del Carmen, but I haven't been to Cancun in awhile. The ocean is still stunning, though. It looks like I'll be in Cozumel in May, it will be interesting to see if they're doing any beach recovery work then (not holding my breath).

Gaelyn- Development has a huge impact on the beaches, very sad to see. When they did the recovery project after Wilma, the beaches looked fantastic, big wide spans of sand, hopefully they'll do the same but implement the necessary precautions this time to prevent further erosion. I think this will be a battle to fight for years to come.

Lorena- The whole stretch of beach on the east side was destroyed by Wilma, she made a horrible impact on our coast. I sure hope we can bring back some of what was lost.

K.W.- The sand was coarser after the recovery, it was brought from near the reefs of Isla Mujeres so hadn't had the chance to naturally soften in the waves and movement of the ocean. Though it's not as soft as it once was, I still think it's better than the sand on the shores of Lake Erie or St. Clair, lol!

MD in Texas- Playa Norte has improved, a combination of natural ebb and flow and the sand bags and barriers they created. Ironically it wasn't Wilma that killed Playa Norte, it was the reconstruction project, the dredging around Isla changed the natural underwater geography and they found the sand slipping away.

Brice- The Temptation beach has always been kind of "meh" for me, though there are some beautiful spots on the north side. The rocks can be killer if you're not watching your step, I cracked my feet against a few of them this week.

Sara- Teehee, I don't hate the tourists, I like helping them out when I can and it's often fun to chat with them. The Cancun beaches are often full of locals on weekends too, it's the crowd more than anything that turns me off. I was pretty amazed at how quickly they got on the last reconstruction, they just didn't heed the advice of the builders and put in geotubes (or other barriers). They spent something like 26 million USD on the last one, I think it's just taken them this long to come up with more moolah.

Kelly- Last time I was in Playa I noticed that some of the beaches were in rough shape! It's been a looooooong time since I've been in Cozumel (it's where I first lived when I came to Mexico), I hope you have a great trip. I'm pretty darned sure you won't be seeing any action with reconstruction in May, I would be very, very surprised.

Hello sweetie! Can you believe I have never been to Cancun? I almost got to go this year due to a friend of mine getting married on the beach, but she changed her mind and now we are going to Jamaica for the wedding!

I love Mexico and hope to have a second home there in the future. It will be in Cabo though, I have been visiting that place for almost 15 years and never get tired of it.

I hope to come down to Cancun this summer.

Enjoy keeping up with you on twitter! I am Cultured Cowgirl there.

Have a fabulous weekend!

xoxo Meg- Hola! I've never been to Cabo, so we're even. I think west coasters stick to the west coast, east coasters, east coast, just makes sense flight wise. I hope you manage to make it to this end of the country, it's quite different and in my humble opinion, beautiful! See you in twitterlandia!

Thanks so much for this update. I've been trying for months to get reliable information from TripAdvisor forums, but it appears that the folks who should be in the know just don't want to reply. I do hope they can manage to restore these beaches to pre-Wilma conditions. Folks who have only visited since then really haven't seen what made this such a special place. If you don't mind, I'd like to link to your blog from a few pics in my Flickr account. I have a few Cancum images there that potential visitors look up pretty regularly, and they should have the most current info. Thanks, again.

Gerard- Thanks for your comment, I will be updating when something definitive happens (ie, company is hired and a date is set). Go ahead and link, that would be great, thanks. If you're comfortable, go ahead and leave a comment with a link to your flick, would love to see your photos. BTW, I used to be a heavy Trip Advisor user, I think the reason for a lack of information is just that, a lack of info from any sources. Lots of back and forth about who is paying for what, where it will happen and so on and so on. I know jimincancun posts on TA and has been pretty up front with his info, he's a great "go-to guy" on the forums. :)

I posted a link to your blog in my Flickr Cancun sets. The links below will take you directly to those sets, if you are interested.

Texas Grape Rustler- Thanks for the link, great photos!