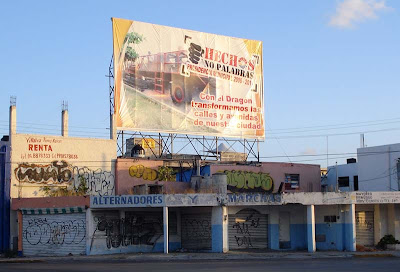 The local Cancun government's latest slogan is "Hechos, No Palabras", "Actions, Not Words" and posters and billboards are all over town with this phrase and logo. This billboard is advertising the "Dragon", the road machine set to transform the streets of Cancun. While the city is still plagued by horrid potholes, it seems like some work really is getting done, slowly but surely streets are actually being fixed (though I have yet to see "The Dragon" in action, oh maybe one day I will be so lucky!). Will be interesting to see how long the repairs last once we see rainy season.

Now, I wonder if they've got a machine up their sleeves for cleaning up graffiti?

This is random, but there have been things on the local news about Catholic Charities and other organizations cancelling mission trips to Mexico - just today, a local school announced they were cancelling a music tour to Mexico City. I think it gets covered more on the news here in Texas because of proximity, but it makes me sad because I wonder if people are overreacting which is causing a chain reaction.

Of course is overreacting. Yesterday we went to check the beaches at the Hotel Zone and I didn't notice that the tourists were worried or hiding.

I told Canucka she should ask them if they find Cancun unsafe.

It is just my point of view.

Believe it or not, a few of those stores use to be open!

Kelly- It's a valid thought indeed. I do think that Texas is seeing a whole lot more than even the northern states of the US, the proximity to the border and the "danger zones" makes that inevitable. It is sad that charitable institutions may be pulling out of Mexico at a time when they are probably needed more than ever. The economic crisis is impacting the poorest of the poor here (well, everyone), losing any kind of support could be devastating.

Jorge- Yeah, it was really scary in the hotel zone yesterday, huh? :) If I can get a chance, I just might go out and do some on the street interviews to see how tourists feel.

My Way- I know, it wasn't long ago that the building was functioning! I think you would be surprised by the growing amount of graffiti, it's certainly a lot worse than it was last year. I wish there were some real graffiti artists around, all the stupid tagging just bugs me but when I see a real piece of art, it doesn't feel like vandalism anymore. Hugs girl!

Hope its a step in the right direction.
-h