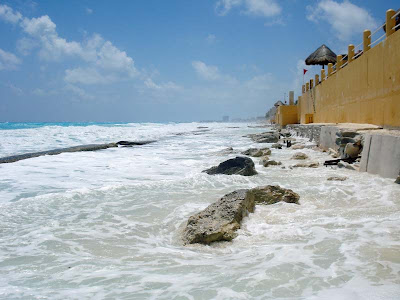 "Beach" behind the Fiesta Americana Condesa

The federal Secretary of Tourism and the government of Quintana Roo have announced that the original bidding process on the beach recovery process is now "deserted".  According to reports, the companies that have submitted proposals have not met the requirements of the project.  A new international tender will be released on April 16 in the hopes of finding a contractor that fully complies with the terms of the plan.  The financial resources for the project remain in trust for the "restoration, recovery, support and maintenance of the Federal Maritime Terrestrial Zone of the State of Quintana Roo".

As the original plan has been abandoned, no new start dates have been announced.  Citizens and politicians of the island of Cozumel is still protesting the plan to dredge sand from its northern shore, calling for more environmental impact studies, which could further delay the project.

If I may be so bold as to add a personal opinion, I think they really need to consider delaying this project until after the hurricane season (June-November).  With all the problems in finding an  appropriate contractor and the complaints about a lack of environmental impact studies, I believe they should take the time to do this right and not rush into things.  Starting the project during hurricane season seems downright reckless in my opinion, millions of dollars of work could be washed away mid-project by even a small hurricane or tropical storm.  While I would love to see the beaches recovered quickly, I would hate for it to be done during a time when the risk is high for a disaster.  The plan does (should?) call for measures to maintain the beaches in case of severe weather, but if the weather comes before the protections are in place, all could be lost.  I'm not a scientist by any means, so perhaps I am wrong on this count, but it seems logical to me.  If the project had started on time (this month), they could have finished before the start of the hurricane season, but with these delays, it appears they would have a start date sometime in June.  Bad timing if you ask me.  Hoteliers appear to disagree with me, this morning's news has them begging for a quick start to the program.  While I understand their concerns, I do think it would be foolish to throw away the millions of dollars at stake.  Just my humble opinion of course.

I couldn't agree more .. wait till after hurricane season. Maybe that's why companies aren't in such a rush to met the requirements.

Your approach makes sense to me. I would simply add one point. Scientists are not policy makers. They are advisors, like lawyers and financiers. They are no better at predictiong what will haoppen than is anyone else. They can merely rely on the past and try to provide parameters. As a society, we are far too willing to rely on powers that scientists do not possess.

This delay from my perspective is far from the first, last summer the shouts for beach restoration were loud and clear in Quintana Roo's coastal areas. Last summer the announcement was due to the worst of the tropical storm season (typically late August through October) approaching, that better judgment would be to postpone any attempts at beach restoration for 2008.

Prudent judgment indeed, in my opinion given the resources required and the apparent risk.

Now, in April of 2009, they're in delay mode again, pushing any anticipated start date for actual work back to at least early June with a completion likely in September 2009 at best. If once again, they delay due to the impending tropical storm season, they won't be ready, and I use that word loosely until sometime in early 2010.

The question then becomes, will they be ready to go in 2010?

And, at what point does this become some inept charade of government bureaucracy. If the 5-6 reported, presumably qualified, Bidders were all technically flawed, it's likely the bid specifications were unrealistic and/ or the bidders took major exceptions to requirements or assurances in the specifications.

I don't pretend to have the answers but the longer this goes the more damage from adverse publicity Cancun and Playa will take from their beach conditions at a time when they can afford it least.

PR wise, it may have been a great time to announce that Cancun's beaches are back and beautiful.

K.W.- With the millions of dollars at stake, it's hard to tell why the companies didn't meet requirements. There has been so much "blah blah blah" throughout this process, I don't think anyone knows they why's and wherefore's of what's happening!

Steve- True true, I only meant to "cover my $%#$%" in case someone questioned my theories, lol. I think I would rather be a scientist than a politician, numbers and test results don't lie. Though I suppose scientists do. :)

Dangers- Yes, the delays have been going on for quite some time. I think at this point in the season, they've just got to recognize that starting something during the hurricane season is asking for trouble. I agree, it would be some much needed positive PR to have the beaches repaired, but if they don't do it right, the PR could be even worse. Thanks as always for a well thought out and insightful comment!