Today the Canuck clan and a large contingent of Cancunenses took to the streets to march for the rights of animals in Cancun. The event was spearheaded by the incredible Maria Alicia Salgado, the director of RAP Cancun Animal Rescue in an effort to bring awareness to the plight of the thousands of animals that are neglected and abused in our city. One dog in particular has brought the citizens to their feet after a man in SM 41 was caught on tape repeatedly beating his puppy with a chain. Maria Alicia and RAP have been making every legal effort to rescue this poor animal, a 9 month old Labrador named Camila, and yet no action has been taken by the authorities.

Today's event saw babies and grandmas, rich and poor along with their four legged friends stopping traffic and chanting "Queremos Camila" ("We love Camila"), "Justicia por Camila" ("Justice for Camila"), and repeating the words of our mayor's campaign "Hechos, no palabras" ("Actions, not words") as we marched through the streets of Cancun. The march ended at the Palacio Municipal (City Hall) where Maria Alicia made an impassioned speech about the problems faced by all animals but in particular, Camila. The director of public health of Cancun met the demonstrators and tried to make a speech about "process", but no one wanted excuses, they wanted action to be taken NOW to remove Camila from her horrible situation. We left without hearing a resolution, but with the hope that something will be done sooner rather than later, not only to protect Camila, but all animals that are being mistreated in Cancun. Hopefully I will have some good news to report on this matter this week. As one placard read today "Hold on Camila, we're coming for you". 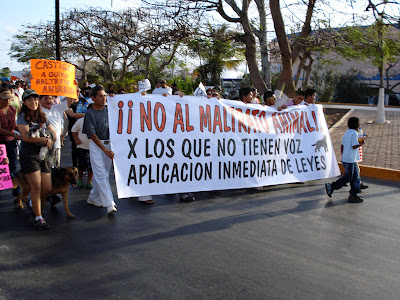 "No to the mistreatment of animals!"
"Those who do not have a voice"
"Immediate application of the laws" 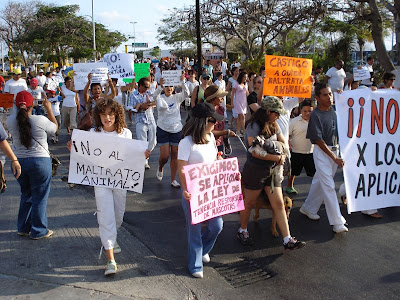 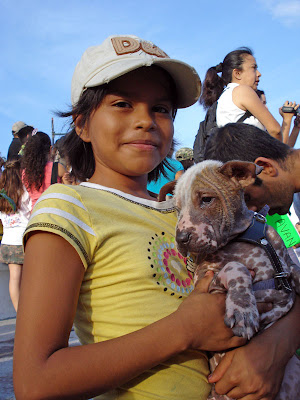 Who would want to harm this adorable creature? 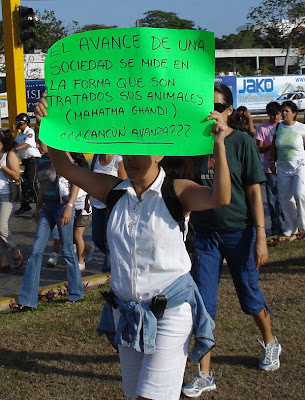 “The greatness of a nation and its moral progress can
be judged by the way its animals are treated”. Mahatma Gandhi 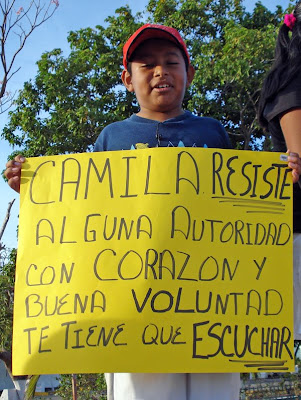 "Hold on Camila, some authority
with heart and good will must listen to you" 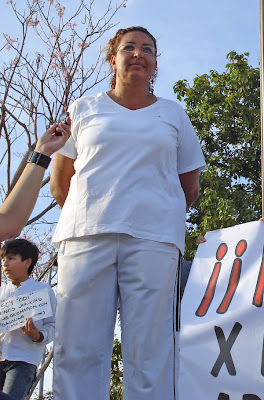 It was a very emotional day, just seeing the crowds of people made my heart swell and my eyes well up. I had mixed emotions and lots of tears, I cried for Camila, I cried for the abused puppy with the broken leg being carried through the march by a nurse, I cried with pride in my fellow Cancunenses who felt so strongly about this issue and cried in shame for the thousands who don't care at all. I am so grateful to Maria Alicia for being such a strong voice for this extremely important issue, thank you to her and to RAP and to everyone who contributed today. Hang on Camila, we are not going to forget about you.

Great Gandhi quote - it does not bode well for Mexico however.

Thanks for the report - the efforts there are encouraging.

Wow, what a great turn out. Hope the demonstration does some good and that Camila goes to a good home.

I can't stand to see or hear about mistreatment of animals. Those who do something so horrible should have the same done to them!

I couldn't even stand to watch the video on RAP. I had to turn it off...

What a great turn-out, and for such an important cause. We plan on making it out to the next one (if there is one).

Pls keep us informed on Camila (if you hear anything)

Excellent idea that Cancun will join the fight for animal rights. Congratulations.

Calypso- Indeed, great quote and a bad indication of where Mexico is at. I was happy to see it on a few signs at the march, at least there is hope. :)

Gaelyn- It was wonderful to see so many people out, sad to know that we needed to do it. Camila is now up for adoption, hopefully she'll find a very loving home.

K.W.- A lot of people agree with you, I heard a lot of chatter about how much pain that man deserved. Camila has now been removed from the hell she was in and I have high hopes for her happy future.

On Mexican Time- Will let you know about future RAP events, they need all the hands and voices they can get! As I mentioned in the previous two comments, Camila has been taken out of that horrible house and is ready for adoption. If you know of anyone who is interested, let me know!

Heather- It was amazing, I sobbed like a baby several times, lol!

Websales- Glad to see that Cancun is ready for some change regarding the treatment of animals!

Your blog made me bawl my head off, I'd have been a mess if I was there. Good job, Cancun!