The first time I heard about the "pez leon" was in this post from Anna, a fellow ex-pat in Mexico blogging in Cozumel. Since her post in April, I have read various reports of lionfish problems in Quintana Roo and today I had my first up close and personal encounter with these deadly reef assassins. 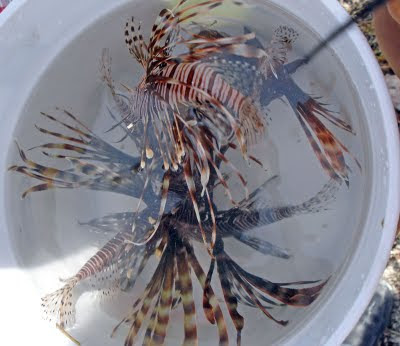 A bucketful of deadly beauty
We were having a lovely day on the beach in Puerto Morelos when we noticed a man going in and out of the water with a net and a bucket. We didn't think too much of it until a news crew showed up to interview the man. (An "only in paradise" news crew in bikini and swim trunks no less). I got my metiche (nosy) nose in the mix and approached to hear the interview and get a peek in the bucket. I saw the most beautiful fish, striped like a tiger with gorgeous wing-like fins. I promptly stepped back when I realized that I was looking at the deadly "pez leon" or lionfish. There were five in the bucket and the man said that there were a "monton" (a whole lot) right off the shore of the beach. The interview drew a crowd (I'm not the only metiche out there) and afterwards there seemed to be fewer people braving the waters on this beautiful Sunday. 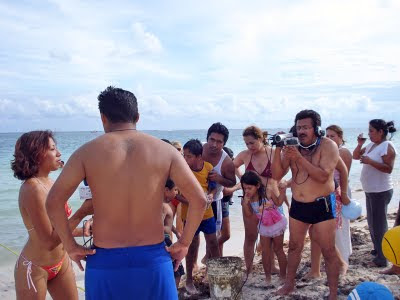 The pez leon is not native to the Mexican Caribbean and is fairly new to this region. The first reports I can find are from the beginning of 2009 when people started to find this predator in the waters near Cozumel. The lionfish is more commonly found in the Indo-Pacific but have shown their ability to adapt to the warmer waters of the Caribbean Sea. There is speculation that the species was released into the Gulf of Mexico after a hurricane hit in Florida in 1992, destroying an aquarium with a few of these creatures and emptying them into the ocean. The lionfish is dangerous as it kills the coral in the reef, preys on other marine life and has poisonous spikes that can do significant damage to humans and could be deadly. The lionfish apparently has no natural enemies in these waters to help control their population and they are reproducing and spreading rapidly.

The CEA in Akumal recommends that divers report any sightings of lionfish but to NOT try to touch or capture this dangerous creature. Several environmental agencies are working together to capture and eradicate the population of lionfish in the hopes of preventing further damage to the reefs and the marine life that make this area home. 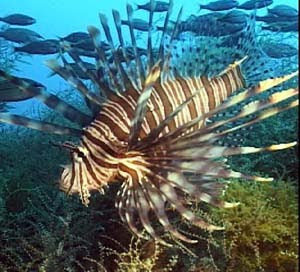 While this all seems dire and serious (and it is for the future of the reefs), I have read NO reports of humans being harmed by the lionfish in Quintana Roo. They tend to keep their distance from divers and snorkelers and do not aggressively attack, but all who enter the waters in Quintana Roo need to be aware of these creatures. Do not approach them and do not touch them, report any sightings to your dive master or snorkel tour leader. If the worst should happen and you should come in contact with the poisonous spines, seek medical help immediately.

We enjoyed the rest of our day at the beach and yes, we did return to the water, perhaps a little more trepidatiously and more aware of might be lurking, but no little fishies were going to scare us off. We'll be back in the waters soon (and keeping an eye out for these gorgeous killers).

eeeeyyyyyyiiiikes! Never would have known - thanks amiga

That is the reason I stay near the edge of the water. All those creatures scare me. Call me chicken!

Interesting how fast these fish are spreading. There might be a vacuum in the reef predator nich that is encouraging their spread. But be assured that they pose no threat to the reef's corals - they eat everything but coral - looking for the easy prey, which is often the sick animals that need to be eliminated to protect the reef's species. As to their threat to humans - very minimal. The drive to the beach is much more dangerous. When I was a fish collector in Micronesia I got nailed a couple times by this species. Not nearly as bad a venom as the Atlantic/Caribbean Stonefish - which has also hit me!

Wait...is the camera man in a near speedo? Oh. joy.

WOW_ They are so amazing beautiful but... no thanks. I do love the news crew. Only here baby!!! I love it.

Looks like I will be seeing you soon with JJ in town!!!

Nice post kelly,, that second pic is a peach with the expressions of the crowd,, perfecto shot,, and the bikini clad reporter ain't shabby either. Saw many of these critters while stationed in Okinawa,, they belong to a family of Nasty Boys,, The lion,zebra,turkey fish( depends where you are) ,scorpion Fish and the bad ass of all, Stone fish ,,we actually kept antivenom in the ER for that one. They are all defensive but don't be fooled, I have seen a Lion Fish travel 8 ft in the blink of an eye,, they are aggressive predators. The scorpion and stone just hang out, hard to see and wait for lunch to be delivered. Thanks again,

KfromMichigan- Chicken! LOL. Those little guys were found right on the edge, not on the reef, that's the scary part! It wasn't far out at all.

Brian- Thanks for the info. The "guarda parque" (like a park ranger for the reef) told me that they did destroy the coral, perhaps he just meant reef though he said "corales". Different websites have different information about the effect of the venom, some say that humans can be paralyzed or killed, others say just a bit of swelling and a burn. I think I'll just avoid them to be sure! Glad to hear you survived your encounter. :)

Sara- Yes, the camera man is in a near speedo, lol! He was directing the reporter in the bikini for some "B roll" shots, getting down and shooting her bikini-clad bottom as she walked away. It was too funny.

Tulum Living- The news crew cracked me up to be honest. Oh fun, I didn't know that you knew JJ!! I'll have to check the date on that again, yikes my memory stinks! Will be great to meet you.

Barry- Always a wealth of information, thanks! Turkey fish? Perfect for Thanksgiving, haha! Gracias for stopping by!

I went diving with Aqua World last November and they asked us to do exactly as you said (spot them and report them to the divemaster). Our whole group found.... one! And it was the DM who spotted it. He brought it back to the and was kind enough to allow me a picture.

The story I heard about their arrival to the Gulf of Mx though (from a dive crew in Belize) is that some rich folks just got fed up with their non-community behavior in their yatch's aquarium, and decided to throw them overboard.