For a long time we've been reading about the Mayor's proposal to build a new city hall in one of the last remaining green areas in Cancun, known as "el ombligo verde" ("the green belly button"). We've been witness to the protests against this action and have seen signs around the neighbourhood asking the Mayor to please stop the destruction of the environment. This green area is about two blocks from where we live, beside the "new"cathedral that has never actually been completed. A few weeks back some astonishing aerial photos appeared revealing that the area had already been stripped, bare earth where once there was jungle, done from the inside out so that it was not obvious that the work was being done. "Officially" there was an order for the work to be halted, but that order has obviously been ignored, we can hear the machinery ripping the place to shreds. I can't believe what they were able to accomplish under the noses of citizens who did not want this to happen, until we saw the photos we had no idea that they had already destroyed the area.

While it seems that protests are futile at this point, we decided to take part in yesterday's "human chain", an effort to surround the green area with people and bring attention to the "ecocide" taking place in our city. A few hundred people came out, with placards and green "belly buttons" painted on foreheads (and various other body parts), even the environmental doggies wore their green paint with pride. I had mixed emotions about the event, I was happy to be a part of an obviously passionate group of people, but saddened by the relatively small number of citizens that turned out. I was able to give Max a little environmental lesson and I was proud that he was a part of the action. He is Cancunense, this is his city too, what's going to be left of it by the time he is an adult?

I could rant and rave about this all day, but where is that going to get me? I think I'll just share some photos of some really great people standing up for what they believe in. 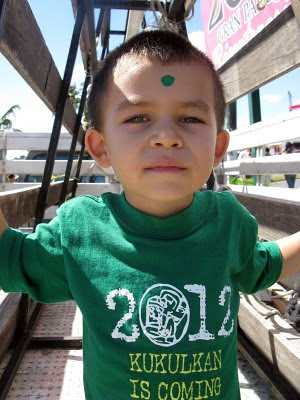 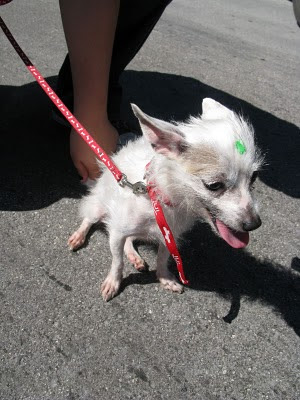 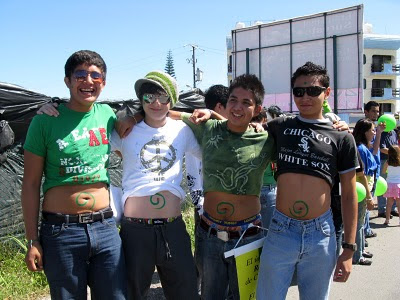 Dude, your belly button is green! 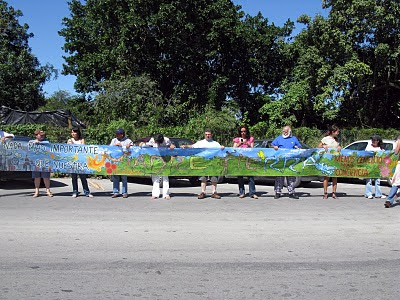 The banner reads:
"Nothing is more important than our Mother Earth. Less cement, more conscience" 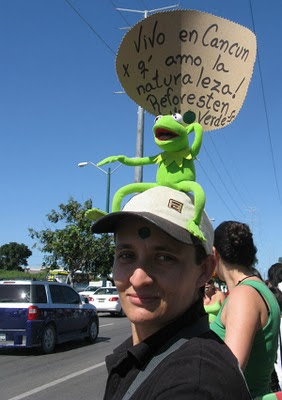 Kermit the Frog was on hand, he says
"I live in Cancun and love nature, reforest our green!" 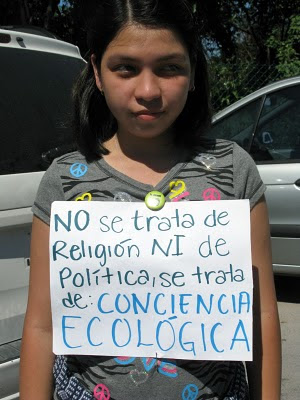 "It's not about religion, nor politics, it's about ecological conscience" 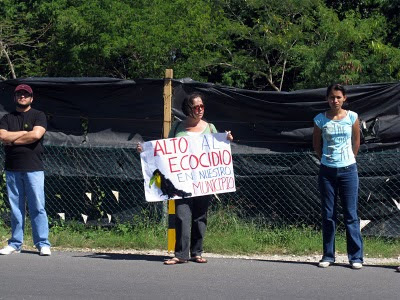 "Halt the ecocide in our municipality" 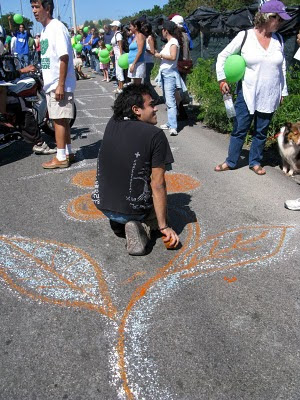 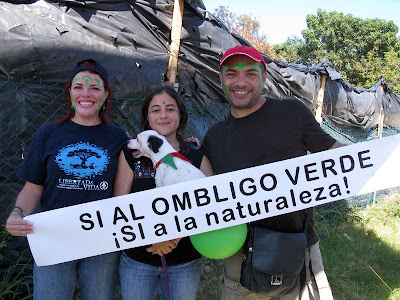 "Yes to the green belly button, yes to nature!"
Thanks to all who came out, thanks to all who have signed petitions and done their part to protect the city. Shame on the government for allowing this to happen, not only destroying our green areas, but doing so in secret and agains the wishes of so many citizens of Cancun. Shame shame shame.
By CancunCanuck - February 08, 2010

I would like to find that area on Google Maps so I can see where it is. Can you give an address or street? Thank

That is so horrible... that there is so little awareness of the environment or how despicable it is to go around the process like that. I personally would have wanted to throw a few tomatoes at the bulldozers...

My dream is for Mexico to become aware of the amazing environment before it is totally gone.

Did you read Steve in Melaque about their lagoon? Nothing is safe, large city or small town.

I was going to ask the same Google Maps question. It's good to see people turning out, no matter how small or how futile the efforts. I know people get worn down by politics, but we can't give up and tune out! You can't fail if you never give up, in my opinion.

Kudos for a mom who's teaching her son to value nature!

A few days before I saw those photos myself, my wise boyfriend had even said to me, "Just watch. They're gonna start from the inside and leave a ring of trees around the outside. You won't even know it happened until it's too late." Truer words were never spoken!

I live near there, too, and it hurts to drive by there every day.

How great that you're teaching your son these great lessons!
Saludos!

Oh wow, that's horrible. I'm so glad you protested even though they had done there thing already. Good for you for bringing your son...keep up the good work. Progress can't happen without people like you.

What I don't get, and probably never will is... Why don't they just rebuild the damn thing? We have MORE than enough disgusting looking buildings that are vacant (or should be) where this could have happened??

Somethings I will never, ever understand.

Great that you went... to be honest I had no idea this was going on.

On Mex Time: I heard rumors that the original Palacio Municipal was sold to someone else, or it was "gifted" because someone owed somebody else money, which is why they don't just rebuild it.

Again, this is just a rumor I heard.

Gringa - thanks!!! I hope they turn it into something pretty! LOL!!

What about all the other disgusting looking buildings around town? Why couldn't they just do something in one of those!! Benefiting all who have to look at them! LOL! Sneaky little....

Kudos to you for showing your son what really matters in this world! It's a shame not many people showed up to support this rally but the important thing is you stood up for what you believe regardless of what others thought.