Argh, I really don't know what's wrong with me lately. I have this huge sense of guilt for not writing for the blog but I can't find motivation for writing! I guess guilt just isn't enough. Since I left my teaching job I have far less time by myself and I think that's a contributing factor to my lack of posting. I used to have 2 to 3 hours a day that were just for me, just for the blog and now I have zero. My "new" job is writing, managing four blogs, 15 Facebook pages and 6 Twitter accounts, I think at the end of my day job I just don't have the "oomph" to keep writing. I need inspiration, I need motivation, I need an assistant, I need a few more hours in the day!

I've realized that there are some psychological factors at play here too. The last few months I have been feeling rather "meh", depressed and just not very excited about anything. No one wants to read a blog full of moans (well, at least I don't think so) so I when I have nothing good to say, I just don't say it. "Poor me, I'm so miserable, blah blah blah", yawn! We haven't been doing many exciting things, not enough adventures in our lives to share with you either. Work, same old, same old, school, same old, same old. I don't go out much at all, don't have much going on at all, how boring is that?

I think the final part of my lack of blogging is a little bit of fear. About six months ago we received some pretty terrifying phone calls, extortion calls from a scary sounding man who provided great detail about the horrible things he would do to us if we didn't pay up. We know that it was a prank, they are just waiting for people to fall for the scam, but it sure put the fear in us and I think I started laying REALLY low because of it. Keep your head down, hold your cards close to your chest and you can deceive yourself into thinking that no one can touch you or your family. Silly really, if something is going to happen, there's not much you can do to stop it. Information I put here on the blog might come back to bite me one day, but I am very careful about sharing anything that might lead someone to our front door. The one thing that is clear, we are poor people, we don't have anything that the bad guys might want (ie, money). Well, I hope that's clear anyway!

So, I guess this is part apology, part explanation, part excuses and part "here's a post finally!". I'll do my best to keep up better, I miss the blog and I miss writing, I just need to put fingers to the keyboard and get rolling. I hope you are all well, take care friends!

Email ThisBlogThis!Share to TwitterShare to FacebookShare to Pinterest
Labels: blogging, life in cancun

This is mostly going to be a picture post, I haven't done one in aeons! Sunday we took my parents to the beach in Puerto Morelos and my dad had a hankering to do some snorkeling. We caught a little panga at a good price and had some of the best snorkeling we've had in a long time. The water was super clear, the sun was shining through and the fish were abundant. Max did the whole two hours with us, his first time really keeping up with a group on a reef snorkel, I was thrilled and so was he! There were moments where I heard him screaming into his tube, thought he was panicking, but he was just pointing out some super cool fish he'd spotted. The conditions were perfect for taking pics, so here you go, some fishies, some coral and a really cool Grandpa/Max shot. 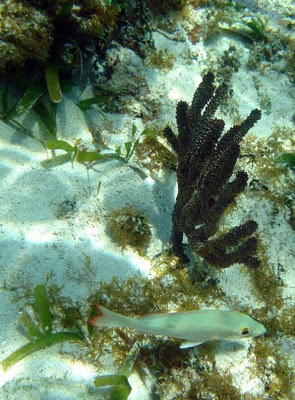 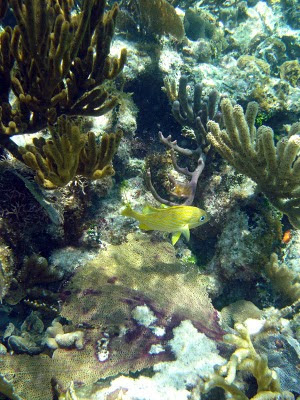 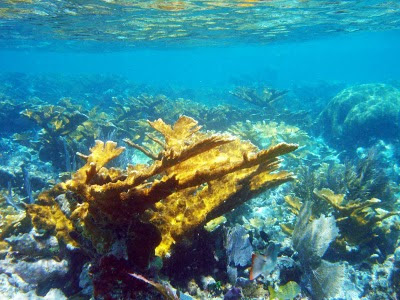 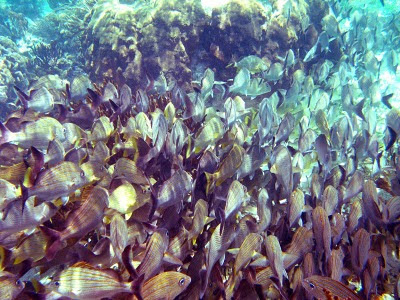 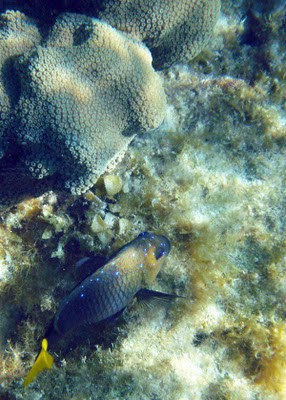 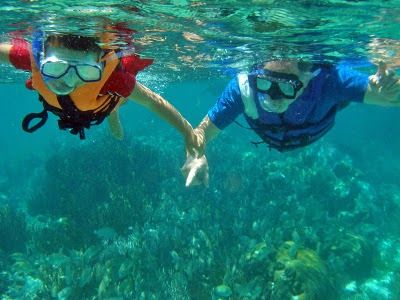 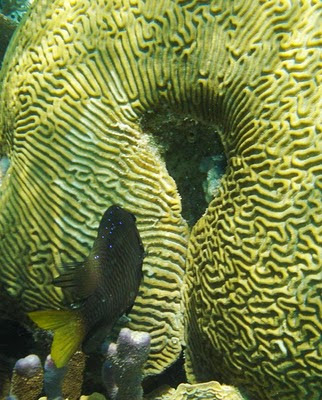 And that's it, just a quickie today but sheesh, two blogs in two days, pretty good for this good-for-nothin' blogger these days! The parents leave tomorrow, back to Canada after three weeks here. We'll miss them greatly and were so pleased to be able to share some fun times with them. Thanks mom and dad, come back soon!
By CancunCanuck - April 13, 2010 11 comments: 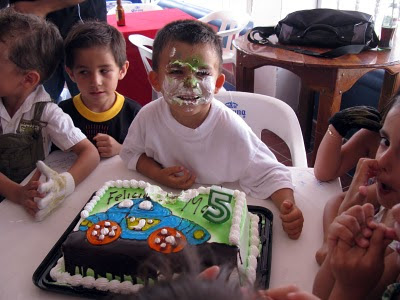 Five years ago at this very moment I was having a freaking-out, full-fledged panic attack in the hospital preparing for my life to change. Vomiting from nervousness, asking for more meds and screaming at Hubby to put down the damned video camera. I won't bore you with the details of Max's birth (which at times felt more like an alien abduction), suffice it to say that he arrived safely around 10 am on April 12, 2005 and nothing has been the same since.
It feels very strange to have a five year old boy, I feel like I need to stop calling him "my baby". He's fiercely independent, thinks he needs to start shaving and talks about his plans to get married and kiss his wife on the mouth. I take pride in the moments where he seems so grown up, but I still prefer the times where he is super-tired and I can get him to snuggle up with me on the couch for some cuddles. Those moments are hard to come by, he's a ball of energy and sitting still is not on his agenda, so I suck them up when I can get them. Watching him read, snorkel the reefs and cenotes, helping around the house and tearing up the streets on his tricycle, I am overwhelmed sometimes at what a cool kid I've got. He's kind to animals and the planet, he's generous and loving, he's a good friend and a great kid. Yeah, he can cause trouble, but isn't that part of a five year old's job? 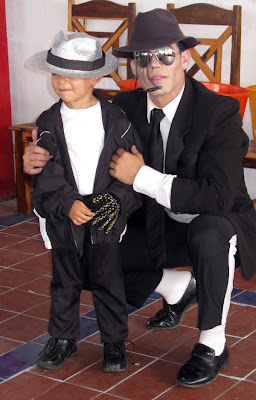 We celebrated Max's birthday in grand style on the weekend, a huge party with lots of food, friends and a Michael Jackson impersonator. The kids were chanting "Michael, Michael, Michael" for 20 minutes before the guy came out! Max had his MJ costume and performed his own wee version of the Michael spin, the moon walk and of course (to my chagrin), the crotch grab. I hope everyone enjoyed the party as much as we did (cause it's the last one for a few years, I told Max every birthday that starts with a "5" gets a party). Thanks to all who attended, see you in 45 years! 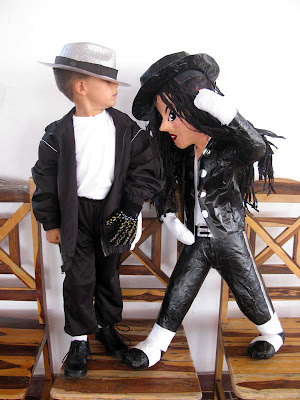 So happy birthday to my baby boy, my big boy, my young man. You truly are my "PYT", I love you though at times you are "Bad", please stay away from things that are "Dangerous", tell all the "Smooth Criminals" to just "Beat It", know that "You Are Not Alone" and that "I Just Can't Stop Loving You". (Readers, please forgive me for that, I just couldn't "Say, Say, Say" what I needed to say without getting all MJ goofy).
I love you baby, SWAK.
By CancunCanuck - April 12, 2010 11 comments:

Wow, time sure flies when you are having fun, I can't believe how long it's been since I blogged! My parents arrived from Canada last week and we've been running around like crazy! We managed to take last weekend off for a relaxing trip to Isla Mujeres, my parents favourite place in the area. We stayed at Posada del Mar which was lovely, great location on the main strip across from the beach and close to restaurants and shops. Max was beyond thrilled with the pool, it was hard to get him out of the water to do anything else.

We rented a golf cart one day and I gave my folks the quickie tour of Isla. I told them "chatter" cost extra but they chose the bargain route, too bad, they missed out on my corny jokes. We visited the turtle farm, saw the floating house, Punta Sur (wow, big changes there, they've finally added a safety wall and a covered seating area), checked out the shell house and ran all over town. The highlight was definitely our stop at Garrafon de Castilla, the small beach club next to the famous Garrafon Park. We didn't even need our snorkels to see the thousands of fish right off shore! We bought some fish food and man oh man, we were surrounded by the little yellow and black striped sergeant majors eating right out of our hands. Garrafon de Castilla is a bargain, only 50 pesos entrance for some fantastic views and great snorkeling fun!

We spent Sunday lazing around on Playa Norte, Max and Grandpa flew their kite, I got pinched on the foot by a crab and my mom and dad got a nice sunburn to memorialize the weekend. Dragging Max out of the ocean to head home was a horror, the kid thought that we could just live on the beach forever and ever. He fell asleep almost immediately on the ferry ride back home, I guess sunshine and snorkel can really tucker a kid out. Tuckered out mom and grandparents too!

Here are a few snaps of our Isla Mujeres getaway..... 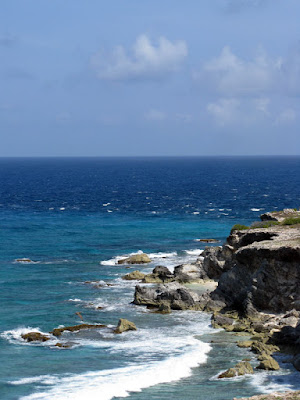 Punta Sur (this view never ceases to amaze me) 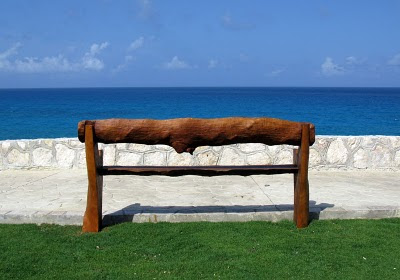 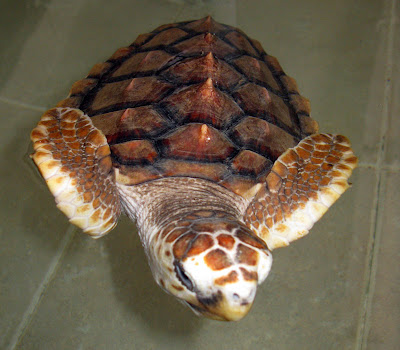 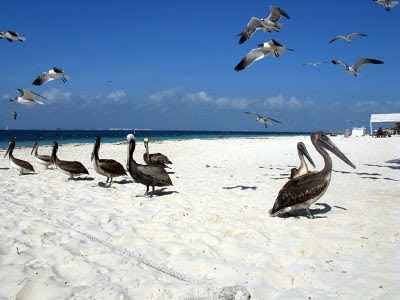 Pelicans waiting for a free meal from the fishermen 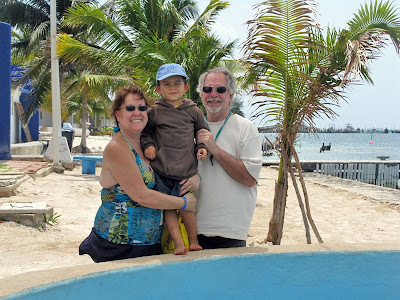 Grandma, Max and Grandpa at the turtle farm

We're so fortunate to have my folks here for three whole weeks! Max is on vacation from school for Semana Santa so they are having a ball with him all day long. We're hoping to get out of town again this weekend, Tulum is on our minds, just waiting to hear back from a hotel to see if we can get a reservation, it's a busy busy time of year! I promise to update sooner rather than later, I've been so distracted and having so much fun, sorry for my absence. Hope all my lovely readers are well, saludos de Cancun!
By CancunCanuck - April 01, 2010 8 comments: