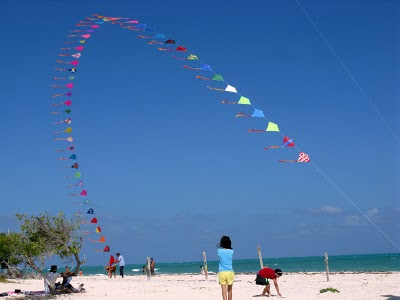 I grew up with a father who loved kites. I mean LOOOVED kites. He'd build them, buy them and fly them, I learned a lot about aerodynamics and science from my afternoons in the field with dad. Last week I saw a post on my favourite Cancun forum about an upcoming kite event on Isla Blanca and I got all giddy inside. The weekend rolled around with some phenomenal weather (and I do mean phenomenal, perfect, ideal, outstanding, g-g-g-gorgeous weather) and we headed out for the untouched zone of Isla Blanca.
Isla Blanca used to be a regular stop for us. We'd visit frequently, enjoying the lack of resorts and tourists (no offense), the pretty beaches and rustic piers and relative quiet. Then we had a couple of not so fun experiences and found ourselves on southern beaches instead. I was ready to forgive (can you forgive a beach?) and forget and enjoy the day of "papalotes" (kites). 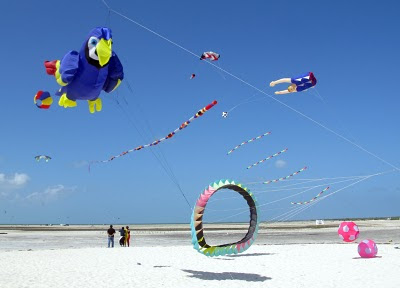 Down the long and winding road (thanks Beatles), we weaved our way through bougainvillea-lined paths and jungle groves, ending up on the sandy lane in the middle of nowhere. We learned years ago not to try to park too close to the beach, no need to go hunting up ten guys to dig us out again. We loaded up with the requisite gear and trudged up to the site of the kites. The wind was up, the sun was shining and some of the most amazing kites I have ever seen were soaring in the sky! Max got hooked up with his kite and off he went. 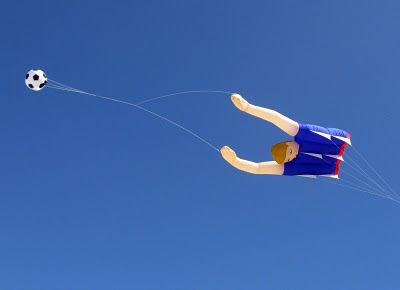 The other little kids were something special, they had all come from the children's home/orphanage called "La Casita". This day was really for them, the group "Let's Fly Kites" had come down with their bags full of goodies for these beautiful children and worked together with "Give a Toy, Get a Smile" to give these kids a memorable day. The smiles on those little faces brightened my day and my cockles were warmed by the generosity and kindness of the folks who had put it all together. Sometimes it's easy to forget that there are some GOOD PEOPLE in this world, good people who go out of their way to do good things. Yesterday was a great reminder. 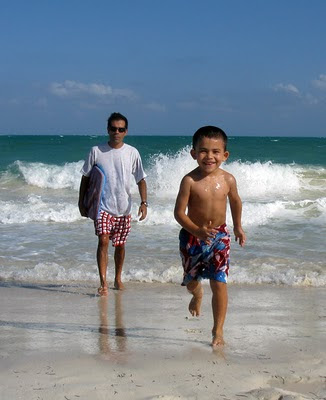 I had expected a fun day of flying kites on the beach, I did not expect life lessons (but do we ever really expect them?) I got my reminder to smile, that there are still decent, caring folk out there and the world is not all bullying/hatred/bigotry/greedy/self-centred bullshit. Max got another lesson in "you're a lucky little kid you know, you've got a mommy/daddy/house/food". We met some lovely people, saw some gorgeous kites, and got our fill of fresh air and sunshine. Overall, I would say it was a pretty darned successful day. 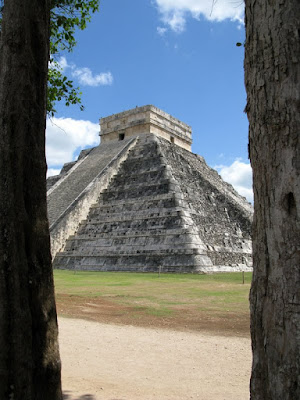 Last week when the boss asked me to visit Chichen Itza yet again, I must admit my first reaction was a big heavy sigh. Don't get me wrong, I love adventures and new things, but Chichen is not a "new" thing to me, been there, done that, got the t-shirt (literally). It's a long trip and with my "blues", it just seemed a daunting task. I promptly gave myself a giant kick in the ass for being such an ungrateful lump and forced a "hurrah!", reminding myself that when one is down, one must do something, anything to bring one's self up again.
Saturday dawned and I was up and out the door before the roosters crowed. (Ok, no roosters in my hood, but you get the point, too damned early). I met up with the gang from the office for the "fam trip" (for those not in the tourism industry, a "fam trip" means "familiarization", tour providers showing off their wares to those of us who will be selling them). We hopped on the luxury bus and settled in for the long drive. I perked myself up with a few coffees and enjoyed the chat from my absolute favourite guide, Delio. He was my guide at Chichen twice before and once at Tulum, he knows his stuff inside and out and shares history with a light touch and a passion that makes "old rocks" fascinating. 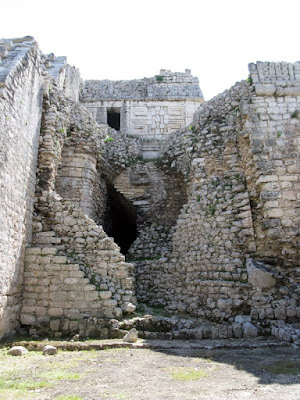 The Nunnery
Now, this is a personal blog that sometimes resembles a travel blog, but since I'll be giving the "sales pitch" blog for work, I figure I'll just keep this personal. Don't worry, no long winded rambles about the mathematics of the site or the ancient history, just my own personal reflections based on a number of visits. 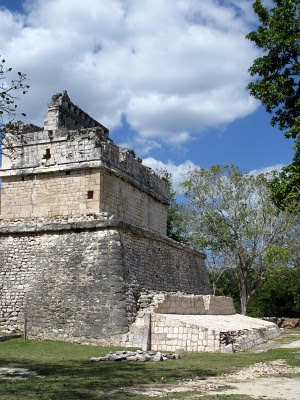 The "new" ball court under reconstruction
At the risk of sounding "hippy dippy", I find the place magical. Mysterious. A feeling deep inside my gut that I am standing on the sacred ground. When my feet hit the site, I feel a surge of power inside. (Are we feeling hippy dippy yet?) I've read complaints from tourists about the vendors on the site, but honestly, I really don't even notice them, my attention is totally on the experience of being in the same place where thousands walked thousands of years ago. The tale of the Spanish coming and destroying the site breaks my heart and can almost bring me to tears. I can only imagine how the Maya felt when their lives were ripped from them and their treasures carted away. I can hear the cheers when I am in the ball court and the speeches of the kings when in front of the pyramid. I don't feel sadness when next to the Sacred Cenote where innocents were sacrificed, I feel their great pride in doing what they felt best for their people. I simply feel the power deep down in the soil, an energy that is hard to describe. (Oh yeah, we're deep in hippy dippylandia now). 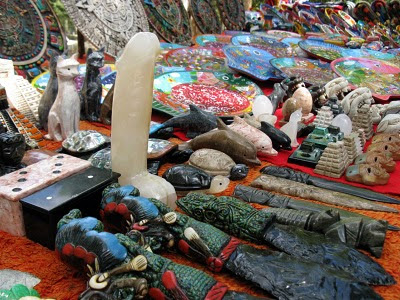 Honey? What's the best Chichen souvenir?
Ceremonial knife, colourful plate or giant penis?
I have my favourite places within Chichen Itza. The Nunnery with its gaping hole left by an explorer and his dynamite as he searched for treasure. The Church with its intricate and amazingly detailed carvings. The Skull Rack and its rows and rows of severed heads representing the winners of the ball game who were sacrificed to the gods. The "new" ball court which is under reconstruction and changes each time I see it. The Observatory and the incredibly advanced minds it represents. 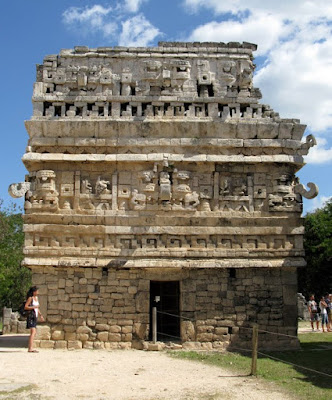 The beautiful "church" with its incredible carvings
And so I passed my day, though unfortunately the time at Chichen Itza was too short. We made a stop in Vallodolid to visit the convent (lightning did not strike me down, my heathen soul was spared), a divine Yucatecan lunch and a quick stop at Cenote Zaci. Then back on the bus for the long drive home, ending my fourteen hour day back in the bright lights, big city of Cancun. I'm hoping to return to Chichen Itza for the spring equinox in March, I'd love to witness the serpent of light descending the pyramid and have time to properly roam the grounds on my own. I was glad to be reminded that no matter how many times I visit, Chichen Itza still has magic to share and I look forward to that hippy dippy feeling again.
By CancunCanuck - February 22, 2011 12 comments:

Is it Primary School or Harvard? 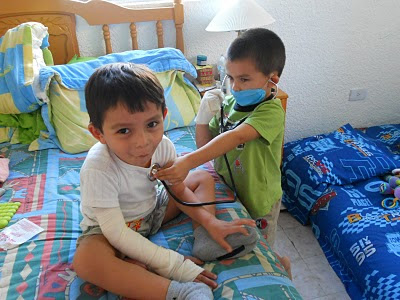 Is there a doctor in the house? Max with his buddy Basilio
I've got little butterflies in my tummy today. Nervous mommy butterflies. Max's current school is only a kinder, after this year he needs to change schools to enter primary, movin' on up to the big time. We dropped him off this morning at the primary school that we love to have his entrance exam and evaluation. Yes, an entrance exam for primary school. Last night I grilled the poor kid on questions I thought they may ask him, gave him "extra" homework to practice his writing and tricked him into some math practice with some online games. I don't know why I am so worked up, it's not like he's taking the SATs to get into Harvard Law.
I think I am really stressed about the "pre-first" or "first grade" deal. Most schools here put kids right into first grade after kinder three, when they are six years old (Max turns six in April). This particular school wants all six year olds to do a pre-first year to prepare them for first grade. The director explained that many kids do not have the level of English or the maturity to enter first. Max certainly has no problem with the English, we'll see how he fares on the maturity level, though this proud mommy thinks he'll do just fine in that regard. The directors and teachers of his current school and his psychologist think that pre-first would be bad for Max, when he's bored, he starts acting up and they believe he would be bored.
Currently Max is top of his class. The director told me last week that he is "ganando todos los demas" (beating all the others). He got a perfect score on his math exam (blew my mind and made me cry), adding and subtracting three digit numbers, counting by 2's, 5's and 10's, counting money (pesos and dollars), and adding fractions! His other exams were all "excelente", just one or two mistakes here and there. He's completely frustrated with his English teacher's mistakes, he speaks better than she does and has to correct her in class. (She didn't take well to this at first, punishing him when he told her she was wrong, but I put a quick stop to that). He reads and writes in both languages, grasps French quickly and overall is a pretty smart kid. For Valentine's Day he must have written 14 letters of love to his teachers, all of his own accord, for "fun" and because he loves them. Now, he's not a perfect kid by any means, problems arise when he understands concepts quickly and his fellow students do not, he gets mouthy and antsy and starts climbing the walls (and spouting bad words, ugh). Sadly, he loves his punishment which is being sent to the "baby room", where he says he helps by giving bottles and putting the munchkins to sleep. I think what he really needs is a dungeon full of monsters, that would straighten him up a bit.
So, I have no idea what to expect when I pick him up this afternoon. Will they say he is a gem of a child and a genius and they'd love to have him or will they throw him at me and run for their lives asking us never to return? Is he destined to be a doctor or will he be selling chicles on street corners? (I'm really hoping he goes into plastic surgery, gawd knows I could use a little work and the big bucks wouldn't hurt either). Yeah yeah, he's five, it's primary school, not graduate school, but mommies worry, right? Who's going to take care of me in my old age? Who's going to lift and tighten all my loose bits? Come on universe, make this a good Max day, I'm pretty sure that the chicle business won't pay for my adult diapers......
By CancunCanuck - February 17, 2011 10 comments: