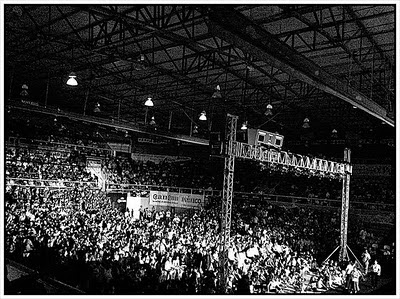 Not your typical ballet venue. Not a good ballet venue.
I am seething. Livid. Really really angry. I don't usually vent and I don't usually let things fester, I am "Little Mary Sunshine" after all, finding the positive in just about any situation but I am ticked to the max! Last night was supposed to be a beautiful cultural event, the National Ballet of Cuba came to Cancun to perform "Swan Lake". You may or may not know that I grew up dancing, 24 years of training including going to university for Fine Arts Dance. It was my life, my love and my passion. When I learned that the ballet was coming to town I could not wait to share it with Max!

Max and I talked about the story of Swan Lake, discussed proper behaviour in a theater and I gave him an idea of the beauty that he was going to witness. I told him about how ballet dancers train and some of the moves he would see. All was well, we left early in order to get there early and peruse the program and get settled.

From this point on, disaster. The event was taking place at the Poliforum, a fifteen minute drive from my house. Normally a fifteen minute drive. We got on the access road to the highway and stopped. Dead. Not moving. I thought it might just be a short delay, but two hours later I discovered how wrong I was. TWO. HOURS. Stopped on the highway with a five year old in the back seat watching the clock, starting to cry when it was time for the ballet to start and we were still stuck in traffic. Normally when I embark on a fifteen minute drive, I don't think about bringing supplies. A two hour drive I would have brought a bottle of water and some cookies, a game for Max, a book or two. Two hours normally gets me to Tulum, not around the corner.
When we finally made it up to where the Poliforum was, we saw the police (and the army), they had decided that it was a great time and place to set up a road block. Gee, 6000 people going to an event, you would think they would try to assist traffic, not make it worse. We got onto the access road to the Poliforum and were stopped. Again. Cars were coming out the other way telling us that there was no place to park and they were leaving. I couldn't turn around so just kept following the bumper in front of me. When we got almost to the end, some enterprising fellows from the lot next door opened up their gate and started charging people to park. I paid, we walked the distance to the stadium and made our way in. We had left the house at 5:45 and it was now 7:45. Show was supposed to start at 7. I HATE being late for artistic performances, but at least I wasn't alone. Hundreds of others were coming in at the same time.
When we got in there were no ushers, no staff to tell us where to go, nobody checked our tickets. We finally asked a cop where to go and he shrugged in a general direction. There were no programs to be found anywhere (I love theater programs!) We found our way to the general area "C" only to discover there were no seats. We hung out on the stairs, behind a railing, behind a piece of scenery, watching ballet-slippered feet go by and seeing the occasional butt in tights. That lasted about ten minutes before they called for an intermission. We desperately tried to get a bottle of water, but the chaos at the concessions pushed us back (well, people pushed us) and we had to get back to our "seats" without any refreshments. The highlight was the bathroom line moved quickly and the toilet paper guy smiled. 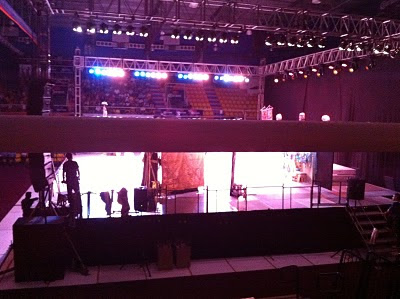 Our view of the stage
I scooted around section "C" looking for anywhere with a better view and again settled on the stairs, behind a light stand and speaker, directly to the side of the stage. Ballet (at least classical ballet) is choreographed to be seen from the front, it's not theater in the round. So, I saw a lot of nothing, got a sore butt on the concrete steps and when Max finally said "Mommy I want to go" at 9:00, I was more than happy to leave. We saw maybe 1/2 hour of dance (from the side between the light poles) and the dancers appeared to be good (it was kind of hard to tell from where we were).
One of my biggest complaints about living in Cancun is the lack of culture. Here we had a perfect opportunity to experience something wonderful, but due to poor organization and the rotten design of the Poliforum, it was a train wreck. I think the city should be truly ashamed. It was embarrassing. A friend is telling me that my expectations were too high, but really, I had tickets to see the ballet, I expected to see the ballet, I don't think that's asking for too much!
Ok, taking my rage elsewhere, thanks for reading my vent (if you got this far)......
By CancunCanuck - March 17, 2011

How very shameful for Cancun to say the least. I, too,miss being able to go to the theatre etc. We hadn't even heard about the ballet coming to Cancun and often only hear about such events until the day after.Sorry you had such a terrible experience!

WOW what a terrible experience for you and Max. Hope the make a return trip (to a different location).

Rotten luck. But somewhat predictable. When venues offer cultural events where they usually do not occur, there are almost always logistical nightmares. I have been fortunate that the group in Manzanillo that sponsors cultural events usually books them into a hotel ballroom. At least, the size can be managed.

I thought it was going to be a blog about Black Swan which I recently saw and was curious as to your take on it... when I read the entry, I was horrorized by the sheer madness of your experience. Somehow it ties in with Black Swan after all - and if you haven't seen it, I hope you get to, though not with Max.

Ashlie- There is a lack of information about community events here (and a lack of events really!) I'm still bummed about the ballet, I really wanted to share something special with Max. :S

KfromMichigan- I have my doubts about a return visit, I think we may have to travel to Merida to find some "real" culture. (I miss the Fox Theater!!!)

Steve- The sad thing is that the Poliforum was JUST built in order to handle events of this size, it's about a year or two old! They just designed the entrance and parking (and other things) oh so badly. It has a capacity for 6000 people, unfortunately they didn't think a lot of things through. :S

minshap- Oh how I wish I could see adult movies! I should say "grown up" movies I guess, haha. I need to take a breath, I am still mad, I feel like a wonderful night with my son was stolen from me. I put on my best face and he was a great kid, but it was truly heartbreaking for me. :S

Your last photo says it all....

Poor organization is just a way of life here in EVERY aspect. It's very frustrating, isn't it??

They are performing in Cozumel tonight and I am excited to see them. Hope it will be less of a disaster here!

I hate to rub salt into the wounds but it was an awesome performance. We got there 1 hour early, parked 5 mins walk away and got fantastic seats. Next time it may be easier to make the trek to Coz!!!

ElleCancun- Frustration is a daily part of life unfortunately, lol!

Anna- So glad that you enjoyed the performance, next time I'll have to come to Coz! (I'm due for a Coz trip anyway, been too long!)