Hurricane Rina has now been downgraded to Tropical Storm Rina, great news for the Yucatan Peninsula. The storm is located about 145 km south of Cozumel island and is moving at a pace of 9 km/h to the north-northwest with winds about 110 km/h, with gusts up to 139 km/h. The alert from the government of the state is still at "orange" level for most of the state, indicating the danger of tropical storm force winds today.

While the disintegration from hurricane to tropical storm is a very good thing, this does not mean that the population should let their guard down. A tropical storm will still bring heavy rains and strong winds and those along the coast must be extremely aware of the danger of a storm surge. We expect heavy flooding in the region today and tomorrow as Tropical Storm Rina passes through. 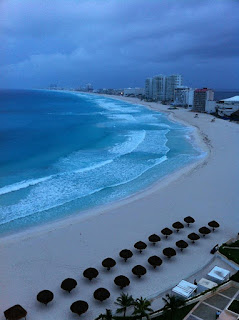 This morning in Cancun's hotel zone
(thanks again to Diane for the photo!)

Currently in Cancun it is cloudy with some minor rain and very little wind (downtown at least, have not been out to the hotel zone). The feeling here among many is "What a let down!", not to indicate that anyone wished for damages or anything serious, but after so much build up, it's like beating away at a piñata only to have it break and have no candy fall out.


I did an interview with Tom Walters of CTV National News in Canada that aired last night, you can see the video above. Gosh I sound so Canadian, eh? "Tooona". I will never live that down.
I will post any updates as things change and we start to feel the storm's effects. Hoping that we won't lose electricity or internet connections. Follow me on Twitter, Facebook and Google Plus.
By CancunCanuck - October 27, 2011

Yes, you did sound really Canadian! Mimi and I watched you last night (we have Shaw satellite TV from Canada) and that was my first comment, "I don't remember Kelly sounding so Canadian". I wonder if it was the influence of speaking to another Canadian and knowing it was going to be shown in Canada? At least you got the beer comment in!! That was cool. You're looking good my friend in your storm boots! A star is born.

Great Job! You also got quoted in USA Today. Enjoy the traffic :-)

Jonna, I will forever live with the horror of that word "tooona", "toooona", going to haunt me, haha! :D

Alex, thanks, glad you saw the article. Traffic has been good the last few days :)

Kelly, "tooona" makes you sound like a Western Canadian. That's how we say it out here. I thought Tom's "Tyuna" was odd. Loved your beer comment...lol.