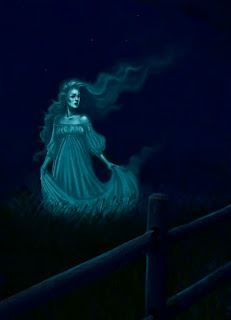 "Mis hijooooos, mis hijoooooos!" the ghostly voice travels through the night sky under the full moon, bringing terror into the hearts of children across Mexico. The cry of "my children, my children" is the lament of "La Llorona" or "The Crying Woman", an ancient tale famous in Mexico and Latin America, told for centuries in a myriad of variations. As we approach the end of October and the "Day of the Dead" and Halloween, it seems an appropriately scary story to share.

Habia una vez...ahem...Once upon a time, there was a very beautiful woman named Maria living in a small town in Mexico. She was beautiful, but she was also arrogant, and was determined not to marry a man from the pueblo, but a man of stature, good looks and wealth. One day a handsome wanderer arrived in the town and Maria set her mind to making him her husband. She used her feminine wiles, knowing that in ignoring the man she would make him hers. The man fell for Maria and asked her to be his, they married and she bore him two children. The man eventually returned to his wandering ways, rejecting Maria and leaving town. Maria became distraught and blaming the children for the loss of her husband, she tossed them into the river to their death. Upon seeing what she had done and realizing her mistake, Maria threw herself in the river after them. After that day, the villagers would hear her cries on the nights of the full moon, "my childreeeeen, my childreeeeeen" as the ghost of Maria searched for the souls of her lost niños.

This is only one variation of many and the origin of the story goes back centuries. One theory is that the tale is based on the history of La Malinche and Cortes, the Spanish conqueror. La Malinche was born to a noble Aztec family in 1505, but was sold into slavery to the Mayans. Cortes, who came from Spain to conquer Mexico,  used La Malinche as an interpreter for her abilities to speak Nahautl and Mayan, and she became his lover, bearing him twin boys. Cortes later decides to return to Spain, announcing his decision to leave La Malinche and take his children with him. La Malinche realizes that she has betrayed her people in helping Cortes in his massacres and calls upon her gods for help. One of these gods tells her that if she allows Cortes to leave with her children, one of them will return and destroy her people. She brings her children to a lake near Mexico City, stabs them with a dagger and throws them in the water, crying out "Mis hijos, mis hijos!" After the death of La Malinche, her ghost is seen on the shores of the lake and her cries are heard for her missing children, giving her the name "La Llorona", "The Crying Woman". (There is no evidence that this tale is true or that La Malinche killed her children, though her role in the conquest is truth).

The story has been told to children for centuries, as a warning for them to behave or "La Llorona will come to take you". Movies have been made of the story, plays are performed every year for the "Day of the Dead" and there is a famous song by Chavela Vargas, "La Llorona", about a heart-broken person begging the Crying Woman to take them to the river. This month a new animated movie, "La Leyenda de La Llorona" was released in Mexico, an adventure story set in Xochimilco following the adventures of children seeking the Crying Woman. I was delighted to take my son to the theater and see it full of families, a thrill to see support for a Mexican-made movie (and a testament to the popularity of the story). This is a vital piece of Mexican culture, I love the legends and love sharing them with my MexiCanadian. If you get a chance, please go see this movie and support the Mexican film industry! And this Halloween or Day of the Dead, share the tale with your children (use your spookiest voice please!)

Marca País – Imagen de México, is a joint public and private sector initiative designed to help promote Mexico as a global business partner and an unrivaled tourist destination. This program is designed to shine a light on the Mexico that its people experience every day.

Disclosure: I am being compensated for my work in creating and managing content as a Contribtor for the México Today Program.All stories, opinions and passion for all things México shared here are completely my own
By CancunCanuck - October 27, 2011