"You must come to a wedding with me in Valladolid".
"Is that an invitation?"
"No, it's a command, you ARE coming with me".
And so went the conversation a few months back with one of my dearest friends. Her husband is from a small village in the Yucatan and his sister was getting married and apparently it was imperative that I attend. Fun! Road trip with a bestie, explore the village of Chichimilá, a weekend in Valladolid and my first Mexican/Mayan wedding? Of course I was in! 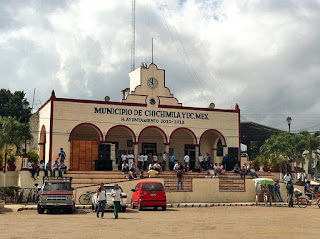 City Hall Chichimilá
I had been to the colonial town of Valladolid once before for a quick visit, but I had not been to the nearby village of Chichimilá. I was tickled to discover that the name Chichimilá means "ver pezón duro", yes, "look at the hard nipple".  (Really, you can't make this stuff up my friends). 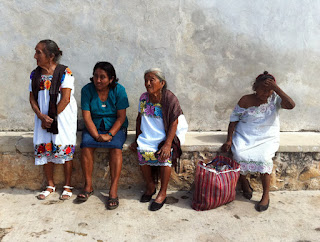 The wise women of Chichimilá
We set off on the free road a few hours later than expected, driving into the setting sun. It's a couple of hours to Valladolid from Cancun, driving through the jungle and passing villages that flash by in two seconds flat. We stopped for some dinner on the way and had the worst tamales ever made, I have never had a tamal break a fork before and I'm pretty sure there was a feather in mine. We arrived in Valladolid after dark and made our way to the hotel. My travel buddies left me to go to the village to see their family and I explored the zocalo and soaked in the laid back vibe. The square was lit up with pretty pink lights and the imposing cathedral was the backdrop for a beautiful night. 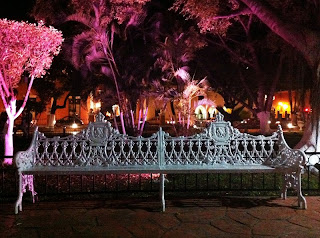 Pretty spot in the Valladolid zocalo 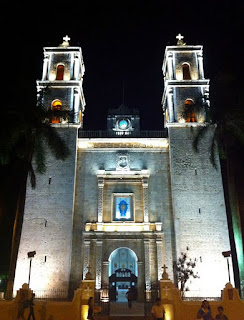 Cathedral, every Colonial town's gotta have one

The next day was wedding day, up and at'em early, dressed up pretty and ready for romance. In true Mexican style, everything ran late but ni modo, we were going with the flow. The village of Chichimilá is about 5 kms from Valladolid and we made it there in record time with the brother of the bride behind the wheel. I really had no idea what to expect from the wedding, but it turned out to be not much different than any other wedding I had been to. It was a typical Catholic church wedding, sweet little flower girls, the priest repeating the words that have been said a million times. Village people wandered in and out of the service, some guests were dressed to the nines, others were in jeans and chanklas, most of the women wearing the traditional huipiles. Babies cried and old ladies fanned themselves in the heat and my non-religious self was glad to not get struck by lightning for being in a church. The bride was beautiful, the groom was nervous and then they were tied together for life. Literally, ropes were put round both their necks to join them (the somewhat cynical side of me snickered at the image of marriage being like a noose). 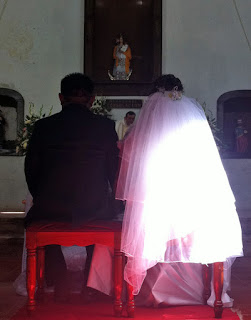 Blessed by a ray of sun 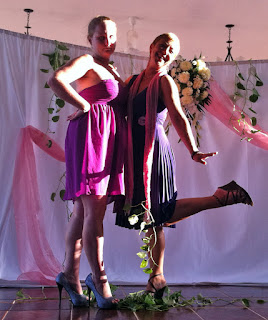 Kicking up our heels at the reception

The rest of the day was spent celebrating at the reception. The bride's mother made delicious food, a LOT of beer was drunk and we danced to cumbia music all night long. The groomsmen carried the groom away and came back with all his clothes and the bride had to go and dress him again. The bride threw the bouquet and I deftly ducked out of the way to avoid it. There was a delicious lack of speeches and pomp, a few quick words (and I mean QUICK) from the bride's brother and bam, back to the party. Late that night we had a few after party tacos in Valladolid then some serious z's after a long day. 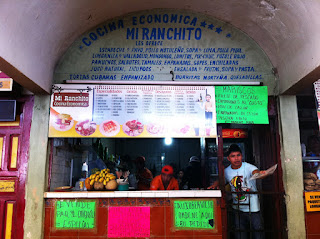 The next day we went on the hunt for breakfast, not an easy task when the town is packed for a parade celebrating the revolution. We had bad luck once again with food, slow service and nasty food from a hole in the wall across from the zocalo. Bestie's husband was staying in the village and we were taking the express bus back to Cancun, at least that was the plan. Of course, being on Mexican time (and the running theme of the weekend was "late"), the bus was missed and we found ourselves on the second class chicken bus all the way home. All just part of the ride. It was an exhausting weekend, lots of laughs, good food, horrid food and a taste of the laid back Yucatan life.
By CancunCanuck - December 14, 2011

A feather in your tamale? That definitely counts as the WORST tamale ever! Gorgeous photos of the wedding and the women in their traditional clothing

Thanks Michele! Yes, feather in the tamal that almost broke my tooth (and DID break the fork). I guess it's more interesting and a better story than "good tamales". :D

my worst tamal was in Nayarit, a shrimp tamal with head, tail and shell encasing the shrimp inside the tamal. UGH.

Chichimilá means 'agua donde está el chechen' - 'water where the chechen is at' i think the mistake comes from chichi=breast and milá=mirar, but we now those arent mayan words. Your friends did came up with that.

You know me, I couldn't stop here. So, my mayan speaking friend told me this:

"Chichimilá to me sounds like a Castellanización (dont know how to say it in english) of Chechem il Há, literally "water where the chechem is at" like Tizimín, is a Castellanización of ti'tsimín. So, to me, the nipple thing doesn't sound right"

There. Also, wikipedia can be edited.

Yes, the Wiki can be edited, but I was going by the .gob.mx site and my friends that live there. :P

Agree that it's a possibility that both are correct...it's Xmas after all!

One of the principle draws for the individuals who make Yucatan their house is the frontier appeal that the zone offers. Other than the likelihood of owning a delightful pilgrim home, there are numerous close-by frontier jewels to find. http://www.mordocrosswords.com/2016/03/yucatan-year.html