Ek Balam Archaeological Site- It's NOT A RUIN! 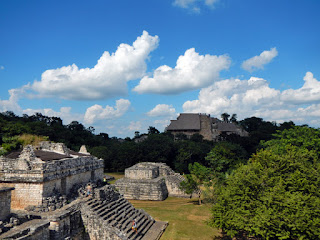 I've become really adverse to the term "ruins". I don't use it, I don't like it, it's just so...ugly. When I visit an archaeological site I see beauty, incredible architecture that has survived for hundreds and sometimes thousands of years, not the destruction that the word "ruin" implies. The Kukulkán Pyramid at Chichén Itzá is hardly a pile of rubble, nor are the stunning structures of Uxmal, Cobá, Tulum and so many others that rise from the Yucatan jungle in testament to their hearty Maya construction and ingenuity. 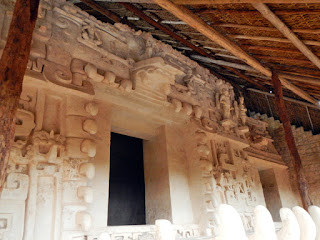 The site of Ek Balam is one of the best examples of my "Not a Ruin!!" obsession. The stunningly well-preserved buildings look more like Hollywood movie sets than post-Apocalyptic ruins. (Let's not get into the impending "apocalypse" debate of Dec. 21, m'kay?) I visited Ek Balam for the first time recently and while the phrase may be overused in travel writing, I must say it was "breathtaking". Literally. Seriously, I was left feeling winded when I first viewed the immaculate facade of the Acropolis. It may have been the thousands (yep, I'm sure it was thousands) of stairs we climbed to reach the platform, but more likely it was the art itself that sucked the air from my lungs when I first saw it. I kept repeating one phrase over and over as I gazed upon the detailed statues, carvings and scenes carved into the glowing white rock...."No manches. No manches. OMG, no manches, no...man....ches.*" It appeared to have been made yesterday by imagineers of Maya Disney, it was simply THAT good that I couldn't believe it was 2000 years old. 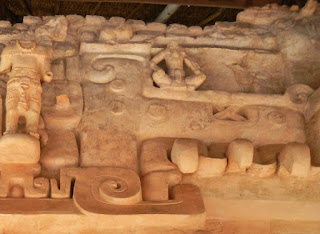 Ek Balam is a very "young" city in one regard, investigations into the site only began in 1997 (unlike other sites in the Yucatán Peninsula that were plundered researched in the 1800's). There is still much to explore and learn from the site and most of the research is still not published or publicly available. It is essential to hire a guide for this experience, the locals have worked closely with the archaeologists and have information that you won't find anywhere else. (I personally believe that seeing an archaeological site without a guide is like watching a movie with the sound muted, pretty pictures, but the story is lacking). The site is not well-visited, you will not find hordes of camera-toting, gawking tourists in socks-with-sandals style or vendors hawking their goods made in China. It is a peaceful place, the ancient energy permeating the earth and air, hippies sitting in lotus position dot the grounds as they try to connect with the vibe, man. And even the not-so-hippy folks will feel it. 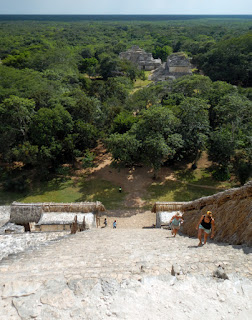 I won't tell you how to get there, I'm going to keep it my little secret. (Well ok, Google if you must, the info is out there.) Visit soon, before the bus tours find it. Don't rush, take your time. Spend the weekend in the pueblito of Ek Balam at the charming Genesis Retreat. And most importantly, please take the word "ruin" out of your vocabulary when discussing the ancient Maya cities (unless doomsday** really is upon us and the world is turned to rubble, then use it to your zombie heart's content!)

For more photos, please see my Ek Balam Pinterest board

How right you are. Visiting Ek Balam is probably what a visit to Chichen was like a couple of decades ago. It's a beautiful, peaceful place, well off the tourist track and well worth the visit.

I am with you on the term "ruin." Of course, as an archaeological hobbyist, there are quit a few popular terms that my teeth on edge.

You are so right, I've never really though about the real meaning of the word ruins.

I haven't had the pleasure to be in Cancun, but for what I see in pictures this are not ruins.

Thanks for sharing, greetings from Puerto Penasco.

Very nice place, I have been visiting it for years and you have to take time to see the whole place and travel by roads