Xenotes: A New Experience in the Riviera Maya 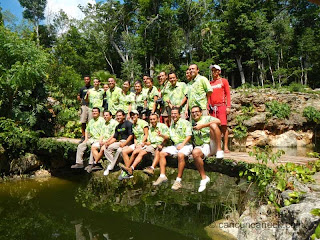 Anyone who knows me at all knows that I looooove me some cenote action. Hopping in the car and cruising down south to refresh in the cool waters, do a little snorkeling and jump off some cliffs, it's a pretty regular weekend thing for us here in Cancun. I've been hearing all about the newest park from Xperiencias Xcaret called "Xenotes" and was excited to receive an invitation to a fam trip to check it out this past weekend.

The friendly public relations staff greeted us at the meeting point and after a few minutes of teasing them about their waiter-like uniforms (dos micheladas por favor!), we boarded the bus to make our way to Puerto Morelos. It was the usual gang of social media folks and press and the giggles started early, it's always nice to travel with a group of fun folks who are really knowledgeable about the region. (Y'all know who you are, abrazos!) 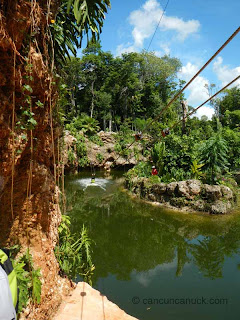 The drive took us down the cenote route near Puerto Morelos, faaaaaar down the cenote route actually. I've visited cenotes in this area before and was really looking forward to seeing what Xperiencias Xcaret had discovered. We arrived at the first cenote, enjoyed a little coffee break and were introduced to the park by the Director.  We donned our life jackets, had a little shower to rinse off any contaminants and our group "Zotz" (the bats) skipped down the path to our first stop, starting the day with a zipline ride landing in the water. This first cenote "K'áak" or "Fire" was beautiful! We swam past a couple of waterfalls and enjoyed the rocky views around us after we had made our zipline splash. There were optional inner tubes, but it was so hot that most of us chose the refreshing swim instead. 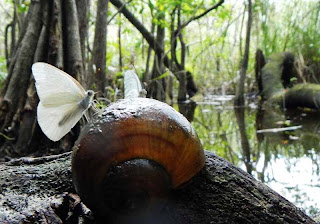 We visited three more cenotes over the course of the day, each with its own unique characteristics and activities. In our travels in between we marveled at the thousands (oh yes, thousands) of butterflies that were swirling around us, it was like nothing I had ever seen before! 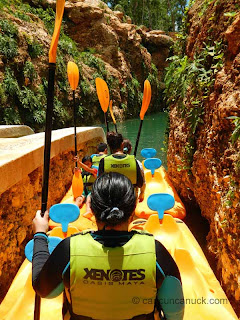 Ready to kaya in cenote "Ha'"

In cenote "Ha'" or "Water" we got an underwater view while snorkeling, little fishies and pretty water lilies and we paddled along a gorgeous stretch of water in kayaks. In cenote "Iik'" or "Wind", we flew through the air on a couple of different ziplines and splashed down for some huge laughs. We took a little break here for a delicious lunch, a luxurious picnic with yummy soup, sandwiches and rich brownies (and don't forget the wine and beer!) The last stop of the day was at cenote "Lu'um" or "Earth", a closed cenote which we entered via a controlled descent from a tall tower (kind of like rappel, without all the work). This was a cathedral-like cenote with a soaring roof, dangling vines and the coldest (and most refreshing!) water of the day. We took turns taking flying leaps off the ledge into the crystalline waters until it was time to go. 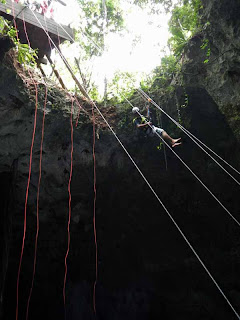 On the bumpy ride back we serenaded each other with song and the Zotz team formed a bond for life. It's one of the things I liked best about this tour, they only take small groups at a time and it is a great way to make new friends, enjoying a day in nature, no technology (though for some of us the lack of a cel signal was a little harder to handle than for others, snicker) and reconnecting with the universe and friends. 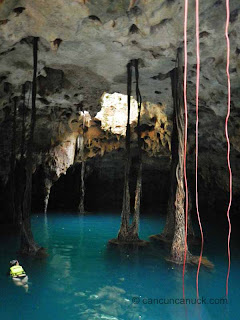 For more photos, please visit the Xenotes set on Flickr! I am working on editing some videos too, soon, soon!