Ok, can't name ten? You can probably name at least two, the emblematic Frida Kahlo and her muralist husband Diego Rivero. The pair became famous in the early part of the 20th century not only for their artistic work but for their politics and the drama of their personal lives. Hollywood brought their story to the big screen in 2002 with Selma Hayek in the starring role of Frida, the uni-browed, outspoken, ballsy artist who battled health issues and turbulent relationships and documented her life on canvas. Her self-portraits grace the walls of museums and tacky souvenirs alike, making her one of the most recognizable artists of all time. 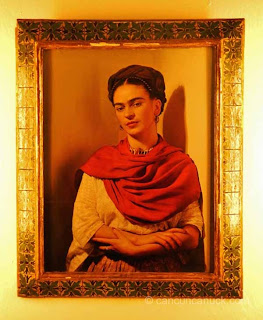 The Frida Kahlo Museum in Mexico City is located in the Coyoacán district in the "Casa Azul" where Frida was born, grew up, shared her married life with her volatile husband Diego and eventually died. Four years after her death, the house was converted into a museum, allowing visitors to view work by both Frida and Diego, their collection of Mexican folk art, photographs, art supplies and household items, a true time capsule, the house has not changed much since 1951. 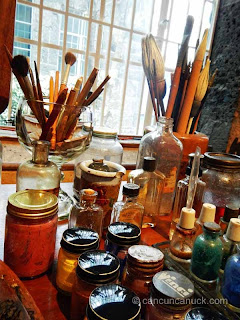 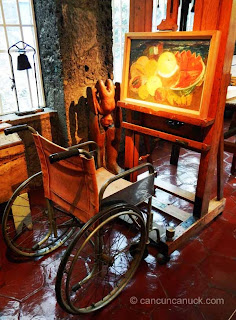 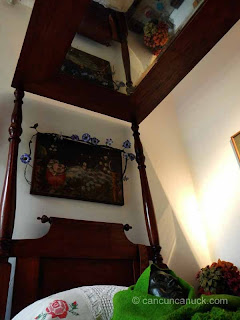 Frida Kahlo was also well-known for her fashion statements, her wardrobe always carefully selected to highlight her cultural background and to disguise the physical ailments she suffered as a result of childhood polio and a horrifying accident when she was 18 years old. After her death, Diego Rivera insisted that her clothing be locked away and it was not until 2004 that the doors were unlocked to reveal a "blast from the past" look at this fashion icon's sense of personal style. 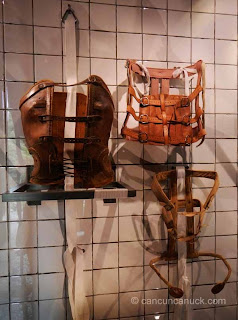 A sampling of Frida's medical corsets 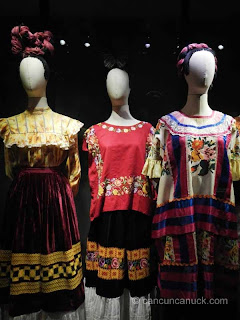 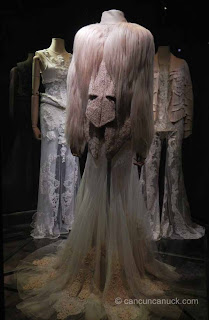 The full "Tehuana" skirts used to hide her disfigured legs, the loose peasant blouses disguising the leather and plaster corsets she was forced to wear and the custom, hand-painted shoes she wore with hidden lifts are now on display in the accurately titled "Appearances Can Be Deceiving" exhibit. The exhibit also includes contemporary designs inspired by Frida Kahlo, even this long after her death her style continues to impact the art and fashion world.

I had wanted to visit the museum for a LONG time and this past weekend was fortunate enough to be able to cross it off my bucket list. Well worth a visit when in DF (pronounced "deh efay", the "real" way to call Mexico City). Unfortunately it was the only attraction I was able to visit on this trip before I got whacked by altitude sickness! Next time, Teotihuacan and Templo Mayor for sure! Click to see more Frida Kahlo Museum Photos .

Yay! It's wonderful, isn't it? Didn't you want to lie down in her bed? I did! And I wanted to try on her clothes. I could feel her in the house. :)

Wow ... someone with a camera and another on the bed. When I was there there were no photos or touching anything. Hmmmm

A Taste for Travel said...

Sounds fascinating...can't wait to see it in person!